InXile Entertainment have launched their Kickstarter campaign for their roleplaying game, Torment: Tides of Numenera.

This game is a spiritual successor to Planescape: Torment, the 1999 PC game which is widely regarded as the best (and certainly the best-written) computer RPG ever made. Eschewing traditional fantasy conventions (no elves, no dwarves, precious few action sequences), the game delved deeply into themes of identity, responsibility, consequence and if people can every truly change themselves. It sold modestly but has attracted critical acclaim like no other RPG in history.

Since inXile do not have the rights to the Planescape setting, they are instead setting this game in a different universe altogether. The setting is Numenera, a pen-and-paper setting conceived by Monte Cook, one of the chief designers on the 3rd Edition of the Dungeons and Dragons game. The setting is Earth, approximately one billion years in the future. Our world has been rendered almost unrecognisable over that time, having gone through technology-driven utopian periods and multiple catastrophes. The planet is littered with the remnants of ultra-advanced technology that no-one understands any more (the 'numenera' of the title), not to mention alien and genetically-engineered lifeforms. There are echoes of Jack Vance's Dying Earth and Gene Wolfe's Book of the New Sun in the descriptions of the setting. This isn't Generic Medieval Landscape #35. 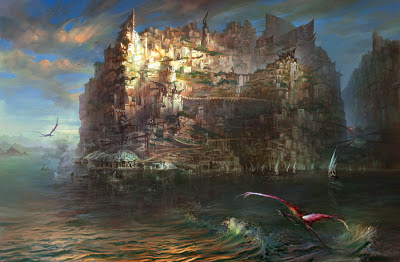 The plot of the game involves a being who is capable of skipping between different bodies, which are lifeless husks before and after he uses them. Somehow, one of the husks comes to life after he has vacated it. This creature - you - then has to search for identity and the answers to several mysteries (like, presumably, the identity of the body-jumper) along the way.

The game will be an isometric role-playing game, created using the Unity Engine. It will feature combat, but as with Planescape: Torment it will almost all be avoidable, with your character able to use dialogue or skills to resolve confrontations rather than violence.

InXile are asking for $900,000. They are certainly going to hit this, given that the total right now (just a couple of hours after launch and with a month to go) is $150,000. Amounts raised beyond that will allow for more elements to be added to the game. InXile have also guaranteed that they will pass on 5% of any excess to fund additional Kickstarter projects.

Torment: Tides of Numenera will be released in late 2014. InXile will ship Wasteland 2 at the end of this year. As they mention in the pitch video, with Wasteland 2 now in full development on the 3D and content side of things, their concept artists and writers are now free to fully commit to Torment (otherwise they'd presumably be left with nothing to do for six months or would have to be let go), explaining the timing of the appeal.
Posted by Adam Whitehead at 14:32

Incredible. They have already reached their goal. Must be some new kickstarter record...

I'm looking forward to this.

They were funded in 6 hours? I have to admit to being curious about this game now.

Yep. $900,000 in six hours for a product that doesn't even exist yet. I know it's not necessarily easy to harness this storm (eg for original games without a track record, rather than nostalgia games by big names), but... that's got to suggest there's some sort of demand that the existing game production framework isn't meeting.

Oh, and although I had a lot of doubts at first, and remain cautious, so far the concept art and the descriptions look loin-stirringly exciting.