On a lighter note: BioShock Infinite

BioShock Infinite was released today. Whilst I merely enjoyed BioShock, not considering it the revolutionary FPS gamechanger a lot of other reviewers did, I was intrigued enough by the new game to check it out on release day. 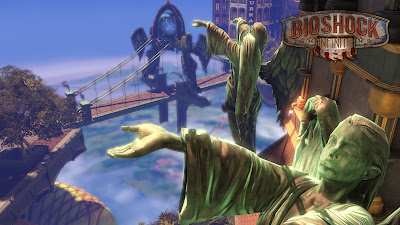 Just three hours in so far, but it's an immense improvement on its forebear in every way. Richly atmospheric, the game has stunning art design and some unusually good writing, not to mention a very weird undercurrent to the tone. Something that is very impressive is the way the game uses the founding history of the United States as a form of mythology, with statues of Washington, Jefferson etc. that depict them almost like Greek gods. The utopia's undercurrent of fascism is also carried out well. The first time you hear casual racist slurs in the game it's a bit of a surprise and the game continues trying to unnerve the player from then onwards.

It could all go to pot in the remaining nine hours (approximately), but so far, cautiously impressed.
Posted by Adam Whitehead at 18:03