New SPACE HULK game will be influenced by XCOM

A new Space Hulk game is on its way from Full Control Studios. It will be arriving on PC at the end of 2013, with an iOS port to follow. 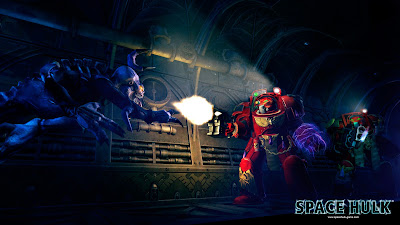 Space Hulk is a sub-set of the Warhammer 40,000 universe. The game features Space Marines storming an ancient derelict spacecraft (the hulk of the title) which has been taken over by genestealers, a hardy breed of space-going Tyranid (one of the principal enemies in the WH40K setting and, we have to legally add, in no way was the inspiration for the Zerg in StarCraft, ahem). Because the genestealers are so hardcore, even the normal Space Marines (eight-feet-tall, genetically-engineered superhumans) are no match for them, so the even more massively-armoured Terminator Marines have been deployed instead.

The game started off as a board game, released to critical acclaim in 1989. Every time Games Workshop has re-released it (the last time in 2009), it's sold out in days. Electronic Arts have also released two successful computer games based on the franchise, Space Hulk (1993) and Space Hulk: Vengeance of the Blood Angels (1996).

The new game is taking inspiration from XCOM, my favourite game of last year. In particular, they using similar line of sight and overwatch systems (overwatch actually being present in the original board game), but they are also using action points. The game will resolutely be turn-based, but with action cinematics showing the outcome of your orders.

So far the game is looking impressive. If they nail the potential, this could be a superb strategy game.
Posted by Adam Whitehead at 18:20