Watcher of the Dead by J.V. Jones

Raif Sevrance is in possession of the sword known as Loss. Unfortunately, he is also the 'guest' of a renegade group of Sull, who are determined to use him and his abilities for their own ends. Elsewhere, Ash March finds herself in the heart of Sull territory, knowing she will find in them her greatest allies...or her greatest danger. War continues to rage in the clanholds, with the armies of Blackhail, Bludd and Dhoone converging as Gandmiddich for a climactic showdown. In Spire Vanis the new surlord struggles to hold onto power, and in the wilds the ranger Angus Lok relentless hunts down a wily enemy. 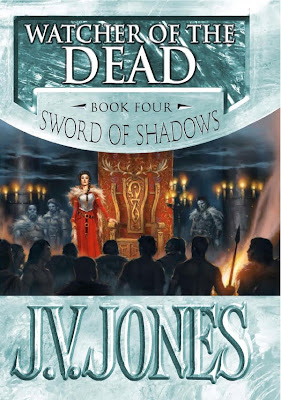 Watcher of the Dead brings the Sword of Shadows series to its fourth - and hopefully penultimate (though Jones has hinted that the series may expand to six volumes) - instalment. It's a slightly slimmer novel than its forebears, being a clear 100 pages shorter than the third volume, and benefits from a tighter focus on the core storylines. Raif and Ash get a fair bit of attention, whilst Angus Lok returns to the fore after spending most of the third book missing. Effie's storyline also moves forward more satisfyingly, with her relevance to the main storyline becoming clearer. The Dog Lord and Raina Blackhail also benefit from contrasting storylines in which both seek to consolidate (or re-consolidate, in Vaylo Bludd's case) their authority in the face of opposition.

There are some drawbacks to this. The tightened focus mean there's no time or room for Crope and Baralis, who simply fail to appear. Also, a tight focus on a large cast in a more constrained page count means a relative lack of major progression in any one arc. So Effie spends most of the book in a roundhouse in a swamp and then takes a short trip in a boat (although a hugely important one). Raif spends almost the entire book as a prisoner of the Sull. Ash, having set out to reach the Sull Heart Fires at the start of Book 2, finally gets there halfway through Book 4 and has a couple of conversations (and the revelation of a 'major' plot twist which is tiresomely predictable, the first disappointing plot turn in the series to date). Important things happen in these chapters, but there is definitely a contrast to the very busy and forwards-moving first volume in the series.

Still, the series has never been action-packed and fast-moving, and Jones does give us some good battles. Raina Blackhail's storyline in fact is particularly strong, aided by the arrival of an intriguing new character, and Angus Lok's revenge storyline is extremely tense. Best of all is Raif's character arc. Back in Book 1 he was the very embodiment of the 'callow youth saves the world' trope, but by the end of this volume he is a severely traumatised, battle-hardened warrior desperately searching for himself. The subversion of the traditional fantasy hero's journey is very well-done.

Watcher of the Dead (****) benefits in some ways from a (slightly) shorter page count and tightened focus, but it also suffers from it, with a lack of plot progression in some storylines and some characters simply not showing up. The benefits to characterisation are clear and there are clear signs of the scattered characters starting to come together, but we're not on the home straight yet. The novel is available now in the UK and USA. The fifth volume, Endlords, is apparently still forthcoming but there has not been a firm update on its status from the author in more than two years.
Posted by Adam Whitehead at 09:34

Email ThisBlogThis!Share to TwitterShare to FacebookShare to Pinterest
Labels: j.v. jones, the sword of shadows, watcher of the dead

I didn't enjoy the book nearly as much, after such a long time I had a hard time getting in the story again and I found the plots of many minor characters quite boring and there was not much development of the story.

Just checked http://jvj.com and Julie has left a short message about book 5. Thought you might want to know!

Hasn't that message been up there for ages? I distinctly remember seeing it quite some time ago.

Pat from Pat's Fantasy Hotlist is chasing up the current state of play, so hopefully we should get some more updates soon.

Ahhh rightio. It probably has been up there for a while, shows how long since I visited there.