The Grim Company by Luke Scull

Davarus Cole has a destiny. Only he can wield the sorcerous blade Magebane, one of the few weapons in existence that can kill a Magelord. Five centuries ago the Magelords slew the gods themselves, becoming immortal in the process and seizing control of the world. Now they wage war amongst themselves. Cole knows it is fate itself which has decreed that he will kill Salazar, Magelord of Dorminia, and liberate the city from his tyrannical rule. His comrades in the rebel group known as the Shards are less sure. 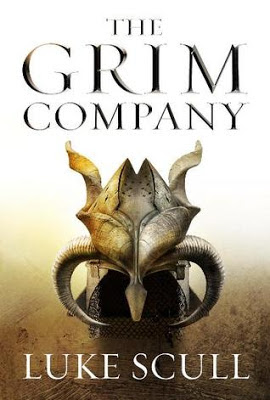 Meanwhile, a new threat is rising in the far north. Demonic forces are spilling into the northern mountains and the Shaman, the Magelord who rules the region, must face this threat whilst also confronting a renegade lord who has turned against him. At the same time, he owes a favour to Salazar that must be repaid.


The Grim Company is the opening volume of the fantasy trilogy of the same name. It's the debut novel by Luke Scull, a computer game designer who has worked for BioWare and Ossian Studios. It's also one of the SFF launch titles for Head of Zeus, a new publisher which won the publication rights to the novel in a significant auction.

It's easy to see why. The Grim Company is a rollicking dark fantasy adventure novel. It moves with verve and pace, fitting more plot than some entire trilogies into its lean 450 pages, and is threaded through with a great sense of humour that pokes fun at some of the conventions of both epic fantasy and the recent eruption of 'grimdark' fantasies in particular. The book packs in an impressive number of subplots, locations and characters without feeling rushed or overburdened, and manages to ensure these storylines are not extraneous material (one side-plot taking place hundreds of miles to the north in the mountains feels like pure set-up for later novels, but is linked back into the main storyline quite impressively in the climax).

Character-wise, we are in familiar archetype territory. Davarus Cole is a fine 'pratagonist', the apparent hero who's actually a barely-sufferable pillock. Cole believes it is his destiny to be awesome and free the people from tyranny, but he suffers from a blinkered view of reality and a tendency to ignore what's going on right in the moment (occasionally even during moments of high danger) as he daydreams of gaining the adoration of screaming crowds. This is frequently hilarious, but also gets close to becoming overused by the time we get to the novel's climax. Thankfully, some well-handled moments of character revelation near the end of the book show Cole to be a more sympathetic character than might have been first expected.

Brodar Kayne is the former Sword of the North, the Shaman's champion who defied his master and is now on the run, assisted by his exceedingly temperamental and borderline psychotic best friend, 'the Wolf'. Kayne is old and past his best days, but still exceedingly lethal with a greatsword. His only weakness is a sentimental streak, which leads him into a doubtful alliance with the Shards. Kayne is the 'actual hero whom Cole is trying to be' and Scull finely contrasts the differences between the two characters. There's nothing particularly new or notable about Kayne, but Scull pulls off the 'grizzled veteran with a dark past who is now trying to be a better man' trope reasonably skillfully.

Elsewhere, we have Eremul the Halfmage, a sorcerer whom Salazar spared during a purge of potential rival magic-users but still left crippled. Then there's Isaac, Eremul's apparently bumbling aide who turns out to be unexpectedly good at, well, everything. Particularly well-done is Barandas, the head of Salazar's Augmentors (magically-enhanced super-warriors), a good man serving a ruthless and amoral ruler because of his strict code of honour. There's also Sasha, another young member of the Shards who is actually good at her job and not an insufferable prat, and Yllandris, a young sorcerer and lover of the King of the Fangs who likes to think of herself as a badass witch and master manipulator but has too much of a good heart to really pull it off.

Aspects of the novel do feel somewhat familiar. The post-apocalyptic fantasy setting and the notion of a band of rebels gathering to pull down a tyrant is reminiscent of Brandon Sanderson's Mistborn trilogy, but The Grim Company is certainly a more striking and fun novel than The Final Empire. The Shards being a band of rogues rather than purely idealistic rebels also recalls some elements of Scott Lynch (particularly the brothers), though the story then goes off in a completely different direction. Much more notable - and probably will be mentioned in every review of the book ever - are the similarities to Joe Abercrombie. These include some of the basic archetypes (though Cole, Kayne and Eremul's similarities to Jezal, Logen and Glokta are thankfully only superficial), the similar black and self-aware humour and some the language, most notably their mutual enjoyment of the word 'fruits' as a euphemism. Indeed, if you enjoy the works of Abercrombie, I can unreservedly recommend The Grim Company with no hesitation.

For those who are less keen, Scull uses magic in a more interesting manner, and his worldbuilding craft is certainly stronger, but it's likely that if you are really not a fan of Abercrombie and the more recent similar eruption of similar fantasies, this will not do a lot to impress you. The author is certainly aware of the pool he's swimming in, and occasionally seems to lampoon it, but it's also not an outright satire of the genre and does play a lot of the tropes straight (though, refreshingly, his female characters are as well-portrayed as his male and that most overused of 'grimdark' plot devices, rape, is kept for the most part off-page, though not unmentioned).

The Grim Company (****) is an energetic and well-written dark fantasy debut. It doesn't steer far from familiar waters, but it combines standard tropes and ideas into a more than satisfying whole. The novel is available now in the UK and on import in the USA.

If you are in the UK, you can also download a massive free sample (approximating about two-thirds of the full novel) here.
Posted by Adam Whitehead at 18:15

Currently £1.71 in the UK Kindle store, so definitely worth a punt if (as with me) this review has piqued your curiousity!

It in general sounds too cliche to take seriously, though I note your approbation... however, what leaves me giggling from this is that the land of Eevillnys is apparently ruled by Professor Salazar! Presumably its neighbouring countries (Dharknesss, Tiranié, and Myldinkonveeniance) are ruled by Messrs Hitler, Franco, and Mussolini?

Is the author entirely ignorant of the real world, or does he just assume that we are?

Currently only 2.14 EUR at Amazon DE.
I could not resist to buy a copy after reading your helpful review.

Thank you for a convincing and helpful review.

I bought a digital copy at DE Kindle store for just 2.14 EUR.

I have to wait until September... So I'll be pouting until then. This one looks frekin awesome.

Thanks for the great review - saw this on Pat's blog and (not being a fan of his reviews), was hoping I'd find a review somewhere else. Definitely looking forward to this!

Thanks for the review, definitely looking forward to it. :-)

Head of Zeus just sent me a copy. Now just have to find time to read it.