Terry Pratchett has announced that the next Discworld book, likely to be out at the end of this year, will be entitled Raising Steam. He made the announcement via a Skype webchat. 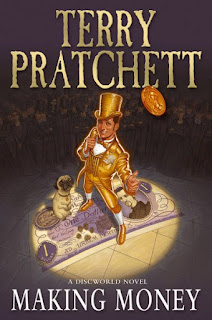 Pratchett announced the book by holding up a card saying "RAISING", at which point the Skype connection cut out. Pratchett had previously announced that the next Moist von Lipwig novel would be called Raising Taxes, so fans immediately assumed it was going to be that. However, it was then clarified that the book would actually be called Raising Steam. It has no release date as yet, and no further details have been announced.

Speculation: given Pratchett's way of announcing the book, which was clearly teasing fans curious about the long-MIA Raising Taxes, I'd guess this was indeed the new Moist von Lipwig book. Pratchett had previously said that he was having difficulty making the tax-based book interesting. This is understandable, given that Making Money - Moist takes over the Ankh-Morpork Mint - was fairly close to being a retread of Going Postal - Moist takes over the Ankh-Morpork Postal Service - as it was. I would guess (and to stress this is guesswork) that Pratchett has taken Moist out of the tax office and put him in charge of the Undertaking, Ankh-Morpork's under-construction subway system. This also allows Pratchett to do the 'Undertaking book' he's been hinting at for a few novels in a row now. 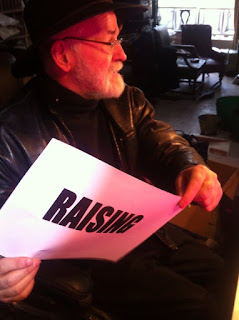 Of course, this might be in error and Raising Steam could be about surface trains or even an outright steampunk satire, and not involve Moist at all. I guess we'll find out soon enough.
Posted by Adam Whitehead at 18:35

If I recall correctly, he recently announced that the book he was working on (which, presumably, is this one) is about an entirely new character. So I doubt it's Moist.

Adam perhaps you do a TP retrospective. I found I got up to Men at Arms and just lost interest after than.

At first glance at the title, I think it will be about steam trains evolving on the Disc.

I'd love to see some steampunk satire, personally. Gotta catch up on the last Discworld book first though.

Whatever it is, it's going to be great! Terry Pratchett never disappoints!

Haha golem steam drivers! The patrician having his own carriage! The train undergoing a robbery, getting Vimes and his team involved! The possibilities are endless! As a fan of both trains and Pratchett... I for one, am very very excited!!