Eddie Riggs, a roadie for an underwhelming rock band who bemoans the death of 'real' metal, is transported into a hellish world where humanity is kept in thrall by demons. Discovering that in this world music has real power, manifesting as combat abilities, Riggs joins a rebel army that is trying to bring down the demons and helps them organise for one last battle against the darkness. 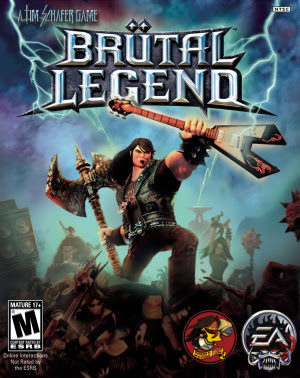 Brutal Legend is a curious game. It's a heavy metal/comedy/action/real-time strategy game set in an open world and featuring personal combat and driving sections. The game feels like it was made by Double Fine Studios taking every 'awesome' idea they could think of and hurling it at the wall to see what would stick. It certainly feels like a game that lacks a clear vision of what the developers wanted it to be, and whilst it may be an adequate jack of all trades it is a master of none.

The game opens as an action title, with you directly controlling Eddie Riggs. You can kill enemies with your giant axe or electrocute them or set them on fire with special attacks from your guitar (which overheats if you use it too much, limiting its use). After a few minutes of this the game seems to get a bit bored, so Eddie spontaneously builds a car out of scenery, has a boss fight and then roars out into an open world, which you can explore to your heart's content (if only briefly; it's fairly small as these things go) to find unlockable skills, upgradable powers and optional side-missions. When you pursue the game's main storyline, it then rather abruptly transforms into a strategy battle game.

In this battle mode, you have a command centre - your stage - and an enemy HQ - their stage - that you must destroy. You gain resources in the form of adoration from fans, who issue forth from geysers (I think the heavy metal/RTS metaphor was straining a bit here) which you can tap into with merchandise stalls. With more resources, you can build more troops and upgrade your stage's capabilities. As the game continues you unlock more units, so you can build everything from a basic infantry grunt (head-banging nutcases) to a massive siege unit (a huge tank thing which call down fireballs from the skies). Your character, Eddie, serves as the commander and a powerful unit on his own right, and must join the fight directly to ensure the battles are won in a timely manner.

There is a big problem with this: Brutal Legend may now be out on PCs, but was designed for consoles. So rather than controlling the battles with a mouse, multi-unit selecting and intelligent hotkeys, you're instead struggling with a UI designed for console joypads. It's hideously slow and inefficient, requiring Eddie to be close to units he wants to give orders to (or constantly performing a tedious guitar solo minigame to summon units to him from across the map). Carrying out pincer attacks is therefore almost impossible. Indeed, the need to be simultaneously giving orders, building units and summoning them to you whilst also have to directly get involved in combat is initially overwhelming and confusing, with you losing battles due to having to fight the poor controls as well as the enemy. This problem eventually disappears once you get used to what units to build and in what order, at which point you simply steamroller the enemy and the game becomes trivially easy.

Brutal Legend is therefore a bit of a mixed bag. The humour, the writing and the voice-acting (most notably thankfully restrained performances from Jack Black and Tim Curry) are all top-notch, though some of the celebrity voice-overs are better than others. Rob Halford and Ozzie Osbourne give it their all, but Lemmy (from Motorhead) gives a fairly catatonic performance throughout the whole game. The game has a strong visual style, with the stylised 3D graphics complemented well by the excellent 2D artwork and the idea of a world based on metal album covers is successfully implemented.

The gameplay is all over the place, however. The solo combat sections are fairly decent, but quite brief, and the escort missions are a bit tedious (though a sequence in a dark swamp with Riggs riding a fire-breathing panther and having to clear a route for the tour bus is quite atmospheric). The battle sections make up a substantial chunk of the game's playing time and are unfortunately the game's weakest link, being poorly-controlled but ultimately far too easy. The game's single-player storyline is also fairly risible in length, clocking in at barely five hours.

All of that said, Brutal Legend (***) has a fair amount of wit, charm and imagination going for it. Like most of Tim Schafer's games, it's fun, but the gameplay struggles to keep pace with the ideas. It's definitely worth a look, but only if you can find it at a budget price. The game is available now in the UK (X-Box 360, PlayStation 3) and USA (X-Box 360, PlayStation 3). It is also available for PC on Steam.
Posted by Adam Whitehead at 11:08

I threw this game in the bin. Atrocious, badly implemented RTS elements ruined it. A truly abysmal game.

Abysmal console ports are the main reason why I'm spending way too much money funding promising PC-only games in Kickstarter.

The actual port is excellent. Graphically the game is big improvement over console versions and the game is fully customisable. The RTS section not being revamped for PC is annoying, but then they also didn't have much money for the port and completely rewriting a large chunk of the game would have been expensive.

I was referring to controls and menu structure really. All the graphics in the world don't help a game if you can't play it without tossing your keyboard through the window.

It's my main beef with Skyrim as well (besides the horrendous amount of bugs of course). That user interface is just not designed for a mouse/keyboard combination (I solved both problems through mods, but that brings another host of issues with it). Or the crappy inventory interface from the original Mass Effect. (The second one just did away with items altogether more or less. Problem solved I suppose ...)

So many games are designed for console first PC second nowadays and it shows in everything from simplified gameplay to limited use of hardware to the frustrating user interfaces. All to accommodate the use of gamepad controllers and obsolete hardware.

At least the next gen consoles are more pc's than anything else, so maybe there will be improvement.

I loved "Brutal Legend". The world was amazing to explore and the script was pretty awesome ("Your soldiers are revolting, Lionwhite, just like your clothes"), but some of the gameplay could get frustrating and one escort mission made me very angry.

But there are moments strewn throughout that make it a real joy. Even something like sitting in the rod and watching the world around you, with its beautiful nature and weather conditions, is as absorbing as a good novel. When the gameplay is going good, it is very fun. When it's not...

Also, apart from LeChuck and maybe GLaDOS, Doviculus is my favourite game enemy. He's so deliciously sexy and yet creepy. The guy is into some weird shit, and, talking of his "children" in multiplayer, says things like, "Your motion pleases me..."

Anyway, would recommend playing. I still get sad whenever I hear the Bladehenge song.

(Came here from GRRM's blog, by the way, and liking the site.)