More details on THE WORLD OF ICE AND FIRE

Bantam Books have released more info about The World of Ice and Fire, the companion guide to A Song of Ice and Fire. The book is due for publication on 29 October 2013 and will be 288 pages in length. They have also published several sample pages from the book. 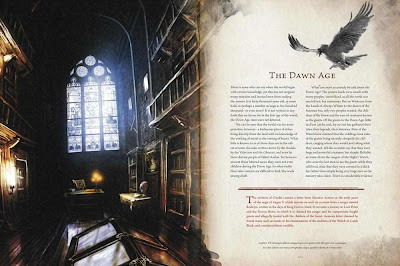 With all new history and material from the maester himself, The World of Ice and Fire is a must have for both long-time fans, new readers, and viewers of the HBO series, Game of Thrones. This lavish, fully illustrated, full-colour book will be the comprehensive guide to the mega-bestselling world that George R.R. Martin has established in his Ice and Fire books.

This will be the comprehensive guide to all things Game of Thrones and beyond. From the pre-history to the coming of the First Men, through the reign of the Targaryen kings and Robert's Rebellion, this guide-co-written by George R.R. Martin and the immensely knowledgeable founders and keepers of the www.westeros.org site-will tell series readers old and new all they might want to know about the history and culture of Westeros and the lands beyond the Narrow Sea. And there is a 30-page excerpt of all-new history invented by George solely for this volume.

ALL-NEW MATERIAL CONTRIBUTED BY GEORGE R. R. MARTIN: Much of the content of this book is all-new historical material, created by George exclusively for this volume—including a 30-page excerpt written by George.

FULLY ILLUSTRATED: The full-colour guide will be filled with gorgeous original artwork and maps commissioned exclusively for this edition.

THE HBO SERIES CONTINUES ON MARCH 31, 2013: HBO reported that 3.9 million viewers saw the inaugural broadcast of season 2, with 6.3 million tuning in among all of the network’s broadcasts for the night—a 53 percent gain from its freshman season average and a 27 percent rise from its previous series high. And with the DVD of season two releasing the month before, they only expect demand to rise.

SURGE IN NUMBERS: Since the show’s premiere, novel sales have increased exponentially, proving that people who get a taste of this world are keen to devour all there is about it.

SUCCESS OF THE NOVELS: To date, there are over 21.5 million copies of A Song of Ice and Fire series in print, and over 4.5 million in eBook sales.

APP-ORTUNITIES*: This will serve as the perfect companion volume to the Ice and Fire app, released in November 2012.

A WINNING TEAM: George’s co-authors on this book, Elio Garcia and Linda Antonssen, are the founders of the www.westeros.org site, and probably know more about this world than anyone save George. In fact, they are the folks George calls when he forgets certain series details.

HOLIDAY GIVING: Perfectly timed for the holiday season, this volume is the ideal gift for the George R.R. Martin fan in your life.

TIMING: The MM edition of A Dance with Dragons will also be published in Fall 2013, which means extra publicity for George R. R. Martin.

Meanwhile, in a recent interview with Amazon, Martin confirms that he is continuing to work on The Winds of Winter, and is making progress ahead of HBO catching up with him (although noting that the gap is less than it was before).

* The Wertzone does not condone such use of bad puns.
Posted by Adam Whitehead at 12:36

Email ThisBlogThis!Share to TwitterShare to FacebookShare to Pinterest
Labels: a song of ice and fire, elio garcia, george r.r. martin, linda antonsson, news, the world of ice and fire

Well then. It's been a good two days for fantasy books. Further huzzah!

'There is none who can say for certain...' Really, this made it through editing? Very underwhelmed by the style and accompanying pictures as well...will definitely be giving this a miss.

30 pages of new material from GRRM - so does this mean there would have been 60+ pages if a chunk hadn't been siphoned off to fill his 'Dangerous Women' commitment due to his inability to complete a single novella?

That material that you see there actually hadn't gone through editing at all. They took draft text to try and quickly put together layout ideas for discussion, and I guess they then turned around and used it for the retailer catalogs. It's why some of the text is basically just lorem ipsum, too.

Editing is ongoing now. That particularly infelicitious grammatical error should be gone, as I went and fixed it myself a couple of weeks ago. :)

This retailer catalog preview was thrown together from unedited draft text which was simply used to illustrate layout possibilities. Editing's on-going now, and I promise that particularly infelicitous grammatical error was corrected a couple of weeks ago, as I fixed it myself.