A Man Betrayed by J.V. Jones

Jack and Melliandra continue their flight through the lands of Halcus, seeking refuge in the distant city of Bren. Meanwhile, the mad Prince Kylock has seized his father's throne and embarked on a bloody invasion of Halcus, committing atrocity after atrocity. In Bren, Chancellor Baralis and Lord Maybor have arrived to arrange the marriage between Kylock and the Duke's daughter, to the Duke's disquiet, as well as continuing their own bitter feud. And in the fighting pits of the city, a disgraced knight struggles to find his redemption. 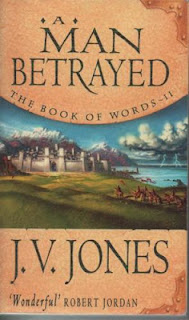 A Man Betrayed is the middle volume of the Book of Words trilogy and is a prime example of a novel that falls foul of 'middle book syndrome'. The book has no real opening and no real end (though there's a hell of a cliffhanger) and the plot is a mixture of dynamic forward movement in some storylines and some slightly tedious wheel-spinning in others.

In one of the more successful storylines, Melliandra is kidnapped (again), but this time around is able to turn her circumstances to her favour. She goes from victim to political player over the course of the novel in a transition that is convincingly-handled by the author. On the other hand, Jack's storyline becomes seriously bogged down. Jones clearly had to find something to do to prevent him from travelling straight to Bren and getting involved in events there, and somewhat unconvincingly lands him with a screwed-up family unit living in the backwoods and getting involved in a murder plot. There's some attempts to turn it into important character-building material for Jack but, aside from the titular betrayal at the subplot's climax, it fails to resonate. 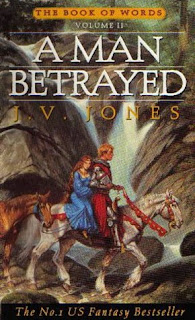 More successful is Tawl's storyline, which is a more traditional arc of seeking redemption following the heinous crime he commits (though unwillingly) at the end of the first volume. Though there is little surprising in this storyline, it's handled well by the author, particularly in the use of the previously tedious 'lovable rogue' Nabber to help Tawl along his path. Elsewhere, Baralis is as fiendishly (if occasionally cartoonishly) evil and Machivellian as ever, Maybor becomes a more interesting character and Tavalisk's observations-from-afar of the main plot remain amusing. Bodger and Grift (the trilogy's answer to Rosencrantz and Guildenstern) also get a bit more involved in the plot as well as providing the book's more comical moments.

Overall, A Man Betrayed (***½) is not without its shortcomings but is a stronger book than The Baker's Boy. Jones's writing has improved, and she juggles the multiple character arcs with confidence. Aside from Jack's repetitive storyline, this is an entertaining fantasy novel, though one that does not stray far from familiar ground. The book is available now in the UK and USA.
Posted by Adam Whitehead at 11:58

Email ThisBlogThis!Share to TwitterShare to FacebookShare to Pinterest
Labels: a man betrayed, j.v. jones, the book of words

Does anyone know what's happened to jv jones? Been a couple of years now since the last sword of shadows book without any news, her blog hasn't had a new post in as long and her forum has been overun by spambots.

She tends to go into total radio-silence when working really hard on a book. It's happened in the past, most notably during A SWORD FROM RED ICE, when no-one had a clue at all what was going on for a good four years or so. Given that the fifth SWORD OF SHADOWS book is also apparently the last one, I'd guess she's taking her time to make sure it goes well.

I really, really want to re-readd these books now:-)

Thanks Adam for reminding me what fun I had when I first read then!

Im half way through A Cavern of Black Ice and it is slowly becoming one of my favorite fantasy series ever. I hope by the time i finish Watcher that the last book will be out! It is really impossible to put this book down. Fantastic writer!!