When Mass Effect 3 was released a year ago, it was known that the game would be expanded by the arrival of extra missions via DLC (downloadable content). Because the game's (highly controversial) ending made any more missions set after the game nonsensical, these DLC episodes take place earlier during the game's timeframe, and can be accessed via the save the game automatically generates when you finish it (to just before the assault on the Cerberus base). 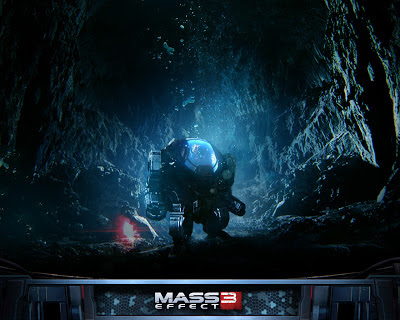 The first of the two story-driven DLCs to appear so far is Leviathan. This episode picks up on a dangling plot thread from Mass Effect 2, where it was revealed that a Reaper named the Leviathan of Dis had been destroyed by an unknown force of tremendous power. In the DLC Commander Shepard is contacted by a scientist who has discovered what killed Leviathan, but is killed himself before he can impart that knowledge. Shepard has to follow the scientist's trail of research to discover the location of Leviathan's killer, and whether it can be employed to help in the war against the Reapers.

Gameplay-wise, Leviathan is split into two distinct sections. The first section is set in the scientist's lab and sees Shepard investigating artifacts and computer logs to piece together a fuller picture of what happened. Several excursions via the Normandy to alien planets follow, with traditional combat missions (and one creepy mission dealing with a base full of indoctrinated scientists) leading to the discovery of more clues. The DLC concludes with an underwater showdown between Shepard and Leviathan's enemy, which is a bit cheesy and mainly seems to serve as a bit of retconned foreshadowing for the end of Mass Effect 3 proper (and as such may be enjoyed more by people playing through the game for the first time with all the DLC pre-installed).

Leviathan is, from a gameplay perspective, lightweight but from a lore and story POV, a bit more interesting than expected. There's some major backstory revelations about the Reapers and some very good character-building for EDI, who gets to play a big role in the investigation sections. 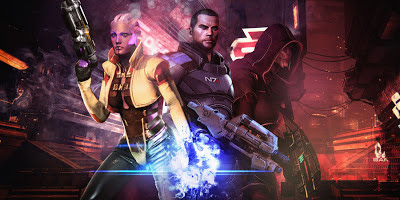 The more eagerly-awaited of the two DLCs was Omega, which picks up on another plot thread left dangling from Mass Effect 3 proper. In that game it was revealed that Cerberus had taken control of Omega, the 'hive of scum and villainy' that you spent some time on in Mass Effect 2. Omega's crimelord boss, Aria T'Loak, was unimpressed by this move and spent most of Mass Effect 3 trying to build up a coalition of forces to retake Omega. In the DLC she succeeds, and employs Shepard (and just Shepard; none of the rest of the Normandy crew can take part) to help out.

Omega is a long series of combat missions, undertaken with Aria T'Loak and a new character called Nyreen Kandros, the first female turian encountered in the series. The absence of most of the regular Mass Effect cast and the inability to choose your own squad for the combat missions is grating, but the game is able to turn this to its advantage by focusing on the characters of Aria and Nyreen and developing a complex backstory between them. The DLC is interesting in that it's one of the few chunks of the Mass Effect universe where Shepard is more of an observer of events rather than the crucible around which they revolve, and is more interesting for that. The DLC also features a better-than-average villain in the form of General Petrovsky, a Cerberus officer who is unusually sensible and logical for a bad guy. Arguably the DLC's real triumph is in allowing Aria (one of the most unrepentantly amoral characters in the whole series) to soften a little under Shepard's influence without destroying the character, and doing so through some via good characterisation related to the new character of Nyreen. It's a subtle element that's rather under-developed given the combat-oriented nature of the DLC, but one that gives the episode more depth that it first appears.

Both DLCs (***½ each) are playable, fun and feature some lore and background revelations that enhance the enjoyment of the Mass Effect universe. However, they are also rather short (2-3 hours each) and the degree to which players smarting from the mishandling of the ending of Mass Effect 3 proper will want to play them is debatable. They are available now on the X-Box 360, PlayStation 3 and PC.
Posted by Adam Whitehead at 14:39

I am enjoying the Leviathan story line so far and need to download Omega. I thought I had and will have to double check but your description isn't ringing any bells. I got Mass Effect 3 for Christmas and it has been fun getting back into this universe.

I just want more Single Player DLC. I have played and don't much care for the multiplayer. The world that has been built and the characters I've come to know and love are useless in multiplayer.

Apparently there will be one more single-player DLC. Most of the main voice cast have recorded new dialogue for it, including Seth Green as Joker (who's never appeared in any DLC before).

There is a theory that with BioWare working on MASS EFFECT 4, the new DLC will be some sort of clue as to how ME4 will work, given ME3's radically different endings (assuming that ME4 isn't a prequel).