Games Workshop have, for a while now, claimed that they own the trademark to the term 'Space Marine'. They were largely ignored, because the term has an extremely long history in science fiction and is so generic (meaning 'marines in space') that the claim is borderline laughable. 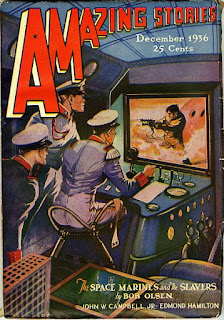 A use of the term 'space marine' that predates Games Workshop's by fifty-one years.

However, GW's mailed power gauntlet came crashing down on SF author MCA Hogarth when she published a book called Spots the Space Marine. GW asked Amazon to remove the book from their website and informed the author that she was not allowed to use the term in either the title or text of her book. Hogarth, who is not very wealthy, declined to fight the claim legally but has publicised it, which has led to significant discussion of the subject by sites such as Boing Boing and Scalzi's Whatever (and Scalzi is taking it up with the influential Science Fiction and Fantasy Writers of America guild, of which he is president). This site also has interesting information for those Games Workshop customers - and that includes anyone who has bought a Black Library novel or Relic WH40K computer game - who wish to protest directly to the company.

Games Workshop's use of 'Space Marines' began in 1987 with the publication of the first edition of the Warhammer 40,000 miniature combat game.

A quick survey of the internet discovers these examples of use prior to that time: 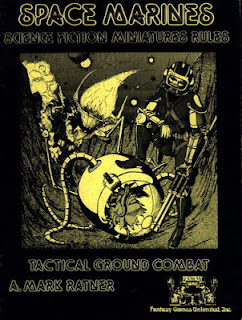 There is also the small matter of Games Workshop not attempting to protect the alleged trademark prior to this point, namely not when Dark Horse released a number of Alien comics and magazines in the early 1990s which sometimes used the term 'space marine' to refer to the Colonial Marines. They have also taken no action against Barnes and Noble, which has a sub-section called 'Soldiers and Space Marines'.

More notably, GW has not attempted to sue Blizzard Entertainment, despite the latter's creation of the StarCraft franchise in 1998 which is - sometimes breathtakingly - similar to Warhammer 40,000. The Terran Marines in StarCraft not only fulfil the same role as the Space Marines in WH40K but look extremely similar. Coincidentally, Activision-Blizzard is a multi-billion-dollar company with legal resources that vastly outstrip those of GW's by several orders of magnitude.
Posted by Adam Whitehead at 21:47

Wow, really?? That is the most blatant load of guff I've ever read about! I hope she is successful in finding a pro bono lawyer to help her out!

always nice when a company gets big enough to employ its own lawyers, who then look for ways to justify their wages...

I'm surprised GW think they have a leg to stand on.

Next they may claim to own the word "Nazi"....... Oh wait, that was another game company doing something incredibly stupid and destructive in the eyes if the fan base they depend on for support....

Hi,
My name is Dave "Knighthawk" Simpson. I host a Youtube channel called Gamers on Games. We just did an interview with Maggie Hogarth about her trademark dispute with Games Workshop. Please watch, subscribe, and share! We really want to help rally more support for her. Thanks!

Acually space marine is already a registered trademark for GW in Europe since 1999. So their claim isn't laughable.

Games Workshop's European trademark applies only to their models. It does not apply to fiction, novels and written works. Even if they had filed such a trademark, it is not automatically binding until tested in a court of law.

Nice Classification 16 list of goods and services: "Paper, cardboard and goods made from these materials, not included in other classes; printed matter..." = books.


Nice Classification 9 list of goods and services: "...apparatus for recording, transmission or reproduction of sound or images; magnetic data carriers, recording discs; [...] data processing equipment and computers;..." = ebooks might fit this category. But I'm not an expert in trademark law.