Stephen Donaldson has delivered the third and final draft of The Last Dark, the fourth and concluding novel in The Last Chronicles of Thomas Covenant. This will be the tenth Thomas Covenant novel overall, and is planned to conclude the entire series. 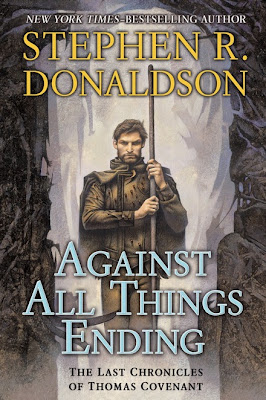 
I have just delivered the third draft of THE LAST DARK. Under the circumstances (the circumstances being that Putnams has already put the book on their schedule for October), I have no doubt that this will constitute D&A. For me, the next step will be copyediting; but of course my  publishers have a variety of things that they need to get done.

Just to provide a frame of reference: this draft is 932 pages (not counting WHAT HAS GONE BEFORE and the Glossary). I've done some rather draconian cutting, all of which I believe was necessary. I deliberately wrote the first draft *long* because I wanted to be sure that I didn't leave anything out. But the result was an unusually high number of repetitions and digressions; and weeding them out--while creating more effective or at least more efficient alternatives--has been a very long and arduous challenge.

The novel will be published in November 2013, thirty-six years and six months after the publication of the first novel in the series, Lord Foul's Bane.
Posted by Adam Whitehead at 16:51

I picked up Mordants Need volume 1 in our local library in 1986 at the tender age of 11 and Donaldson rapidly became my favourite fantasy writer. He's not everyone's cup of tea and I am aware of the infamous Clench Game that some play with his works but I'll always have a soft spot for his stuff.

The Final Chronicles haven't been as good as the first two- perhaps it's age, mine & his, but they've not struck the same chord that earlier tomes did.

Funny to think the entire Ill Earth War itself was about 11,000 words, about a chapter of the final volume of the Wheel of Time :)

Definitely looking forward to this! I devoured the first 2 trilogies in my early years of reading fantasy. While the 2nd was a bit repetitive, Donaldson worked such magic around his central themes, and established such vivid characters, I'm anxious to get caught up and give this final arc a read.

I couldn't care less for once. Lord Foul's Bane was one book I truly and utterly hated.
And I assure you I am not a hateful person

I'm excited! Been a fan since '78 -- and while the first book-and-a-half of the Final Chronicles were a bit tedious for me, the last book-and-a-half got much, much better. Can't wait for the wrap-up (even though I was perfectly fine with the original wrap-up ;) ).

I don't understand why he is still around. Lord Foul's Bane was so appallingly awful.

I've been waiting for this to be finished before reading the final series. Love the first and second Chronicles, some of my favorite fantasy of all time.

I think what Donaldson created with the character is incredible. I never really thought of him as an anti-hero either. Rather I ascribed to the theory that he is unable to think of himself as a hero, because of his intense self-loathing. But I think it's clear that to the people of the Land, he is a hero.

Ah Adam, I meant the actual War in the Ill Earth War, from Hile Troy's mobilisation of the troops on to the field, to the final destruction of the Raver's army at Garroting Deep. I did a word count on a txt document of the book once ;)

I would like to continue reading the rest of the books but the Second Chronicles are still unavailable on Kindle?

Donaldson has some well documented beef with the electronic versions of his books. If you do a search for e-books on his news page, http://www.stephenrdonaldson.com/fromtheauthor/news.php?Status=current

Thanks Alex, that's is discouraging news especially UK eBooks which was dated 12/1/11. The current news on top is bit hopeful.

The Last Dark will be published mid October 2013 in the US and UK. It will have 592 pages.

Those people who hate Lord Foul's Band and gave up on the series have done themselves the most severe disservice. The first part of Lord Foul's Bane will likely disturb most readers, but this is all for a purpose. Keep reading. The "harrowing" events (pun intended) in Against The End of All Things are also a grueling read, but this is the author making you experience.

Ive been a fan for years, however I think Donaldson should have perhaps stopped after White Gold Wielder..The final chronicles has been a difficult and arduous read..I just hope the final book has the desired ending after all this effort..I would like to stay faithful to one of our great writers.

I just finished "Against all things ending" and cannot wait until October for the final installment. Thomas Covenant has been my hero for years, not just a leper, but a man of our times, thrust into decisions that could actually save or destroy the world. Who here wouldn't be paralyzed to inaction with that kind of responsibility weighing on them.

I just started to read the first book in the series a few days ago, and now it seems like the last novel will be published before I have completed the first trilogy.

Anyone who has not read - and loved - the Chronicles of Thomas Covenant is not someone whom I can take seriously as a fan of fantasy. Donaldson is a genius.

I agree with some of the comments left by others.
The Final Chronicles are not as engrossing as the first 2, but I hold out hope for the ending being the redeeming factor.
Without a doubt, Lord Foul's Bane is a tough read, for various reasons, including how long it takes for Covenant to actually reach the Land (If you have read Erickson, it is like that!) But I agree that you have done a disservice yourself if you do not give The Illearth War a full read before giving up on the series

sharlto copley to play covenant in the movie