Andrew Dahl is a newly-assigned crewman on the Intrepid, the flagship of the Universal Union. Initially what appears to be a plum assignment turns into a nightmare. Almost every away mission turns into a lethal showdown with hostile aliens and crewmen are frequently killed, although oddly the bridge crew seem to survive every one of these encounters. As the situation becomes more bizarre and crew are slain by robots, alien worms and - somewhat unexpectedly - ice sharks, Dahl becomes determined to find out what the hell is really going on. 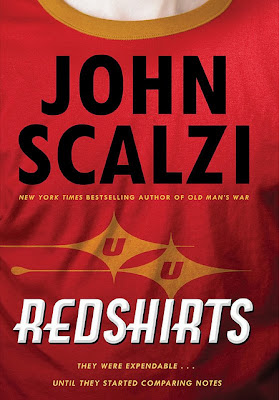 Redshirts is John Scalzi's tribute to all of those unfortunate extras and minor characters whose sole purpose in life is to show up for ten minutes and then die in a feeble attempt to make the audience believe the main characters might be in danger. It's a huge, nerdy in-joke that anyone who's ever sat through an episode of Star Trek should appreciate. Anyone who hasn't (and Star Trek and its cheesier tropes - distressingly - are getting a bit long in the tooth these days) might find the book pretty pointless.

The book starts off as a look at the workings of such a ship from the POV of the regular crewmen rather than the command crew (and yes, The Next Generation did a whole episode about that) but rapidly escalates into being a funny commentary on the aforementioned TV tropes before moving into a metafictional storyline about fictional characters coming to life before skewing sideways into a very ill-advised attempt at pathos (which falls completely flat due to a lack of decent characterisation, meaning we don't care). Scalzi seems to be aping funny SF authors like Harry Harrison, Terry Pratchett (whose Guards! Guards! pursues a vaguely similar premise, but altogether more successfully) and Douglas Adams. However, the premise of the novel is one that Douglas Adams threw into a TV documentary about his own life, explored and moved on from in about five minutes. Stretched over 300 pages, the premise becomes rather thin. Scalzi is a funny writer (though not in the same league as the aforementioned writers) and the laughs keep things ticking over, but despite a couple of attempts to make serious points (most notably in the codas, where the laughs dry up but the prose style improves markedly) the novel is pretty lightweight and disposable.

Redshirts (***) is an entertaining, easy read which will make you laugh for a bit but you will also completely forget about within a week. The novel is available now in the UK and USA.
Posted by Adam Whitehead at 10:44

Laughable but forgettable . . . probably the most forgiving review I've read yet. As an old-school Trek fan, I do have to find time to read this as some point, but at least I'm going into it with honest expectations.

I enjoyed it, but I agree that it's a "low impact" novel: easy to read (a real page-turner in fact), easy to forget. Part of the problem is that Scalzi tries to do the cheesy Star Trek, but he's doing it with an idea that would naturally lend itself to some very dark humor (or serious subject matter).

The set-up in the first half of the book would be terrifying, not funny, and yet the bizarre weirdness and terror of the arrangement only comes through on occasion.

The song is pretty catchy, though. Hats off to Jonathan Coulton.