George R.R. Martin has signed a two-year development deal with HBO. The deal includes extending his 'executive producer' credit on Game of Thrones for another two seasons and also gives HBO exclusive rights to any TV show ideas he creates in that time. 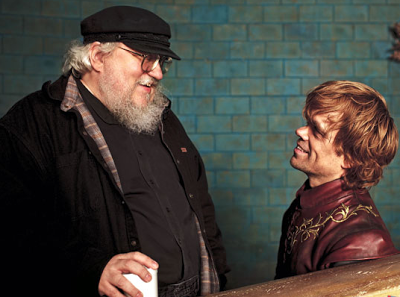 "So, Tyrion and Bronn bromance series?"


Development deals, out of favour in Hollywood during the financial crisis, have recently come back into vogue. J.J. Abrams has such a deal in place, allowing him to develop or produce new shows for several networks (two pilots based on his ideas have been greenlit for later this year). Abrams's deal allows him to develop TV projects whilst working elsewhere: he has been working full-time on his second Star Trek movie for the past eighteen months or so, and is about to plough into working full-time on Star Wars: Episode VII for anything up to three years.

On that basis, fears that this deal will delay The Winds of Winter (the sixth and currently-planned-to-be-penultimate Song of Ice and Fire novel) until the middle of next decade seem somewhat overstated, though it is possible will have an impact of some sort. It's also possible that this deal was made as a sweetner to keep Martin on-board with GoT, or that HBO are actively considering adapting some of Martin's back-catalogue and this allows them easier access to it.

In particular, there has been speculation that HBO are planning to adapt the Dunk and Egg prequel novellas as an ongoing (and perhaps more episodic) TV series. These stories - The Hedge Knight (1998), The Sworn Sword (2003), The Mystery Knight (2010) and The She-Wolves (forthcoming) - are set between 85 and 90 years before the events of ASoIaF/GoT, so would not impact on that ongoing main series. HBO have also done some subtle foreshadowing for the series, with Old Nan mentioning Ser Duncan the Tall to Bran Stark in a Season 1 episode of the show. It was recently confirmed that GRRM's prior deal with HBO did not include Dunk and Egg, so a new deal such as this one would be required to adapt them. With at least one major new character in the later novels set-up much better by the prequel novellas, it is possible that HBO are thinking about going down a similar route.

There has also been speculation that HBO might consider adapting the Wild Cards TV series as their own take on superheroes. However, SyFy and Universal own the Wild Cards TV and movie rights, so HBO would either have to co-produce or buy the rights outright from them, which would be unusual in Hollywood. A TV or film adaptation of Fevre Dream or one of Martin's Thousand Worlds SF stories and novels also cannot be ruled out.

Martin has yet to comment publicly on the deal, but will likely soon do so via his blog.
Posted by Adam Whitehead at 12:17

Mark my words, GRRM's gonna keel over and die Robert Jordan style if he keeps delaying a Song of Ice and Fire...

Hmmm...I don't know much about the rest of Martin's catalogue, so my inclination is that I'd like for him to produce and oversee an original show. The guy knows television, and as fun as GoT is it does bear the scars of being forced into the episodic format. I'm sure that if he could build something for TV from the ground up the results would be amazing. (Of course, I'd rather he finished ASoIaF before he got TOO wrapped up in this...)

Maybe something space opera-ish? Both because I don't believe it's a genre he's tackled, and because there's a definite lack of shows about space travel lately. (Is it just me, or are we living in the first period without a prominent show about space travel since the medium of TV was invented?)

"I don't want to hear about Duncan the Tall"

Yeah, a GRRM-originated TV show would be great once the books are done.

As for GRRM keeling over and dying because he keeps delaying ASoIaF, that seems somewhat improbable. Jordan didn't keel over and die, he was ill for two years before passing away and he didn't really delay his series either (though he did slow down with the last few books, though only to two years per book, a rate which GRRM fans would happily kill for).

Fans? I have a hard time believing there are still any after the "Dance with Dragons" debacle.

I'm a huge fan of GRRM and ASOIAF, and I'm very intrigued by what concepts he could come up with for an original tv show! Of course I eagerly await the books, but this is interesting news as well!

Yeah, the Dance With Dragons "debacle" did nothing to kill fan interest. There are more fans now than ever before. And I personally thought it was a great book.

I would hope GRRM's first priority is to get ASOIAF finished. But as Wert says, he knows TV, he's always talked about all the ideas and pitches he made in the past that were rejected. Time to dust them off it seems, now that he has clout and an exclusive deal.

This deal will absolutely hurt the novels. George is already a slow writer with too many projects on the table, and now he has this bright shiny object sitting in front of him to distract him even more.

And before anyone starts the "GRRM isn't your B*tch" comments, I ask you to go back and read this blog post by George himself where he talks about having too many projects, and how he needs to learn to say no.

He knows he's bitten off too much...

It would seem unlikely that GRRM would write that blog post and do the exact opposite (and I do have an inkling of how many other projects and appearances he has turned down since that post). That to me suggests that:

1) He does not think this project will take up any significant amount of time (rightly or wrongly).

2) The project is solely a way for him to get a good deal whilst HBO develops some of his other properties with other writers.

3) The deal basically consists of him saying, "Hey, this is a cool idea," and HBO taking it off to do something with it.

The problem with development deals is that they are somewhat imprecise things. Some of them call upon the writer to sit in a Hollywood office writing up proposals for weeks on end, others are simply exclusivity deals 'if' the writer comes up with an idea in that time. It's not clear what this one is.

Wow, Adam, you really are a believer.

@Brad: the thing people tend to miss when trying to understand the GRRM "hate" phenomenon (and his shadow fandom thing) is that it stems from a genuine love for the first three books. What I'm trying to say is - you have to truly admire the first three for what they are to be able to despise the fifth for what it is not.