The fifth volume in the Chung Kuo series, The Art of War, is out on 1 March. Unlike the previous volumes, I haven't received an ARC so I'll have to pick it up the old-fashioned way at some point. Here is the Larry Rostant cover art for the sixth volume in the series, An Inch of Ashes: 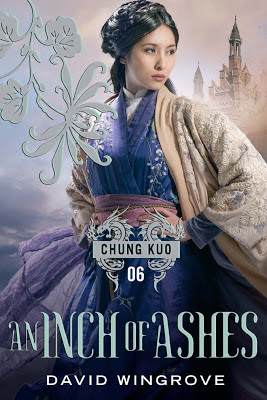 Corvus's new catalogue confirms that there will only be three Chung Kuo novels published this year rather than the previously-suggested four. An Inch of Ashes will be out on 4 July, followed by The Broken Wheel on 7 November. The good news is that apparently Corvus has reached a deal with Barnes and Nobel in the United States, with the UK versions of the novels being released in the USA via their shops. With no news on a US-specific publisher picking up the series, this should be of interest to American readers. The books are also available via Amazon, with the e-editions also accessible from the USA (though not always on release).
Posted by Adam Whitehead at 14:04