Not very far, but Martin confirms that, in the wake of the new deal, he is actively discussing Dunk and Egg with HBO and will be pitching a Tuf Voyaging TV series to them as well (note he doesn't say to HBO, but the recent deal means it really has to be to HBO). He also suggests Conleth Hill (Varys in GoT) could make an excellent Haviland Tuf, and rules himself out from having any role on the new I, Claudius TV series. 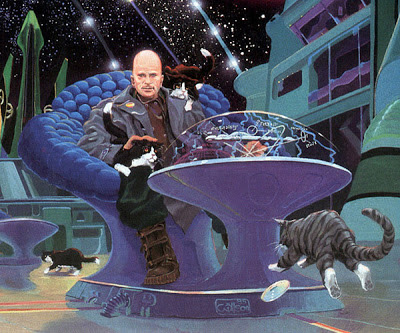 No word on a possibly Ron Donachie-starring version of Fevre Dream, unfortunately. Martin's comments do confirm earlier supposition that the deal will be used - at least in part - to explore his existing, non-optioned franchises.

Update: Martin has confirmed that a movie version of Fevre Dream is in the works, with a 'name' director interested in the project. However, nothing has been signed yet. The Wild Cards franchise is currently being worked on as a movie collaboration between SyFy and Universal, with Melinda Snodgrass having just delivered her first draft of the script.
Posted by Adam Whitehead at 14:08

Yes, Varys would be a great guy for Tuff. Personally I'd rather see Thrones go the distance and maybe some earlier history (such as Dunk and Egg fleshed out a bit more historically). Tuff was okay, but nothing so exciting, at least to me.

Why would anyone want to see Tuf being made into a film or TV series? It is among the worst things GRRM has written and the lead character is an obnoxious, arrogant, pompous ass.

I loved Tuf and would happily watch a TV series. It would adapt very well to that.

So long as it doesn't hold up his writing...