Master and Fool by J.V. Jones

Melliandra, Maybor and Tawl are in hiding in the city of Bren as the mad King Kylock expands his power across the north. As armies march and cities burn, Jack discovers how to control his power and learns that his road leads to the forbidding island of Larn. 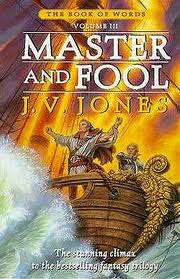 Master and Fool is the final volume of J.V. Jones's Book of Words trilogy. As is traditional with these sort of things, epic climaxes are reached, daring deeds are undertaken and destinies are fulfilled. However, Jones undertakes these actions with unusual cynicism, showing there is a cost to victory and no triumph is unmarred by tragedy.

Jones's writing skills have improved from book to book in this series, with the somewhat jarring tonal shifts of the first volume (from tragedy to black comedy and back again) now smoothed other by more natural transitions. Unlike the second volume, which was prone to time-filling wheel-spinning, this third book is fairly jam-packed with plot development. In fact, it's rather too full and a long and epic journey that fills the middle part of the book whilst events are on hold back in Bren feels a bit implausible. It may have been better for Jones to have restructured this series and allowed this journey to begin in the second volume (sacrificing the more tedious and disposable Jack scenes at the farm if necessary). As it stands, whilst Jack and Tawl are off having an epic adventure we have to endure quite a few unpleasant scenes of Melliandra being tormented in prison, which get redundant quite quickly.

In fact, given Melliandra's character growth in the second volume, it's disappointing to see her relegated to the standard damsel in distress role here, whilst Jack and Tawl get to do the whole traditional hero's journey, male-bonding thing. In fact, given that the trilogy moves away from the standard epic fantasy template several times in its earlier volumes, it's rather disheartening that the author returns so quickly to the genre's standard tropes in the final volume. Even one of the more interesting devices, of using castle guards Bodger and Grift to offer commentary on what's going on around them, is marred by having the two guards join forces with our heroes and become more central characters, which feels like an indulgence. More satisfying by far is Tavalisk's lazy villainy and attempts to manipulate events from afar, which backfire on him most amusingly.

Whilst the ending is problematic - and one character arc is left rather blatantly unresolved for the sort-of sequel series Sword of Shadows to address - there are still positives to take from it. Jones's actual writing and characterisation are reasonable and things are wrapped up satisfyingly without being too neat. The trilogy as a whole is definitely one of the better examples of mid-1990s epic fantasy, even moreso for being an example of the darker direction the genre was headed in regardless of A Game of Thrones (the first two volumes of Book of Words came out before it).

Master and Fool (***½) is a solid - if flawed - conclusion to Jones's opening trilogy, but is only a hint of how much better she gets later on. The novel is available now in the UK and USA.
Posted by Adam Whitehead at 12:08

Email ThisBlogThis!Share to TwitterShare to FacebookShare to Pinterest
Labels: j.v. jones, master and fool, the book of words

I never read the Book of Words trilogy, but I'm about halfway through the Sword of Shadows series and quite enjoying it. Very little in the way of black comedy there - it's a rather bleak tale - but the characters are strong, and there's a nice overall mythology.

What's going on with her anyway? Her website hasn't been updated much in forever and I haven't heard a peep about the next (last?) book.