According to prophecy, mankind will be saved by the Deliverer, a figure who will unite all of humanity during the Daylight War before defeating the forces of demonkind in the First War. The demons that rise from the Core at night will be destroyed and peace restored to the world. But there is a problem: two men have arisen, both named as the Deliverer by the people they have saved. From the north comes Arlen, the Painted Man. From the south comes Jardir, the ruler of Krasia, and his armies of well-trained, fanatical warriors. For humanity to survive to fight the First War, only one of them can live. 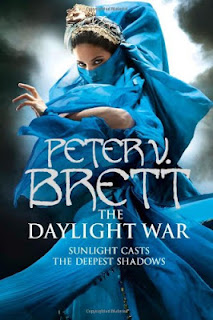 The Daylight War is the third novel of The Demon Cycle, currently planned to run to five volumes. It follows on from the events of the enjoyable The Painted Man and the less-accomplished Desert Spear and replicates the structure of the latter novel. Whilst the current-day storyline continues to unfold, we are treated to lengthy flashbacks to the past to flesh out the background of a key character, in this case Inevera, Jardir's First Wife.

In this case, these flashbacks are not as extensive as The Desert Spear's, which were important to add to our understanding of the character of Jardir (who, as one of the two major protagonists of the series, needed such fleshing-out to better explain his actions at the end of The Painted Man). Inevera, though an important influence on events, is not a character in the same league and as such her flashbacks are more succinct. This leaves more time for the book to address the modern-day storyline, which has effectively been on hold since the end of The Painted Man: The Desert Spear moved the present-day storyline forwards infinitesimally, due to both the flashbacks taking up an immense amount of the book and an apparent decline in Brett's pacing abilities.

Unfortunately, and for reasons that remain unclear, The Daylight War does not do this. An immense amount of the book is taken up by characters sitting around and talking about the plot, about what has happened (and is redundant, as we've already read it) and what might happen next. Then we switch from the rustic faux-Two Rivers/Shirefolk of Team Arlen to the faux-Muslims of Team Jardir and the exact same thing happens again. Then we get a brief scene in which some demons get killed. Then people discuss the plot a bit more in light of these demons being killed. This happens repeatedly for about 650 pages, whilst the reader wonders what is going on. 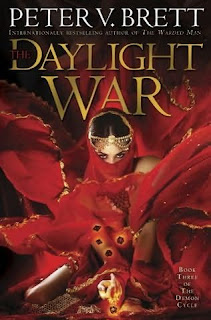 Finally, towards the end of the book, we get a couple of big action set-pieces in which lots of demons get killed, there are a few reversals as some minor characters are killed off, and then a painfully contrived final cliffhanger showdown between Jardir and Arlen that comes almost out of nowhere, and seems to be more the result of a dwindling page count then any natural plot development. The book's title also seems misleading: the Daylight War simply does not happen in the this novel (all of the major battles are against demons, not between the two human societies). The conclusion hints that maybe it does not need to happen, with the winner of the duel walking off with all of humanity united, so the title may be deliberately ironic.

The novel is not a complete disaster, despite its flirtation with Crossroads of Twilight levels of pacing. Brett's prose is fairly basic - and if anything has decreased slightly since the first novel - but remains effective at drawing environments, characters and situations. He is good with actions scenes, and his ward-based magic system is well-envisaged. Like Robert Jordan and Brandon Sanderson, Brett has come up with a system that is flexible and imaginative, and allows for it to be reinterpreted and upgraded as the series continues. There's more than a tinge of Dungeons and Dragons to this approach, with Brett's characters 'levelling up' in magical power to face the increasingly powerful monsters they face, but it remains an effective device. We get more information about demons, including more scenes from the demons' POV, which give us a hint about their society (but not their origins which, given that Brett's world is clearly ours millennia hence, remain puzzling).

The book also improves - though moderately - in its treatment of female characters. Previously Brett drastically over-used rape as a device of dramatic change, with both male and female characters suffering some kind of sexual abuse whenever he needed them to undergo some kind of moment of character realisation. In The Daylight War several of these abusers get their just desserts and the institutionalised rape within the Krasian culture is heavily eroded by Jardir's progressive policies (we also see the rise of a Krasian sect of female warriors). Unfortunately this has been replaced by a willingness by the female characters to simply use their bodies as a means to get whatever they want, replacing rape with consensual prostitution. At any rate, though Brett seems aware of the previous books' dubious gender politics and moved to address them, there remains some serious issues in this area which makes for some uncomfortable reading.

The Daylight War (**½) is an extremely badly-paced novel that features a tremendous amount of filler and redundant recapping of the plot. Intermittently, we get good moments of characterisation and a fair few decent action beats, along with some imaginative development of the magic system and the basic premise of the series, which remains interesting. But the book's main storyline crawls forwards at a snail's pace (ending in a contrived cliffhanger) and its treatment of female characters and sexuality remains painfully clumsy, despite minor improvements. The novel is available now in the UK and USA.
Posted by Adam Whitehead at 14:04

Hmm, I seem to have liked it quite a bit better than you, but I can't argue with the pacing, or that awkward cliffhanger showdown. What should have been the centrepiece of novel was, instead, a "holy crap, we're almost out of space and they haven't even met!" contrivance, but that was one heck of a cliffhanger.

In terms of gender/sexism, I do wonder what the heck happened to Leesha (a mood swing should not be a character arc), but I quite liked Inevera's backstory, and thought Rojer's wives played an important role.

Thanks for the review Adam.You saved me from reading this,man,i had such high hopes when the 1st book in this series came out.

By the way,any recent epic fantasy debuts that you recommend ?

I did like Rojer's story quite a bit, though his sudden understanding and mastery of the music magic seemed to have come out of nowhere.

In the end, I have to reserve judgement on this book until the series is complete. Middle books can be justified if the series as a whole is worthwhile. I'm not happy with this, but there it is.

Well to be honest I am not surprised, book one wasn't all that it was hyped to be and these developments could be seen coming for years. Good thing I quit after volume 1 and been proven right in my expectations.

Does seem the sort of series that's captured imaginations enough that, like Jordan, even with flaws it'll sell huge numbers and continue to be successful. Having only read the first I'm not drawing a direct comparison there, but inferring from reviews like this one. However many flaws people still enjoy reading it - certainly that's how I felt plodding happily through Dance with Dragons!

A DANCE WITH DRAGONS is a vastly more successful novel than THE DAYLIGHT WAR, although it's still not as good as the first three in the series. ADWD's biggest issue is the clack of the climax the book is building up to (the three big battles), followed by unsatisfying forward plot movement in Dany's story arc.

Outside of that area, you have much more success. GRRM even managed to execute some story arcs with surprising conciseness (in the case of Jon Connington, Davos and Bran), whilst even Jon's storyline got a satisfying through-line and ending (if equally cliffhangery, and probably taking 2-3 too many chapters). Most notably, ADWD had Theon's storyline, which is simply up there as one of the best achievements in the entire series.

THE DAYLIGHT WAR simply does not compare on any level, IMO.

Is the real problem that publishers want authors to go for multipart stories when in reality a grounding in stand alone books would offer them a better way forward.

I'm currently listening to the audiobook of this and having to listen to someone else read out the sex scenes is, frankly, embarrassing! His 'spear' etc. :-)