WITCHER 3 announced, will be final game in the series

CDProjekt have confirmed that The Witcher 3: Wild Hunt is in development and will be released in 2014. In a major break from the structure of the first two games, The Witcher 3 will be an open-world game similar to Bethesda's Elder Scrolls game (with Skyrim name-checked several times). The game world will be 30 times the size of The Witcher 2's, and about 20% larger than the setting of Skyrim and Oblivion. 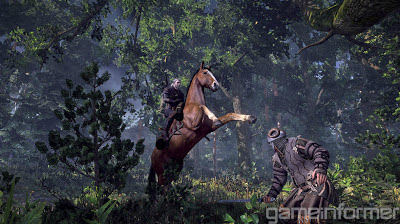 Confirmed: The Witcher 3 will have beards, horses and trees.


CDProjekt have also confirmed that this will be the last game set in The Witcher universe. The games are based on Andrzej Sapkowski's novels, though they are not considered canon (as Sapkowski rather brusquely confirmed a few weeks ago) for the future books in the world that Sapkowski is planning. CDProjekt are also working on an RPG based on the Cyberpunk pen-and-paper system, with their first game in the setting, Cyberpunk 2077, expected to be released in 2015.

The Witcher 3 will be released in 2014 on PC and (almost certainly) next-generation consoles.
Posted by Adam Whitehead at 13:48

The CDPR CEO said in a Polish interview it's the final game of the Geralt storyline, but not the end of the franchise.
Bring on the Roche saga I say!

I hope the large world is only a natural development out of the earlier games, which also strove towards a relatively seamless feel or made open world claims beforehand, and not a snapshot idea out of the Skyrim hightime, which might be suggested by the similar style of the helmet and the grey-in-grey artwork (as in gameplay in Skyrim). But these are just obligatory remarks, it´ll be a great one of its kind in any case...

Last game in the series? Why? It's the only hit CDProjekt has and they can canning it? That makes no sense

they're expanding... they have Cyberpunk 2077 for one, and I think another secret project. there are always new possibilities for a setting. And stories with endings make sense in and of themselves. See it as the way to make the game best. like a feature or "idea".

It's possible CDProjekt only had a three-game contract. They may want to move on to CYBERPUNK and perhaps an original IP as well (as the studio is now large enough to support two teams at once).

They may also have been gotten irritated at Sapkowski apparently bad-mouthing the games recently (though he did kind of backtrack immediately, but he definitely did not sound approving of them).

Sapkowski didn't bad-mouth the games, all he said was that the games story is not canon. He said that his books are the canon story of The Witcher, not the games. Which I think is fair enough as he is the creator of The Witcher.
As for Cyberpunk and the new IP, neither of them are finish yet. They are untested properties that had no track record of success so I'm shock that CDProjekt is dumping The Witcher for 2 untested, untried IP. Very dangerous.

CYBERPUNK is based on an extremely successful, long-running (longer than THE WITCHER books) roleplaying game. In the USA and UK, it's a far-better-known property than THE WITCHER, by far (though not in the rest of Europe), or at least it was before the WITCHER games came out.

More to the point, CDProjekt, like Valve, are able to take risks because they get a substantial income from their online business (they run the GoG game-selling site).