The Baker's Boy by J.V. Jones

Conspiracies and treachery run deep at Castle Harvell. King Lesketh is dying of an illness, the Four Kingdoms are at war with the neighbouring land of Halcus and Chancellor Baralis is intriguing with the Knights of Valdis and the Duke of Bren. The other major powers of the continent, sensing a coming clash of nations, are arming for war. But such things are flying high over the head of Jack, a simple baker's apprentice who just wants to get on with his life. When Jack manifests powers that mark him as a sorcerer, he earns the enmity of Baralis. Fleeing into the wilderness along with Lady Melliandra, who is trying to escape a marriage to the sinister Prince Kylock, Jack has to come to grips with his powers and discover his role in the unfolding events. 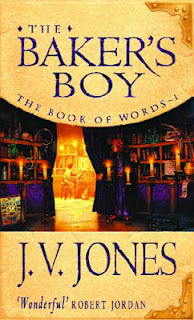 The Baker's Boy, originally published in 1995, is the debut novel by British fantasy author J.V. Jones and the opening volume of the Book of Words trilogy (itself the opening three volumes of a longer fantasy epic continued in her current Sword of Shadows sequence). As a glance at the plot summary will reveal, we are deep in the heart of Traditional Fantasy Territory here. There's a young boy destined for great things. There's evil sorcerers conniving to bring about dark ends. There's cruel and unworthy heirs to thrones, and beautiful ladies trying to escape from pre-arranged fates. It's all very traditional.

Traditional does not necessarily mean bad, and Jones laces her story with some darker and more interesting elements. The book is fairly 'low fantasy' in nature, dwelling on conspiracies, murders and assassinations. Characters such as Baralis are ruthless and merciless, but do not see themselves that way and are presented as the hero of their own story. Blurring the moral boundaries nicely, Jones sets up the greatest threats to Baralis as coming from Tavalisk, Archbishop of the distant city of Rorn, who himself is a venal, vain, arrogant and cruel man, little better than Baralis; and Maybor, Baralis's rival at court and the father of Melliandra, who is also presented as a violent and unpleasant man. The fact that these three characters are as bad as one another makes it hard to root for any side, although Jones gives a more sympathetic portrait of the three characters caught up in the three connivers' webs: Jack, Melliandra and Tawl, a knight who is searching for a young boy whose coming is foretold in prophecy (yes, one of those). There is also a tremendously satisfying vein of black humour running through the book, such as Tavalisk's wry observations of events being accompanied by a battle of wits with his much put-upon manservant. 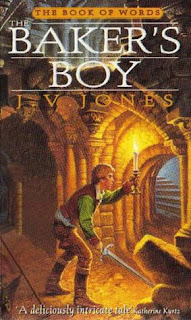 Whilst Jones mixes the traditional fantasy ingredients up a little, and the book is always readable, regular genre readers will find little here that has not been done before, and better. As a first novel, The Baker's Boy is certainly very rough in places. Where the book gains some additional value is that Jones later went on to write The Sword of Shadows, a fantasy epic that is categorically superior to almost everything else in the genre (certainly it's batting at the same level as A Song of Ice and Fire, the Malazan series and the works of Guy Gavriel Kay). Whilst The Book of Words is nowhere near as good, though there is an escalation in quality from book to book that is impressive to watch, it's certainly worth a look as some characters that re-occur in the later Sword of Shadows do first appear here, and knowing their backstory has some worth for the later books.

The Baker's Boy (***) is as traditional a start to a fantasy series as there has ever been, though it remains resolutely entertaining. There are some rough spots as Jones comes up to speed but there's a rich vein of dark humour, some solid characterisation and an ending that was rather startling and refreshingly bleak in those altogether more cliched times when the book first came out. The novel is available now in the UK and USA.
Posted by Adam Whitehead at 15:09

Email ThisBlogThis!Share to TwitterShare to FacebookShare to Pinterest
Labels: j.v. jones, the baker's boy, the book of words

I have fond memories of reading that book in its German translation back in the late 90s. Read all three volumes of the "Book of Words" back to back. Very, very readable indeed and compared to some other stufff that was published at the time quite ruthless in places. A pity that she all but disappeared from the German book market. She was a rising star in the 90s, but never quite had her big break. Olaf

Jones does get better,and I particularly liked the Sword of Shadows for its somewhat non traditional landscape.

The BOOK OF WORDS was a monster debut hit back in the day. All three books hit the New York Times bestseller list straight off the bat and she shifted a lot of books in the UK and USA. Whether that was the Robert Jordan cover blurb effect or just pure chance, but it was a huge series.

THE BARBED COIL and the first SWORD OF SHADOWS book also did very well. Jones actually released five large (500-700 page) novels in just five years, which kept her in the public eye. Unfortunately, she's taken fourteen years to bring out another three books and been in almost complete radio silence over the fifth SWORD OF SHADOWS book for the past 2-3 years, which has likely damaged her profile.

Agreed, her slow writing hasn't helped her career any.

I also expected her to become even more popular with the Sword of Shadow series, which had an excellent start, at least IMO. But as you already noted, some 3-5 years between her last books has damaged her profile. She doesn't have the G.R.R. Martin or Robert Jordan level of popularity to get away with that.

What makes me sad is that the quality of the Sword of Shadow series also went downhill. Maybe I was just out of touch, but I found the latest two books worse than the great first books.

This just made me think of Scott Lynch. I really got into the Locke Lamora stuff in Red Seas or was it Red Skies, I am waiting for "Republic of Thieves" for so long already... smells of an upcoming disappointment, unfortunately! :(

I don't mind to wait longer for a good book, but she really needs to get an understanding for the obligation to keep fans informed in the age of FB, Twitter, blogs and whatever. It doesn't take more than five minutes to post something like, "yeah folks, I'm writing, but I hit a giant snare of Meereenese Knots and the book won't be out in 2013, sorry." The radio silence sort of makes me lose interest in the whole thing since I don't even know if she's still working on the series.

JVJ used to update her blog fairly regularly and was on twitter a bit but that all stopped at the start of 2011.

The British press didn't/doesn't help- the Watcher of the Dead didn't get reviewed in SFX but they found plenty of room for Star Trek, Star Wars & Doctor Who licensed titles :/

Shame there's not even a tentative release date on Amazon for book 5.