Following up their comments a few weeks ago, Obsidian have confirmed that they have pitched a new Star Wars roleplaying game to LucasArts. The new game won't actually be Knights of the Old Republic III, as it will be set between Revenge of the Sith and A New Hope. Obsidian's top writer, Chris Avellone, has developed and written the story. Obsidian are waiting to hear back from LucasArts and their new owner, Disney (who have made discouraging noises about not wanting to focus on big gaming projects any more) about their pitch. 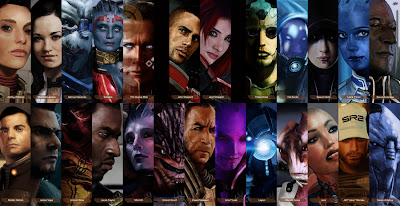 Don't expect to be seeing many - or any - of these guys in the new Mass Effect.

Meanwhile, BioWare have made a lot of confusing comments about Mass Effect 4. The only thing they have seemingly confirmed is that it will not be called Mass Effect 4. In a bizarre twist one of the developers has said that "the game does not have to come after. Or before. Or off to the side. Or with characters you know." Actually, logically it kind of does, unless it's set in a completely different universe (and hence wouldn't be a Mass Effect title). Good to see that BioWare still can't make a single announcement about the Mass Effect franchise without turning into a confusing mess. However, it does confirm that Mass Effect 4: Whatever is now in active development.

that is to be expected because a lot of them die in the mass effect series and we don't know if what time period me4 is set in and if Shepard defeated the reapers and survived or not for all we know it could be a 100 years later and all of the characters except for maybe Liara, Morith, Samara, and Aria me4 might e a lot of fun you and i don't know until a release date is posted have a wonderful day