Originally airing from 1988 to 1989, the second season of Star Trek: The Next Generation was beset by challenges. A writer's strike crippled Hollywood between seasons and the show was almost cancelled as a result. The producers were able to get around the problem by re-tasking scripts from the aborted Star Trek: Phase II TV show from the 1970s, reducing the season order by four episodes and - in a fit of true desperation - dropping a clip show (the terrifyingly awful Shades of Grey, widely-acknowledged as the worst episode of the entire franchise) into the mix. They scraped through to produce a season that is a notable improvement over the first year, and definitely better than it has any right to be given the situation it was produced under. 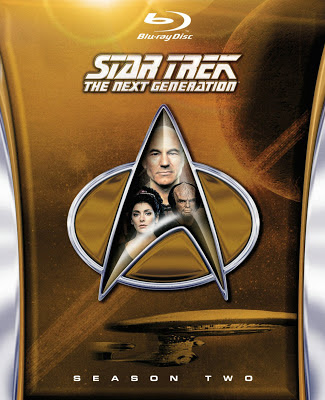 As with the first season, things get off to a bumpy start but improve later on. Fortunately, they improve a lot faster. The first two episodes, The Child (Troi gets pregnant with a rapidly-evolving alien thingamajig) and Where Silence Has Lease (the Enterprise gets stuck in a void in space where an alien superintelligence messes around with them just because that's how it rolls), are pretty bad but there is a quantum leap in improvement when Elementary, Dear Data comes on. Excellent performances and a strong script alleviate the somewhat ropey rules the show is establishing regarding the holodeck. Weaker episodes continue to roll in - The Outrageous Okona (slightly tepid conman comes on board), The Dauphin (Wesley Crusher romance episode...NO!), The Royale (crew encounter weird hotel IN SPACE) and Up the Long Ladder (outrageous Irish stereotyping) should all be burned - but there's also a better sense of the characters getting their own voices and characterisation becoming more consistent.

More to the point, the season gives us a larger number of very good episodes compared to the first. A Matter of Honour is terrific fun, establishing Riker as the first officer of a Kling Bird of Prey during an officer exchange programme. Jonathan Frakes - whose acting powers have now been radically enhanced by The Beard - steps up his game a lot. Contagion is a very dumb episode about computer viruses, but as an action romp it's very entertaining (similar to The Arsenal of Freedom in Season 1, but better). Peak Performance from later in the season is in a similar vein. Time Squared is a creepy episode about time loops and features some disturbing ideas and a doom-laden atmosphere, though some questionable writing for Picard prevents it from fulfilling its full promise. The Emissary is an important episode for Worf and the progression of his character arc and is very solid.

More impressively, this season gives us the first two hands-down, no-questions, absolute 'classic' episodes of Star Trek: The Next Generation. First up is The Measure of a Man, written by Melinda Snodgrass (best-known as the co-editor of the Wild Cards superhero books series). The episode is an examination of whether Data is a sentient being or not, and features some terrific acting from Patrick Stewart, Brent Spiner and Jonathan Frakes. It's a morality play, the sort of thing that Trek can make tedious if it mishandles it, but here the team do an exemplary job of exploring the issues and turning them into a riveting hour of television (and it is an hour, as the Blu-Ray set features the hitherto-unseen 60-minute cut of the episode before it was trimmed down to the normal 44 minutes). 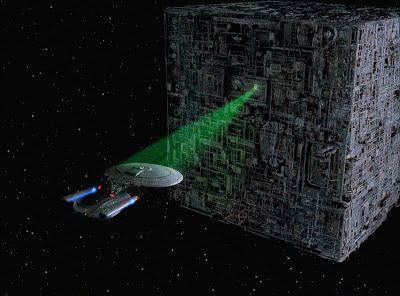 Even more impressive is Q Who? This episode is notable for introducing the Borg, but it's also a masterclass in pacing, music (the score is incredibly ominous), exposition without getting leaden (the hints to the past antagonism between Guinan and Q are played just right), tension, action and a genuinely surprising ending: arguably the only time on ST:TNG that the crew 'lose' the struggle of the episode and only barely survive. It's also the one and only time that Q is effectively used as a dramatically intense character. His other appearances either misfire or are played for comedy. Here we see John De Lancie at his absolute best, particularly in the scene where he pitifully tells Picard what is happening is no illusion after eighteen Enterprise crewmembers are killed by the Borg. The climactic scene where Picard begs Q to save them before they are all slaughtered is handled pitch-perfectly by Patrick Stewart (who was genuinely troubled by the episode's message that the Enterprise crew can't win all the time) as well.

Whilst Season 2 will never be remembered as the best season of the show, it does feature two of its finest hours and a whole host of other, very solid episodes. The cast turn in excellent performances, particularly Diana Muldaur as Dr. Pulaski in her only season on the show (replacing Gates McFadden as Dr. Crusher, who was sacked for criticising the show's sexist scripts in the first season; internal and fan pressure resulted in her reinstatement for Season 3). It's a shame we didn't get to see Pulaski again, as the evolution of her character arc and the development of her relationships with Worf and Data were very well-handled over the course of the season.

As with the first season, the restoration job has done a pretty good job. However, a different team was used for the second season and there is the sense that a few corners were cut. The redone effects aren't quite as well-handled as in the first season (particularly noticeable in Q Who?, though the original version of the episode had a few iffy effects issues as well, so perhaps it was unsalvageable) and the new team have only cleaned up the planets that the Enterprise orbits, rather than replacing them with fully-convincing 3D spheres. Whilst the improvements are still light-years beyond what people might be expecting, they're not quite as jaw-dropping as the job that was done on Season 1. This is made up for a bit by the other extras, which are impressive. The highlight is a lengthy roundtable discussion between the entire cast about the show and what it meant for their careers and legacies, although the ongoing 'history of the series' documentary is also excellent. The original DVD extras are also included, though again only in standard definition.

The second season of Star Trek: The Next Generation (****) sees the show improving by leaps and bounds over the weaker first year. It is available now on Blu-Ray in the UK and USA. The third season - often regarded as the show's finest season - will be released in April.
Posted by Adam Whitehead at 17:12

Glad you acknowledged Pulaski's influence. Didn't know that McFadden was replaced for that reason, though.

The Royale is one of my favorite episodes. It's like TNG does Twilight Zone.

Wow, it's amazing that the rose-tinted glasses of nostalgia can accomplish. Looking back, it seems like Pulaski came in far later than season two, and I can hardly believe the Borg came along to early, much less out of such a difficult season.