It is the tenth year of the Cylon War. The Colonial Fleet is gradually being worn down by their former slaves turned enemies, the Cylons. Bill Adama, a newly-graduated pilot assigned to the battlestar Galactica, takes part in what should be a simple escort mission but turns into a major operation which could have important ramifications for the entire war. 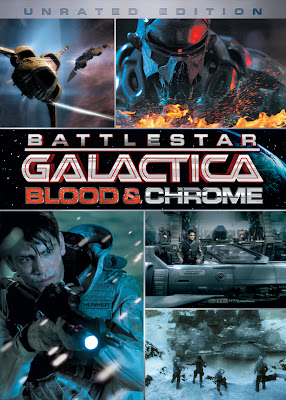 Blood and Chrome started life as a proposed full spin-off series of the new(er) Battlestar Galactica. The first spin-off, Caprica, had been a failure and was cancelled after one season. Popular opinion has it that the show was too talky, too cerebral and simply too dull, having moved away from the dogfights and political infighting that made the original series so compelling. For this second spin-off, the proposal was to make a balls-to-the-wall action show, a Top Gun in space with Vipers and Cylons. Setting the show during the First Cylon War would also allow the show to resolve some storylines from Caprica - which took place about sixteen years earlier - and foreshadow some of the events of BSG itself (which starts about forty-two years later).

In the event, it never happened. Blood and Chrome - the proposed pilot episode of the spin-off - was not picked up and, unless the imminent DVD/Blu-Ray release sells like gangbusters, will not be in the future. As it stands, it is left behind as a curiosity and, it has to be said, not a particularly compelling one.

Blood and Chrome was not filmed in the traditional manner. With the existing (massive and expensive-to-maintain) Galactica sets all destroyed at the end of filming, the producers were forced to rely on greenscreens and digital scans to reproduce the original sets. In fact, they were able to adjust the sets to reflect the fact that it's forty years earlier, with less-advanced technology available. The same 'bones' of the original structures are there, but the detailing is different. This works quite well, giving the sense that this is the same ship at a different point in its lifespan. The quality of the greenscreen sets is rather variable, with most of them falling into the 'somewhat fake but you don't notice after a while' category. Some of them are pretty good: the CIC set is surprisingly well-done, though the fact that it's quite a dark set helps. On the other hand, scenes on the ice planet and inside the abandoned facility there are blatantly fake. There's also rather too much lens flare going on in the CGI scenes, which gets distracting after a while.

Other CGI is reasonable, though the decision was made to use very fast cuts. This meant both an insane number of CGI shots (this 120-minute TV movie has more than 1,800 shots, compared to 1,488 for the three-and-a-half hour cinematic film The Return of the King) and almost no time to appreciate them. Whilst the original show was guilty of fast-paced cutting at times which made it difficult to follow what was going on, Blood and Chrome takes this to a new level. The confrontation between the Colonial heavy cruiser Osiris and a Cylon basestar should be a tense, epic moment, but instead turns into a confusing melee of badly-cut CGI shots and explosions. Given that Blood and Chrome has resources available to it that Ronald Moore and his team would have killed to have on the original BSG pilot a decade ago, it's a shame to see them wasted in such a fashion.

That leaves the writing and acting to back up the effects and, unfortunately, neither are very accomplished. There's some attempts at characterisation which should be a lot stronger than it is, since the show really only has to focus on Adama, his co-pilot Coker and their civilian passenger Becca for most of its length. Instead it's all a bit half-hearted and actors Luke Pasqualino, Ben Cotton and Lili Bordan seem uninspired by the material, which is cliched and trite. A few attempts to lampshade the macho pilot genre of action films and series fall flat (as the show immediately employs many of those tropes with no sense of irony or intelligence). Later in the movie there is an attempt to discuss the rights and wrongs of the war and its immense bodycount, but it's all rather tepid compared to the issues that the original BSG raised on a regular basis. There's also a cameo appearance by a BSG regular which helps place the TV movie a bit better in the timeline, but even this misfires as it causes confusion with the flashback scenes in the BSG TV movie Razor, which supposedly happens two years after Blood and Chrome.

What we are left with, then, is a confusing morass of explosions, a ton of CGI (some impressive, most not), some cliched writing and indifferent performances, with occasional bursts of effort. What Blood and Chrome does prove, conclusively, is that BSG is at its heart about compelling characters, ethical conflicts and difficult-to-answer questions. Removing the ambiguity in favour of explosions and space dogfights clearly does not work. However, given that in a few years (when technology has improved a bit more) a lot more shows may be made this way, it's certainly worth watching as a hint of the future of TV production.

Eh, I quite liked it. Anything without Baltar in it was a joy to watch. :)