A failed assassination attempt on the Dragonborn hints that an ancient evil has returned to the island of Solstheim, located off the north-eastern coast of Skyrim and north of Morrowind's foreboding Red Mountain. The Dragonborn sets sail for the island and is confronted by a mystery that will take them across the island and into the Oblivion realm of Apocrypha to confront Miraak, the first Dragonborn. 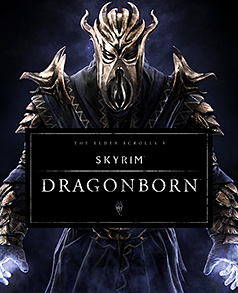 Dragonborn is the third piece of DLC (downloadable content) for Skyrim, the monstrously successful fifth game in The Elder Scrolls. Unlike Hearthfire, which simply added the ability to build houses to the game, and Dawnguard, which was a short, linear quest adding the ability to transform into a vampire lord, Dragonborn is a proper expansion like we used to get in the good old days. The setting is Solstheim, previously the setting for Bloodmoon, an expansion to The Elder Scrolls III: Morrowind. The island has changed a lot in the subsequent 200 years, with the eruption of the Red Mountain covering much of the southern half of the island in ash. However, the central mountains and the north coast retain that mountainous, sub-arctic feel that Skyrim evoked so successfully.

Dragonborn starts when your character - the Dragonborn - is attacked whilst going about his or her daily business (the Dragonborn questline only starts once you have completed a few of the main storyline quests in Skyrim itself and been proclaimed Dragonborn). Clues on the attackers lead you to a boat moored in Windhelm. The captain - reluctantly - agrees to sail you to Solstheim. Upon arrival in the main settlement at Raven Rock, you are confronted by houses built out of the shells of long-dead giant crustaceans and a wizard living inside a gargantuan mushroom. You are not in Skyrim any more.

The dominant race in the southern half of the island are the dunmer or dark elves, who were allowed to settle on Solstheim by the Nord High King after being driven out of their homeland. After 200 years living together with the Nords and other races, a tolerant multi-racial community has grown up that is a pleasant change after the prejudices of Skyrim proper (where the Nords treat any non-Nord characters with disdain, if not outright hostility). The smaller size of Solstheim - a fraction the size of Skyrim but still big enough to contain dozens of main quests, side-quests and missions, as well as dozens of locations and vast quantities of loot - also allows for a more focused game without sacrificing the freedom the series is renowned for.

As is traditional with the gameplay of the series, you can completely ignore the main storyline in favour of the side-quests. I actually did this for about eight or nine hours, simply traipsing around the island pursuing optional missions or just exploring and checking out locations I'd discovered. Dragonborn does a good job of adjusting to where you are in the main game's quests: being a member of the Thieves' Guild immediately gave me an 'in' to the town, with the local blacksmith being related to one of the senior guild members. A bunch of hunters living up in the mountains have a quest that will only be activated if the player is a werewolf. There are different dialogue options depending on if you play the expansion before or after the defeat of Alduin in the main game's storyline. In particular, Dragonborn improves upon Skyrim by making its NPCs more memorable and interesting than that in the main game. The aforementioned mushroom-dwelling wizard is a total nutjob, with some very amusing lines, whilst it's possible for the player to win the allegiance of a tribe of Rieklings (think of a race of demented Ewok-goblins) who will then follow the player around and randomly help out in combat. 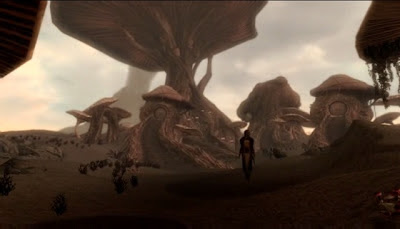 As well as Solstheim itself, the game features sequences set in Apocrypha, the home of the daedric prince Hermaeus Mora. This is an alternate dimension made up of stacks of billions of books, guarded by psychotic librarians known as Seekers (Cthulu-like tentacled horrors). Traversing these chunks of Apocrypha - accessed by the foreboding Black Books - rewards the player with different powers and effects, and is required to find and defeat Miraak. Unlike the repetitive Oblivion Gate towers in Oblivion, these sojourns to Apocrypha are shorter, more concise and more imaginative. You also only need to do a couple of them to finish the expansion's storyline, at which point finding more of them becomes purely optional.

On the negative side of things, Miraak is a dull enemy and the expansion's biggest selling-point, being able to ride around on dragonback, is severely underwhelming. There's also perhaps an over-relianced on draugr (undead) as enemies in the new dungeons, when they'd already become quite played out in Skyrim itself. Fortunately, these make for surprisingly tiny parts of the expansion and it gets just about everything else right, breathing fresh life back into a game that was starting to feel a little stale.

Overall, Dragonborn (****) makes for a very welcome return to the world of Skyrim. The changes to the game's visual style are refreshing, and there's some better writing and characterisation than in its parent game. The expansion takes that everything that worked well in Skyrim and packages it into a smaller, more focused and more concise (though, at well over 30 hours worth of content, in no way tiny) gaming experience. Recommended to all fans of Skyrim, especially those underwhelmed by Dawnguard and Hearthfire. The game is available via Steam for PC owners, PSN for PS3 owners and X-Box Live for X-Box 360 owners.
Posted by Adam Whitehead at 13:51

I really loved this expansion and thought it was way better than Dawnguard. I totally agree your complaint about the Draugr. I always feel like the beastiary of Skyrim needs to expand a little more because a lot of the enemies do get really repetitive. Apocrypha was pretty sweet though and it was even kind of creepy at times... I know you jumped and looked around when you first heard those tentacles whirling about;) Great review!