A group of cats are enjoying living in the wilds. One of them falls into a tunnel leading into an underground city of robots and amenities, but no people. Assisted by a friendly drone, B-12, the little cat must find their way out of the city, uncovering and solving the mystery of the city's origin in the process. 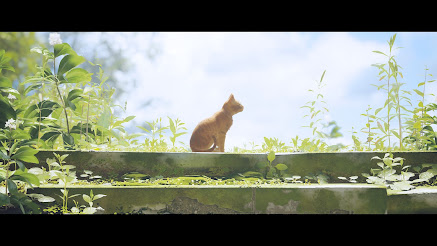 Stray is a third-person action/adventure game with a twist: you play a cat. Not a robot cat or cybercat or cat-like alien, but an actual cat. Perhaps a somewhat more intelligent cat than most, but still a feline. Playing as a cat immediately changes the dynamics of how you interact with the environment: you can go into places far too small for a human, you can jump impressive distances and almost never miss or fall and you have excellent night vision. However, there are also limitations: you can only carry small objects in your mouth, you can't understand anything anyone says to you and you are too small to be effective in combat against most enemies.

As the game progresses, some of these weaknesses are overcome: the B-12 drone and its nano-manipulation system allows you to deconstruct larger objects and store them a harness, whilst B-12 also provides handy robot-to-cat translations. The designers cleverly avoid using B-12 as too much of a crutch. At one point B-12 gains the ability to destroy Zurks (small parasitic creatures who are the main enemy in the early going of the game) but this is time-limited and eventually runs out, leaving your feline hero to their impressive speed and dodging skills instead (hint: this is a game where "going serpentine" is almost always a good idea). 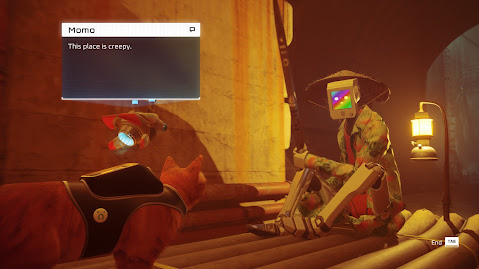 The environments are fantastic in design and filled with hidden nooks and crannies where you can jump, crawl and explore. The linear levels are broken up by several hub areas, where you can explore more widely, meet other characters and engage in a number of side-missions. You can also find hidden achievements, and even unlock extra parts of the soundtrack (by finding hidden music sheets for a frustrated robot guitarist).

Later on, when you encounter more hostile robots with ranged weapons, the game turns into a stealth title, with you having to avoid enemy vision cones and hide in cardboard boxes (a la Metal Gear Solid) to avoid being detected (alas, you can't move the boxes around). 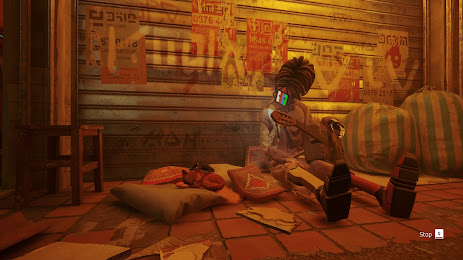 Along the way you can knock things off shelves, miaow a lot, sit and look vaguely puzzled, curl up and go to sleep, drink water from ill-advised sources, rub robots' ankles to make them coo at you and generally engage in a lot of standard cat behaviour. The animation of procatonist is outstanding and worthy of applause. The only missing bit of cat behaviour is food: your cat never gets hungry or eats something they just found lying in the dirt, which is the only unrealistic part of the game.

Stray isn't a long game - I finished it in about seven and a half hours - but 100%ing the game is a much tougher proposition, requiring you to speed-run the entire game as well as finding every fiendishly hidden bonus objective. Luckily the budget price reflects the game's modest length. 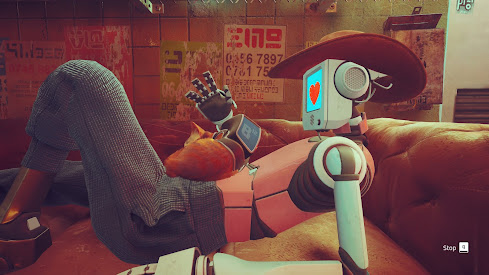 Stray (****) is a pleasantly enjoyable video game which does exactly what it promises: it allows you to play a game as a cat, and have a good time doing so. It is available now on PC, PlayStation 4 and PlayStation 5.

Thank you for reading The Wertzone. To help me provide better content, please consider contributing to my Patreon page and other funding methods.
Posted by Adam Whitehead at 10:51