WHEEL OF TIME formally renewed for a third season

Amazon have renewed their Wheel of Time TV series for a third season. The announcement came during a panel at the San Diego Comic-Con. It had previously leaked that the show had been renewed for a third season in February and was under a consideration for a fourth, but Amazon rowed back on those rumours at the time. 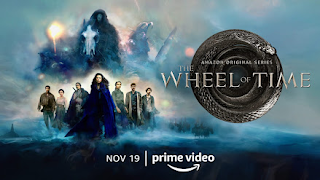 The Wheel of Time aired its first season in November 2021, almost immediately becoming the single most-watched season of original programming in Amazon's history. The first season of Reacher and the third season of The Boys subsequently have notched past that, demonstrating Amazon's consistent growth in market share whilst their main rival, Netflix, has begun contracting. After a mixed start, the full season attracted reasonable critical acclaim, being certified fresh on Rotten Tomatoes, despite grumbling from part of the book fanbase for its deviations from the source material (as well as a final pair of episodes somewhat hamstrung by being produced during the COVID-19 pandemic, including a castmember unexpectedly leaving).

Season 2 had been greenlit whilst Season 1 was still in production, allowing production to continue from Season 1 into Season 2 without too much of a delay. The same may now be true of Season 3, with this renewal allowing work to get underway on the season quite soon and before Season 2 airs.

The airdate for Season 2 remains unconfirmed. With Season 2 wrapping exactly a year after Season 1, it's possible that the show will likewise air a year after the first season, in November this year. However Amazon has several issues with more post-production requirements for Season 2 (the COVID delays ironically allowed post-production on Season 1 to start much earlier in the process), another completed fantasy season waiting for a slot to air in (the second season of Victoriana steampunk show Carnival Row) and possibly not wanting to air The Wheel of Time so close to its flagship medieval fantasy show for the year, The Rings of Power, which will air its first season from 2 September through 14 October. These issues may make a January/February 2023 airdate for Wheel more likely.

Showrunner Rafe Judkins also hints at the content of Seasons 2 and 3. Whilst Season 1 adapted the first novel in the book series, Season 2 will reportedly draw on elements of Books 2 and 3. Judkins notes that Season 3 will cover material from the fourth volume, The Shadow Rising, his favourite book in the series. However, with the planned eight season run of the show requiring to compress fourteen books, it might be that Season 3 also covers material from the fifth book in the series and maybe later as well.