News has sadly broken that Star Trek actress Nichelle Nichols has passed away at the age of 89. 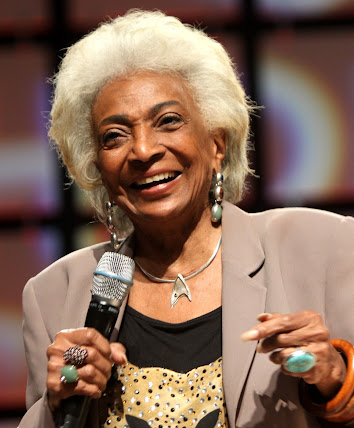 Nichols was born in Robbins, Illinois, a suburb of Chicago, in 1932. Nichols' father was a factory worker who was elected mayor of Robbins in 1929. Nichols became interested in acting at school and studied in New York City and Los Angeles, as well as at the Chicago Ballet Academy.

After a number of lower-profile stage roles, her big break came in appearing in Kicks and Co. on stage in 1961. Although the play closed early, Nichols attracted positive notices and also began a side-career in modelling. She continued acting on stage, attracting higher-profile roles in Carmen Jones in Chicago and Porgy and Bess in New York. Her acting in musicals also opened an occasional career in music, singing with the Lionel Hampton and Duke Ellington bands and later recording two albums.

On screen, she appeared in the 1959 film version of Porgy and Bess as an uncredited dancer, but achieved a breakthrough in Hollywood in 1966, appearing in the films Tarzan's Deadly Silence, Made in Paris and Mister Buddwing. Her first television role came in 1964 in The Lieutenant, playing Norma Bartlett in the episode To Set It Right (alongside Dennis Hopper). Nichols' performance impressed producer Gene Roddenberry, who held her in mind for a science fiction television series he was developing.

In 1966 Nichols was cast as Lieutenant Uhura, the communications officer of the starship Enterprise in Roddenberry's Star Trek. Nichols' role as a prominent African-American woman in a position of some authority on a starship was unprecedented and Nichols attracted significant fan mail, particularly from young black women who saw her as a role model. Despite the attention and profile, Nichols quickly realised that she was not likely to be the star of many episodes, as the focus shifted from an ensemble piece to a tight focus on the triumvirate of William Shatner, Leonard Nimoy and DeForest Kelley as Kirk, Spock and McCoy. Due to her low number of lines, Nichols considered leaving the show after the first season to resume her career on Broadway and even handed her resignation in to Gene Roddenberry. Roddenberry urged her to take the weekend to reconsider. At a charity event over the weekend, Nichols met Dr. Martin Luther King who told her he was an enormous fan and her work was inspiring to himself and to the Civil Rights Movement. He also told her she was hugely inspiring to the next generation of young children, particularly black girls, who otherwise had very few role models on television. Nichols agreed to stay.

Despite nearly losing her from the show, Roddenberry rarely gave Nichols a starring role in episodes. He did, however, cause enormous controversy by producing an episode in which Uhura and Kirk kiss, Plato's Stepchildren. Apparently the nervous director suggested they film a "backup" version of the scene without the kiss. However, Shatner and Nichols both purposefully screwed up the other takes, leaving the scene with the kiss as the only usable take. This is sometimes - inaccurately - portrayed as the first interracial kiss on American television, although it was publicised as such at the time and caused a certain amount of attention. In her autobiography, Nichols noted that she was romantically involved with Roddenberry following their meeting on The Lieutenant, although the relationship was over by the time she was working on Star Trek. She remained friends with Roddenberry and his later wife Majel Barrett, and sang at his funeral in 1991.

Following the cancellation of Star Trek in 1969, Nichols agreed to return to voice her character in Star Trek: The Animated Series. In one episode Uhura took command of the Enterprise, whilst she played a more prominent role in several episodes compared to the live-action show.

Nichols began to work closely with NASA, with a view to inspiring women and minority recruits to sign up to work with the organisation. The program was highly successful and credited with recruiting Dr. Sally Ride, the first American female astronaut, and Colonel Guion Bluford, the first African-American astronaut. As part of her NASA work, Nichols was invited as a special guest in 1976 to watch both the Viking 1 landing on Mars and the first flight of the American space shuttle Enterprise.

In 1979 she returned to the role of Uhura in Star Trek: The Motion Picture and reprised it in Star Trek II: The Wrath of Khan (1982), Star Trek III: The Search for Spock (1984), Star Trek IV: The Voyage Home (1986), Star Trek V: The Final Frontier (1989) and Star Trek VI: The Undiscovered Country (1991). For her appearance in Star Trek V, Uhura infamously danced naked with only two strategically-placed fans and a phaser for comfort, which Nichols found amusing.

In 1994 she published her autobiography Beyond Uhura, which focused on all aspects of her career. She indicated that her greatest pride came from assisting NASA in the space program, which continued well into the 21st Century.

As an inspiration to younger generations, Nichols found herself being cast in later life in roles by fans, including reprising Uhura for a Star Trek fan production called Of Gods and Men in 2007. She also had small roles on Heroes (2007), The Cabonauts (2009) and The Young and the Restless (2016). She memorably played both herself and Uhura in episodes of Futurama.

Nichols had a significant number of awards, including a star on the Hollywood Walk of Fame (1992), a Goldene Kamera (1999), an honorary degree from Los Angeles Mission College (2010), the Life Career Award from the Academy of Science Fiction, Fantasy and Horror Films (2016) and the Inkpot Award (2018). She also had an asteroid, 68410 Nichols, named in her honour.

Nichelle Nichols passed away on Saturday 30 July 2022, whilst staying with her son in Silver City, New Mexico. She had been suffering from health issues for several years, including a stroke in 2016 and being diagnosed with dementia in 2018, which caused her to announce her retirement. She is survived by her son Kyle Johnson. An inspiration to many, Nichelle Nichols will be very much missed.