Amazon releases new teaser for THE RINGS OF POWER

Amazon have released a new teaser for their upcoming Middle-earth TV series, The Rings of Power. The clip is available only on Amazon's website, here for the US and here for the UK. 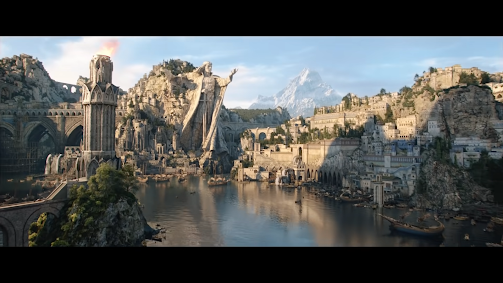 The clip opens with the camera panning over majestic shots of Middle-earth before cutting to Sadoc Burrows (Sir Lenny Henry), a senior member of the Harfoots, a wandering tribe of Hobbits (this is thousands of years before they settle the Shire). After studying ancient books, he announces, "the skies are strange."

The meteor finally crashes to the ground near another Harfoot, Elanor "Nori" Brandyfoot (Markella Kavenagh), who seems curious and decides to investigate. A final shot follows, apparently of a ship sailing into one of the harbours of Númenor.

The Rings of Power is set during the Second Age of Middle-earth and, as the title indicates, tells the story of the forging of the Rings and the descent from a golden age of relative peace and prosperity into war as evil returns.

A longer trailer for the series will be released on 14 July and the series itself will debut on 2 September.