The starship Aurora has crash-landed on planet 4546B, which is largely covered by oceans. The crew has bailed out in escape pods, but only one, Ryley Robinson, has the great fortune to land in a shallow area devoid of hostile creatures. With a functional fabricator, which can turn basic elements into tools, survival gear and components, Ryley sets out to be build a way off the planet...and learn why the Aurora was even there in the first place. 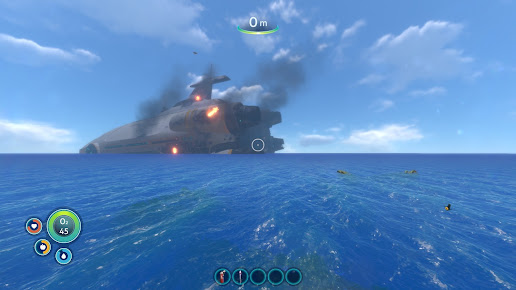 Subnautica is a game that takes great, great delight in putting you in a desperate, apparently insurmountable situation and letting you get on with it, to sink or swim (literally, in this case). Emerging from your escape pod to find nothing but water stretching to the horizon is one of the most striking openings to a video game ever. The only thing you can see is your crashed spaceship...which very quickly explodes, spewing radiation everywhere and preventing you from getting anywhere near it.
Fortunately, if there's nothing on the surface that's of use (which isn't quite as true as it first appears), the same cannot be said of the seabed. The ocean is teeming with fish, fauna and mineral deposits, not to mention a trail of debris from the Aurora which provides a rich source of resources. Your escape pod's fabricator - think of a Star Trek replicator - can create almost anything but requires raw materials. At the start of the game you can easily acquire things like quartz, copper, titanium, silver and gold, which can be fed into the fabricator to create repair tools and a device to help you build a modest habitat. As the game proceeds you can create a radiation suit to explore the Aurora, which in turn provides you with more blueprints to build vehicles and more sophisticated base facilities...and opens up a mystery as to why the Aurora was even in this star system in the first place. 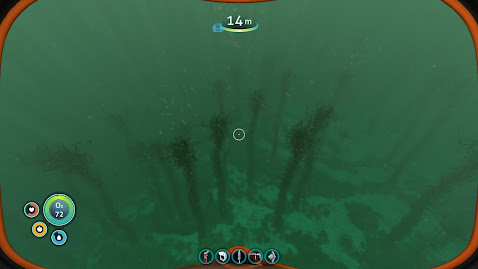 A key thing to understand about Subnautica is that it is a game that expands downwards. Your early explorations will probably end up with you getting an oxygen tank so you can dive deeper without worrying about suffocating so fast, and fins to dramatically increase your speed. This allows you to reach rarer resources, which can be used to craft vehicles. These vehicles can remove your breathing problems altogether and, upgraded to reach greater and greater crush depths, can reach hitherto unknown resources. Rinse and repeat until, around twenty hours into the game, you are guiding a submarine bigger than a bus through caverns more than a kilometre below the surface, trying to track down the yet rarer resources you need to start building an escape vehicle from the planet. Of course, even that is not straightforward, with various other problems cropping up that you need to deal with before you can even think about leaving. 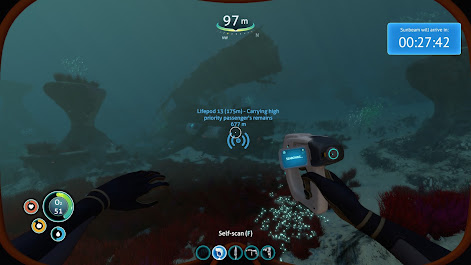 It's a game that focuses on exploration over almost anything else. The underwater landscape is divided horizontally and vertically into different biomes, each with their own resources, unique lifeforms and plant life, most of which can be harvested for resources in one fashion or another. The map feels gargantuan at the start, although once you unlock the Seamoth (a zippy submersible) you soon realise it's not really that massive. It's the combination of horizontal and vertical space that allows the to game to pack in a lot of variety. It's only when you find your way into a huge undersea cavern system that you may find the process of getting back and forth a little laborious, which leads to the fun of building a second base, wholly underwater this time and without the readily-available solar power of your starting location. And from here you can dive even further, into areas that are increasingly strange, dangerous...and rewarding.
Subnautica is a game that gets under your skin. There's a fairly linear progression of unlocking new equipment and options that eventually leads to the endgame, but it's startlingly easy to get sidetracked. Building bases is fun, even if there are only a few useful rooms you can construct. Creating your own multi-level aquarium is utterly pointless, but looks really cool. Constructing a luxurious bedroom is a bit of a waste of time (apart from being able to rest to speed up the day/night cycle, and once you're a hundred metres below the surface, that becomes immaterial) but making a cool pad with posters and a cuddly toy you've recovered from a wreck just feels fun. You can build a coffee maker that serves no useful purpose whatsoever, aside from the fact your character is probably feeling an urgent need for caffeine at all times. Subnautica is a game that rewards creativity and creative thinking, and sometimes going off-course for tens of hours to fulfil some random urge (like building a base in every biome, or constructing an underwater tunnel from one end of the map to the other, or putting out every fire on the Aurora) can be as satisfying as eventually completing the game's story. 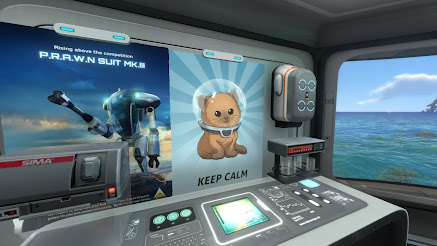 Subnautica is a richly atmospheric game. The sparse soundtrack is excellent and the graphics are evocative, such as your first glimpse of an underwater volcano surrounded by lava, or diving into the shallows at night when everything is lit up by bioluminescence. Your first foray into the underwater caverns is a hair-raising moment when you realise how far you are from the surface if something goes wrong. But the game makes a great virtue of first making you feel utterly helpless, but then giving you a way of dealing with every situation. Having to dodge the ocean's apex predators near the start of the game is nerve-wracking, but coming back later on to deal out some payback via a mech suit loaded with micro-torpedoes and packing a massive skull-drill (well, actually a drill for minerals, but it's versatile) is incredibly satisfying, even if combat is not a particular focus of the game (and you never need to fight anything at all to complete the game, if you prefer a pacifist approach). Subnautica evolves from being a survival game into something of a power fantasy, first by making you feel like an utterly inadequate victim of the environment to eventually feeling like the absolute master of it...at least until some trivial mistake or a run-in with a predator at the wrong moment can take the shine off that smugness, at least a little.
As survival games go, Subnautica might be the very greatest by the way it gives you a punishingly hard situation but also the tools to overcome it, and a goal to work towards. The presence of a story with several major sub-strands is also a welcome change for the genre. The story elements are low-key, mostly advanced through reading codex entries and finding certain locations later in the game, but give you an objective beyond just "survive." 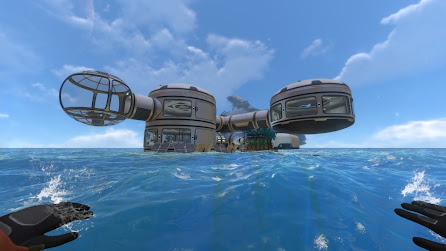 As far as negatives go, there are a few. Subnautica was created by a very small team on a very low budget, and the game does have a few bugs that have not been corrected, despite it being eight years since the game entered Early Access and four since it was given a full release. Particularly annoying is that the game sometimes fails to recognise that you've switched from an underwater environment to a dry one, sometimes leaving you "swimming" through air or "walking" through water, unable to travel vertically. This only happened three or four times in a 40-hour playthrough, but it was slightly annoying. There are also clipping issues, and some weird work-arounds to save memory (for the console versions) which come across as bizarre. For example (spoilers!), there actually are landmasses on the surface of the planet and pretty close to your crash site, but the game hides them in masses of cloud which feels weird and artificial. Vertical descents to the sea floor can also see a lot of sudden texture pop-in.
Other issues have to do with plausibility: the fact there isn't an in-game map feels really silly, since you can fabricate multiple huge bases and a fairly big submarine, but not a piece of A4 paper you fill in as the game proceeds? As it stands, vertical navigation can be a bit of a pain, especially with your big submarine, when all you have to go on are some vague directions from a voice log and a few beacons you can drop. The developers apparently thought a map would make the game too easy, or the ocean less mysterious and threatening, which I understand, but it also makes the game a little too irritating at times. 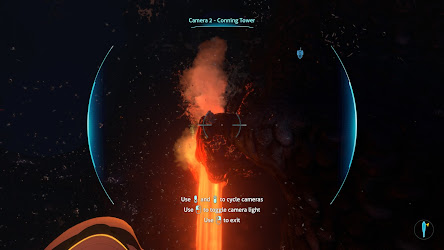 But all of these problems, as present as they are, ultimately pale into insignificance compared to the game's riches. Diving deep to grab a resource you urgently need to complete a vital project and making it back to the surface with seconds to spare. Fending off a crab-squid to make it into an undersea wreck containing the next piece of an important puzzle. The first time you build a Seamoth and are suddenly flitting about in seconds distances you used to need half an hour to cover. Building a sprawling base and sitting outside to watch the sun go down. The first time you find a peaceful cave in the hazardous undersea caverns and realise you can build a new base down there. Or the first time you scare off an huge leviathan of the deeps, having always hidden from them in terror before.
Subnautica (****½) is a game rich in atmosphere, superb in its design and compelling in the creative freedom it gives you. As far as survival and exploration games go, this is one of the very best, and a worthwhile gaming experience for everybody who doesn't have a crippling fear of the deep. The game is available now on PC, PlayStation 4, PlayStation 5, Xbox One, Xbox Series X/S and Nintendo Switch. A stand-alone expansion/sequel, Subnautica: Below Zero, is also available. A revamped "Subnautica 2.0" is also currently in development, for release in the next few months, which should remove most of the lingering bugs and will add new UI improvements and expanded base-building.
Thank you for reading The Wertzone. To help me provide better content, please consider contributing to my Patreon page and other funding methods.
Posted by Adam Whitehead at 21:13