This is a bit of a first: my first non-fiction review on the blog. As I've said before, whilst the blog is dedicated mainly to SF&F on screen, in print and in gaming, if I like something else enough, it's going to go on here as well. 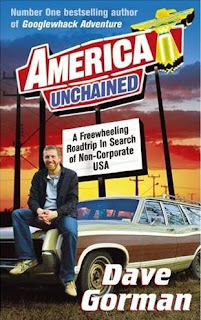 I first encountered the comedian Dave Gorman some years ago thanks to his TV series, The Dave Gorman Collection, in which Gorman recounted how, after a drunken bet with his friend Danny Wallace, he ended up travelling the world searching for other people with the name Dave Gorman. The TV series and the accompanying book were both hilarious, as Gorman's quest to find 52 other Dave Gormans took him on some very odd adventures (including an extremely awkward moment when he had to explain to Israeli airport security why he wanted to visit their country). He followed this up with Dave Gorman's Googlewhack Adventure, in which he tracked down owners of 'Googlewhack' websites, where two words are combined to create a unique website with only one result returned on Google.

This third TV/book pairing opens with Gorman recovering from a particularly soul-crushing four-month tour of the USA, during which he criss-crossed the country several times but didn't see much more of it than the soulless interiors of chain motels. After getting back to the UK Gorman decided he wanted to see the 'real' America, the small towns with local businesses run independently of 'The Man'. And to do this he would cross the country from coast to coast and not once stop at a chain-owned motel or petrol station. Obviously, with local businesses rapidly becoming extinct in the USA, this is not as easy as it sounds.

The plus points first: like his earlier two books, this is a very funny and at times uplifting book. Gorman's writing style is engaging and, despite some parts of his plan being totally bonkers, he pulls you into his story and makes it all seem to make sense, even when a week after setting out from San Diego and having covered a thousand miles he has somehow ended up in Portland and is actually further west than when he started out. The stories of the people he meets along the way, such as the delightful owners of Taylor's Soda Fountain in Independence, Oregon, are also well-told. I suspect the owners of the treehouse resort in Takilma, Oregon and the Giant Beagle Hotel (a hotel in the shape of a huge dog) in Cottonwood, Idaho are going to see an upsurge in business as a result of this book. Gorman is quite honest about his own failings during the journey, such as his near-breakdown upon reaching Moab, Utah. The book also delivered an educational lesson about Mormonism. Prior to this book I hadn't looked at Mormonism at all and simply assumed it was just another Christian denomination (albeit one which had some odd ideas about marriage). Dave's rather disturbing encounter with the religion in Salt Lake City proved to be a bit of an eye-opener, to say the least.

Onto the downside. Whilst Dave's journey is highly enjoyable and informative, there isn't much depth to his mission. He never really analyzes why big chains are taking over from small businesses, even when he champions those small businesses who chase the big chains out of town or survive in the face of fierce competition from them. Also, there is a feeling of repetitiveness throughout the book. Because of the scarcity of independent petrol stations, there is a constant fear of the car running out of petrol, but the number of times that this is brought up borders on the tedious. Similarly, the number of times the car breaks down is as frustrating for the reader as it presumably was for the driver. These occurrences are often told well and usually lead to a great story about the kindness of local strangers or a similar event, but the reader can be forgiven for occasionally being hit by deja vu during the narrative. Slightly odder is the very abrupt end - the final few hundred miles are summarised in just a couple of lines - and some hyperbolic publicity for the book. Contrary to the back cover blurb, Dave is never held at gunpoint by anyone, although someone clearly intending to scare him off does show him his gun. Also, because the book ends the second the journey does, we don't really get to see any conclusions Dave draws from his journey.

The result is a very entertaining book which will hold the attention and is even fairly educational, but it is light on analysis.

America Unchained: A Freewheeling Roadtrip in Search of Non-Corporate USA (***½) is available now from Ebury Press in the UK and the USA.
Posted by Adam Whitehead at 00:21