This year marks the tenth anniversary of two of gamings iconic series: the Half-Life series celebrates ten years since the original release in October, whilst the StarCraft series recently passed its tenth anniversary with significant fanfare. Ten years on, with just under 10 million copies sold, StarCraft is one of the biggest-selling computer games of all time and had a tremendous impact on the multiplayer gaming scene. It became the 'gold standard' for all real-time-strategy games to follow, a position it did not arguably lose until Company of Heroes was released in 2006. 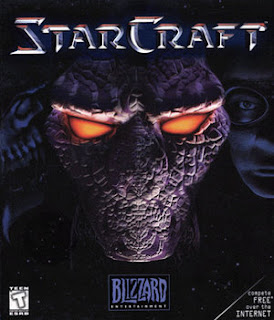 The game is set in a remote corner of the Galaxy known as the Koprulu Sector, starting in the year 2499. Several centuries earlier, a host of undesirabls and visionaries left Earth to settle another star system, but a hyperspace mishap saw them travel instead to the far side of the galactic core, out of easy contact with Earth. Many factions rose and fell before the Confederacy asserted control. A somewhat repressive regime, the Confedracy showed its might by crushing any challenges against its rule with savage force (such as the nuking of Korhal when that world rebelled against its control). That said, the Confederacy's manpower is not enough to maintain total control over its territory, and the outer worlds have a degree of autonomy.

One of the outermost systems comes under attack by a strange race of animal-like creatures who nevertheless seem to move with purpose. In the wake of these 'Zerg' come a much more powerful, terrifying alien race with weapons far beyond human technology, the Protoss. Wherever the Zerg are to be found, the Protoss respond with lethal force, wiping out entire planets to ensure that the infestation is curbed. The initial stages of the game see the player resisting Zerg attacks on under-defended settlements and then frantically trying to evacuate the outer worlds ahead of the Protoss advance, at the same time as a mass-uprising against the Confederacy, years in the planning, finally erupts. As the game advances the player switches to controlling the Zerg, a hive-mind species based on organic technology serving the all-powerful Overmind, whose mission is to find Aiur, the homeworld of the Protoss, and destroy it. Once the invasion is launched, the player switches to controlling the Protoss, as they frantically try to stave off the invasion and destroy the Overmind.

StarCraft's genius at the time was in providing three sides (rather than the traditional two) and giving them each an individual feel and level of technology whilst ensuring that they were balanced against one another. So rather than give the Protoss, Terrans and Zerg all their own tank, for example, the Protoss get a long-range artillery unit that has to constantly build its projectiles, whilst the Zerg get a huge, Starship Troopers-esque rhino-like creature which can absorb punishment and smash through enemy ranks, and the human tank has to deploy in order to fire, limiting its maneuverability. All three are vulnerable to air attacks, so anti-air units must accompany them at all times. And so on. This balancing of the sides was and remains pretty unique (even Blizzard's later RTS, WarCraft III, merely replicated units between sides more often than not). Also, the somewhat stylised gameplay and art style allowed the player to empathise with the characters, arguably for the first time in a strategy game, and allowed the storyline to unfold in a gripping manner. StarCraft's storyline was also fairly dark and cynical, with the final victory coming only at the cost of millions of lives and leaving much of the sector in ruins. 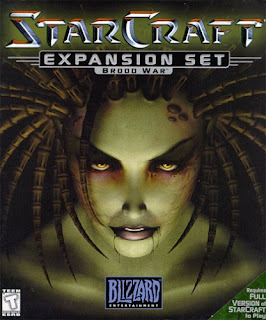 A year on from the game's original release, an expansion named Brood War emerged. Picking up the story a few days after the original game, the Protoss empire is in ruins from the invasion and Aiur is overrun by millions of mindless Zerg. The Protoss are forced to evacuate to the refuge of Shakuras and a temptestuous alliance with the Dark Templar, an offshoot of their civilisation banished centuries ago for heresy but who provided the weapon needed to destroy the Overmind. This reunion is not a smooth one, and is complicated by the arrival of a fleet of warships from Earth. The United Earth Directorate has been keeping tabs on events in this sector for decades, and the lure of advanced Protoss technology and Zerg bio-tech has seen them desptach forces to conquer the region. Obviously, neither the Protoss, the new Terran Dominion which has replaced the Confederacy nor the newly-emerging Zerg factions are happy with this idea and an alliance of convenience is formed to fight the invasion. Brood War is even darker and more nihilistic than the original game, and the twists and turns in the storyline, the brutal betrayals and murders and the vast levels of destruction unleashed against countless worlds is both compelling and somewhat depressing. The emergence of a possible fourth side of the game is also extremely well-done and disturbing. Brood War is also insanely hard, with the final mission being known to send grown men away weeping in frustration.

The StarCraft series has had to wait a long time before its story can continue, but a year ago Blizzard confirmed that StarCraft II is in development and they hope to release it before the end of 2008 (given Blizzard's infamous delays, it may be optimistic to expect them to achieve this). Although it has updated visuals, the emphasis is once again on the story, characters and three balanced sides to allow frantic multiplayer games. With the possible exception of Half-Life 2 before it came out, StarCraft II is the most eagerly-awaited computer game sequel of all time.

StarCraft's influence on multiplayer gaming has been colossal. Battle.net, Blizzard's online multiplayer service, grew by 800% after the game's release, and several million people play the game regularly even today, giving it a serious claim to have the greatest longevity of any game ever released. In South Korea, where the series has shifted 4.5 million copies, it is the multiplayer online game of choice, and televised championship games are a massive audience draw. The most successful StarCraft players are celebrities with half a million or more people in their fan clubs.

Given its age, StarCraft (*****) is easily available at budget price with its expansion pack, Brood War, included. It is available for the PC (UK, USA) and, if you can hunt around for it, the Apple Mac and the N64 as well. Graphically, it's certainly showing its age (argh! Unchangeable resolution!), but the gameplay and story remain as compelling as ever.
Posted by Adam Whitehead at 12:01

StarCraft is just . . . something else in terms of strategy games. I have never seen another strategy game as well balanced as StarCraft was - ask any three top StarCraft players what the best race is, and you are apt to get three different answers.

Have you beaten the final Zerg missions on Brood War? They do get pretty difficult. In particular, the missions take a HUGE leap upwards in difficulty at Zerg Mission 3 (the 10,000 resources mission), at Zerg 7 (you have to play it to understand how much of a jump it is), Zerg 8 (almost certainly the hardest mission in the game, even harder than Zerg 10), and, of course, Zerg 10. It's extremely rewarding, though, to beat them.

Tnx for reminding me of this game. I'm buying it today.