The 17th Century. The birth of the modern age. The monarchies of Europe are being overthrown, starting in England. A new nation is being born across the Atlantic. The old order is beginning its slow, two-hundred-year-long death. Science is revolutionising the world every bit as dramatically as war. In Europe the scientific war is being fought between the two inventors of calculus, Newton and Leibniz, a battle which will end with one being hailed the father of modern physics, the other reduced to a historical footnote. Taking place from 1655 to 1713, Quicksilver is the story of individuals scattered across Europe and the Thirteen Colonies, all being hurled by science, progress and history into the brave new world is dawning, the information age. 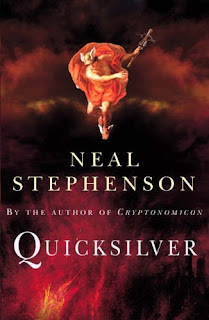 Quicksilver is the first in a monumental trilogy and is in itself a dense, multi-layered work featuring hundreds of characters divided into three plot strands, roughly summarised as 1) the friendship of (fictional) Daniel Waterhouse and Isaac Newton, also incorporating the Restoration and the Great Fire of London; 2) the adventures of the Shaftoe brothers and various others in Vienna, Paris, Versailles and the Dutch Republic; and 3) the Glorious Revolution and the continuing adventures of Waterhouse and co. in England. The second plot is action-packed with battles, fights and political intrigue. The other two are more restrained with lots of scene-setting and historical information. The book cannot be described as a fast-paced page-turner by any means, but what it is is a tremendously deep and vivid exploration of an interesting (but underrated) period of history. Stephenson's writing skills are impressive, with an amusing sense of humour and a perhaps a bit too colourful ability to describe the more dubious practices of 17th Century science (dog-lovers may find one chapter in particular to be nearly unreadable).

Quicksilver is an astonishing accomplishment (it won the Arthur C. Clarke Award for Best Novel in 2004), although perhaps a bit long-winded at times. The biggest criticism is that the Shaftoe storyline ends on a major cliffhanger but I supposed that inevitably is to lead into the next book. Some may also find the first part of the book (Waterhouse in England) rather tedious, as Stephenson is building and depicting the world here rather than furthering the plot. However, those with an interest in 18th Century history may find this the high point of the text.

Quicksilver (****) is the first volume of The Baroque Cycle and is followed by The Confusion and The System of the World. It is available from Arrow Books in the UK (with another gorgeous cover) and from Harper Perennial in the USA.

Aha, someone else reading Quicksilver! I recently posted about the first book:

another great review Wert, but I think I'll read Cryptonomicon before his Baroque Cycle...haven't read Snow Crash either (shame o' pile maybe?) - have you for that matter?