The Lies of Locke Lamora by Scott Lynch

Here's a review from 'the vault', my Word file containing reviews of books that I wrote for my own personal amusement in the days dating back before the blog (although some of these did appear on Amazon.co.uk as well). I note that I'll only be doing this for books I reviewed within a reasonable period of time before the blog started and where my current opinion has not massively changed from my former one. In those cases, a re-read and a re-review would be more appropriate. 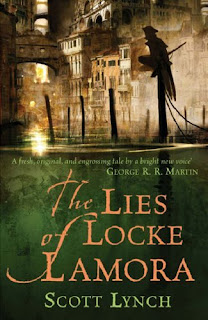 That The Lies of Locke Lamora is a debut novel is difficult to believe. That it not only meets but exceeds the hype that has been built up around it is damn-nigh impossible to believe, yet it is so. In the city-state of Camorr the Secret Peace exists between the criminals and the rulers, a decades-long pact between the Capa and the Duke that keeps the merchants and nobles' wares and riches safe. The only problem is that two people are screwing with the Pact, one a smooth conman and his band of helpers, the other a shadowy killer striking from the shadows without warning. The city is about to be plunged into a war in the shadows as these factions collide.

The story is told skillfully and economically. Lynch knows how to show, not tell. The story moves with a rattling, page-turning pace where exposition is kept to a minimum. As the 'current' storyline moves forward, Lynch gives us frequent flashbacks to the formative years of the titular Locke Lamora, showing his rise from an overconfident scoundrel to a skilled conman and demonstrating how the bonds of true friendship are forged between Lamora and his band of knaves, the Gentlemen Bastards. Amongst this he also brings to life his prized creation, the city of Camorr itself, a traditional fantasyscape of guards, merchants and peasents eking a life in hovels under the watchful eye of the aristocracy, but with an element of the strange introduced as all are dwelling in a city forged thousands of years ago by an inscrutable alien race whose disappearance remains troubling. With its many islands and districts, temples and guilds shadowed by towering glass monoliths, Camorr is as much a character as Locke Lamora himself, a city that immediately joins Ankh-Morpork, Lankhamar and Amber as a perfect setting for stories of the fantastical.

Lynch is also a master alchemist of taking his influences and whipping them into something fresh and exciting. He has George RR Martin's skill are creating great characters and then unexpectedly killing them, mixed with early Raymond Feist's sheer gleeful storytelling and occasional eye for detail (the merchant houses sequences seem heavily inspired by the trading house chapters in Feist's Rise of a Merchant Prince). The story shifts tones with ease, moving from its early chapters of setting up cons and marks (feeling oddly reminiscent of the British TV series Hustle) to a much darker place, yet always with a certain enjoyable wit about it. Lynch knows how to make the reader laugh, even if the humour turns from light amusement to midnight-black as the story progresses.

Criticisms? Some characters feel somewhat under-developed, particularly one who is introduced briefly in one scene and then brutally despatched a few pages later, but without any real time for the audience to build up any sympathy, meaning that Locke's grief isn't entirely relatable. And that's about it. The book is surprisingly free of rough edges for a debut work.

This is the opening volume of a seven-novel sequence, yet it is virtually entirely self-contained, with only the closing few pages giving us a sense of where the sequel, Red Seas Under Red Skies, will take the story next.

The Lies of Locke Lamora (****½) is available from Gollancz in the UK and from Bantam in the United States.
Posted by Adam Whitehead at 20:05

Email ThisBlogThis!Share to TwitterShare to FacebookShare to Pinterest
Labels: scott lynch, the gentleman bastard, the lies of locke lamora

My main problem with the book was in terms of Locke's actions near the end of the novel. What he did just seemed out of character for him.

I think Locke is actually somewhat traumatised from his childhood. He has some quite dark flashes throughout both LoLL and RSURS. I'm wondering if Lynch will expand on that in future books.

I agree with brett. It seemed in the latter part of the book the author tried to force certain things to happen with contrived situations and Locke acting out of character. This contrasted with the natural flow of the storyline up until then. Nonetheless, a very enjoyable book overall.

I haven't been able to start read this book, it still lies on my Pile o' Shame. But definitely I have to read it.

Another gripping review Adam, but you conceded the book at least a half-star too much (if I induce from your other reviews; this is ofcourse only my own opinion) - I review the book for our blog; thought very highly of it, but I wouldn't think of it as near perfect...Lynch has potential to write one though :)