David Gemmell sadly passed away after completing about 90,000 words of the third and final volume of his Troy Trilogy. Fall of Kings was completed by his wife, Stella (who was his editor and researcher throughout the trilogy), and published at the end of 2007. 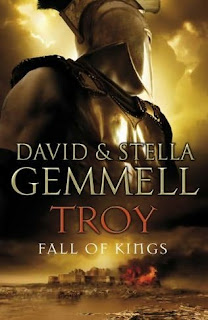 We pick up after the events of Shield of Thunder. The Great Green is beset by war. Agamemnon and his allies (including the reluctant Odysseus) have secured most of the west and are now poised to strike directly at Troy itself. Hektor is leading the effort to dislodge their armies to the south, whilst Banokles - very reluctantly - is commanding forces to the north. Helikaon is ordered to sea, to take Kassandra to the island of Thera, but along the way he meets Odysseus and is drawn into a side-adventure to Ithaka.

Fall of Kings is a worthy conclusion to the trilogy. It's very difficult to tell where David Gemmell left off this work and his wife took over, and it's probably for the best to ignore that diversion and just enjoy the story. This book is, predictably, the story of the siege and fall of Troy, and frankly it may now have to be classified as the definitive modern retelling of the myth. The duel between Hektor and Achilles is here, but with a very interesting spin placed on it, whilst the fate of Helen is beautifully depicted. But it's the end of the book, particularly the last stand of the survivors within the palace of Troy, which will probably live longest in the memory.

Fall of Kings (****) is definitely not quite as polished as the prior two books in the series, but finding out the fates of the characters we have grown to know and love over the course of the trilogy more than makes up for any (minor) weaknesses in the prose. This is a fitting end to a monumental story of war, love and honour, and a grand retelling of one of the greatest myths of all time. Thoroughly reccomended.

The book is available from Corgi in the UK and from Ballantaine in the USA.
Posted by Adam Whitehead at 11:53

I really need to find my way around some more Gemmell (I've read first three Drenai books and thought them great pageturners albeit a bit "lite"). great reaview though!

Sounds like an interesting read considering that I enjoyed "Iliad" and "Odyssey".

I absolutely loved this book from beginning to end and finished it on the train whilst trying not to cry, mainly because of the ending of the book itself but also because it was the end of the trilogy. The attention to detail and the growth of individual characters, no matter how small, made the story and the world in which it was built so real and showed the difference that even one person can make. The fight between Achilles and Hektor ended with a spin on the original tale and the subversion on the famous tale of the Trojan Horse and how it allowed Agamemnon’s forces in to the city was brilliant. I have never read a book that made you so wish for a time of heroes and honour I am so sorry that there won't be anymore of David's books. However, as I haven't read any others of his yet I have a long list of them to look forward to, I hope they are all as good. I hope that one day my writing will make people feel so engrossed and believe whole-heartedly in my worlds and characters just as I have in these.

I gave up on this book.

I found the first two acceptable, although tending toward the tedious at times, but this last one didn't draw me in at all, and after a 100 pages or so I reluctantly gave up, although I hate doing so.

The first two books had half-decent characterisations, but this one really seemed to lose it.

I haven't read any other Gemmell books, but might give it then a try. For Troy, why not read the originals ? A million times better than anything in this series.