This is the second book in the Crossroads series, and the middle volume of the first story arc, reportedly a trilogy (preceded by Spirit Gate, which I reviewed here, and to be succeeded by Traitor's Gate, due in 2009). 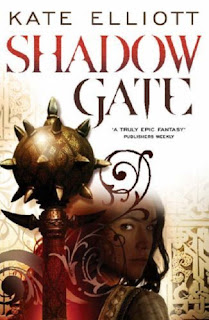 In Spirit Gate, a number of outlanders arrived in the Hundred to find the land beset by troubles. Armies of vagabonds and cutthroats have appeared out of nowhere to challenge the justice of the reeves, the giant eagle-riding police force who have ensured the rule of law in the land since the disappearance of the Guardians many decades earlier. The outlanders, led by Captain Anji and his wife Mai, joined forces with Reeve Joss and the militia of the city of Olossi to defeat one of these roving armies and build a safehaven in the south-west of the Hundred. However, all are troubled by rumours of beings wielding supernatural powers and riding winged horses - as the Guardians were said to have done - apparently leading the invading armies.

Shadow Gate is a worthwhile and enjoyable follow-up to the first book, mostly because it works on two levels. On the one hand, it is a direct sequel, following up on the adventures of Joss, Mai, Anji, Shai and others following the Battle of Olossi. On the other, it is also parallel novel to the first, explaining a great deal of the mysteries in the first volume. One of the key weaknesses in the first book, I felt, was that the nature of the winged horse-riding beings and some storylines, most notably that revolving around the wandering envoy-priest and the bizarre antics of the slave Cornflower, were decidedly under-developed, to the point where their inclusion seemed to be extremely confusing. In this second volume you get the answers to those questions, told in an accessible and intriguing manner. Any thoughts that this was going to be a simple good-versus-evil struggle go out the window as we learn more of the nature of the Guardians, the rules they operated under and some explanations as to why they disappeared (although the full story, I suspect, will have to wait until Book 3).

At the same time, we get to meet some new characters, such as Nallo, the refugee who is chosen to become a reeve but whose training is complicated when the main reeve base comes under siege, and Avisha, a simple village girl who attracts Mai's favour and has to sort out a complicated love life as well as caring for her family. The new additions to the cast generally give us new and interesting outlooks on the world and the plot, and don't slow the story down too much. The pacing is also good, but arguably the conclusion is not as strong as it might be. Just as the Battle of Olossi seemed to happen very quickly at the end of Book 1, so the two big set-piece battles at the end of Book 2 also get short shrift, but arguably this is less important this time around as revelations about characters and several dramatic scenes between major characters form the meat of the finale, which does a better job of leaving the reader wanting to pick up the next volume straight away.

Spirit Gate (****) is a notably superior book to the first one, and actually makes the first one more enjoyable as well (a full re-read of the first book after the series is completed will pay unexpected dividends, I suspect). The book is published by Orbit in the UK and by Tor in the USA.
Posted by Adam Whitehead at 19:08

It's good to see that it's getting better and that it answers some questions posed by Spirit Gate.