This Forsaken Earth by Paul Kearney

This Forsaken Earth is the second novel in Paul Kearney's Sea Beggars sequence, a planned four-volume nautical fantasy that was unfortunately cut short by Bantam's decision to drop the series. Whilst Paul Kearney has said the series will eventually be completed - the third book, Storm of the Dead, was well on the way to completion - that will have to wait until the rights revert to him from Bantam. This is a shame as this is an excellent series and the second volume does end on something of a cliffhanger. 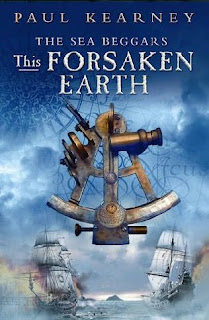 Rol Cortishane is now a seasoned brigand, his ship - the Revenant - and its crew delighting in destroying vessels belonging to the nation of Bionar. However, Bionar is divided in a bitter civil war between Rol's half-sister and the incumbent king. When his sister calls upon Rol's aid, Rol reluctantly agrees to help her and embarks on a dangerous journey into the heart of a war-torn country.

This Forsaken Earth is notable for being a nautical epic fantasy where a good 90% of the action takes place on dry land (the source of much criticism for this novel). Well, yep, that's a shame for those expecting some Patrick O'Brien-with-wizardry antics, but on the plus side we still get a damn good story to make up for it. Kearney has lost none of his formidable skills for depicting large-scale warfare or bloody sieges, and his desperately flawed protagonists (Rol is not a very nice person at all) almost literally act like fishes out of water as they deal with the challenge of land-based combat. At the same time Rol's shadowy origins are becoming clearer and we get some hefty clues towards the end of the novel that Kearney was headed somewhere truly apocalyptic with this series.

I think that will probably be the deciding factor for many people whether they wish to read this book and its immediate predecessor, The Mark of Ran. This is an excellent book, not quite Kearney's best but still very solid, filled with action, some great plot twists and some decidedly twisted character development. But it is clearly the second act of a much bigger story, and we have an indefinite period of time to wait for the next part of the story. If you don't mind waiting, definitely check out these two books ASAP.

This Forsaken Earth (****) is apparently going out of print by Bantam, but copies can still be found in the UK and the USA.
Posted by Adam Whitehead at 19:18