Back in 2001, a movie based on the Dungeons and Dragons roleplaying game was released. It can charitably be described as, "Not all that it could have been." At the time many fans pondered why Wizards of the Coast had allowed an inexperienced director to adapt their best-known product using his own (not particuarly impressive) homebrew campaign world as a basis, rather than using some of their best-selling novels as a source, such as RA Salvatore's Drizzt Do'Urden books or, the more popular suggestion, the epic Dragonlance saga by Margaret Weis and Tracy Hickman. Well, in 2006 it appears that someone finally took the (rather obvious) move of licensing the Dragonlance world and series to be used as the basis of a movie trilogy. 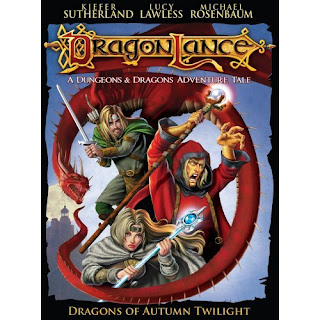 For readers of a particular age (those who grew up in the mid-1980s), Dragonlance is as seminal a fantasy touchstone as Tolkien. The original Dragonlance Chronicles (Dragons of Autumn Twilight, Dragons of Winter Night and Dragons of Spring Dawning) is a traditional tale of a band of heroes who come together and get embroiled in the ongoing war between the armies of dragons, led by the dark goddess Takhisis, and the forces of light, represented by the god Paladine. Over the course of many battles and adventures, they eventually succeed and overthrow the Dark Queen. What is more interesting, however, is the internal journey many of the heroes undertake, most notably that of the extremely morally ambiguous mage Raistlin, who is torn between his loyalty to his friends and his own thirst for power, which forms the basis of the superior sequel series, The Dragonlance Legends (Time of the Twins, War of the Twins, and Test of the Twins).

That a film adaption of Dragons of Autumn Twilight has taken so long to arrive is surprising. The original trilogy sold well over 4 million copies in its first decade in print, and Weis & Hickman are often credited - alongside Stephen Donaldson, Terry Brooks and Raymond E. Feist - of helping to kick-off the post-Tolkien epic fantasy boom. At the same time, the demands of such an adaption are notable. The story features sequences involving armies of dragons attacking cities, lots of magic and enormous battles. Making a live-action movie would have been impossible before the advent of the CGI age, and an animated film would have disappointed most of the fans.

Which makes it all the more inexplicable that, in 2006, Paramount and Wizards of the Coast agreed to go with an animated film. And not a CGI movie or a high-quality animated feature employing the best Korean or Japanese animation houses in the business, but a cheap 'n' cheerful adaption by an unknown Indian company which employs less-advanced animation techniques than mid-1980s episodes of He-Man. The animation is somewhat stilted throughout and the character designs tend to be somewhat bland (with arguably only Fewmaster Toede really being a memorable design). Even more bizarre is the decision to use rather weak CGI to depict the dragons and their half-humanoid servants, the draconians, leading to a mishmash of styles which detracts from the story.

The other problem is that the entire 400-page novel has been squeezed into a 90-minute film, leading to severe compression of the story. Fan-favourite scenes such as the wicker dragon are thus lost, and climatic events in Pax Tharkas are simplified considerably. Lots of character development is also abandoned on the cutting room floor, and elements such as Tanis' continuing inner turmoil at being caught between the elven and human worlds but not a part of either are depicted clunkily. Raistlin's story arc more or less survives intact, and is enlivened by a decent vocal performance by Kiefer Sutherland.

That all said, the writer does do a good job of transmitting the background story to the viewer. A pre-credits, Fellowship of the Ring-style prologue gets the story across quite straightforwardly, and the adaption makes use of the fact that they're not making it up hurriedly as they go along (as the original writers of the novels did) to set things up ahead of time. High Lord Verminaard doesn't just show up out of nowhere as he does in the books, for example.

As a slice of entertainment for young children, the film works quite well (although a few scenes do contain blood, and Tasselhoff Burrfoot has become a psychopath in this adaption, stabbing a goblin repeatedly through the heart in one particular scene, so parental discretion is advised), and fans of the novels may get a nostalgic kick out of seeing their old favourite characters on screen. It's also notably a better viewing experience than either the live-action 2001 Dungeons and Dragons movie or its utterly horrific direct-to-DVD sequel (Wrath of a Dragon God, which may actually be the worst movie created in the history of humanity to this time, the works of Uwe Boll of course excepted). However, the adaption does have the feel of being a major missed opportunity. With better animation and a more generous running time, this could have been a very good adaption indeed, but instead it has to settle for being rather mediocre.

Dragonlance: Dragons of Autumn Twilight (**) is available in the United States on DVD, and as a Region 1 import in the UK.
Posted by Adam Whitehead at 14:04

David Bowie has the perfect voice for Raistlin. It's a shame Peter Jackson will probably never adapt this movie to film. It could be just as big and interesting as LOTR. Especially if they got artistic help from the likes of Clyde Caldwell and Larry Elmore (who both appear to still be alive). What a shame, what a shame... Sometimes I wonder if movie producers really have their hands on the pulse of the audience.

I've collected an read the entire series,an when I seen this movie on utube,I was super excited.but,then I watched it,an was seriously disappointed.flint wasn't as old an run down as they made him,at the start of their journey,they took a great novel story an did it a major injustice,an thanks to thati doubt they will do the rest of the books.like war of the twins,test of the twins an time of the twins,or the story of Huma hero of the Lance.a up grade in artistics,would have gotten this story the praise it deserved.