Back in 2004, actors Ewan McGregor and Charley Boorman took off on a trip from London to New York, travelling the 'long way round' by motorbike. They started in London, crossed to France and then drove by road and dirt track across Europe, Russia, Ukraine, Kazakhstan, Mongolia and Siberia, from where they caught a plane to Anchorage, Alaska, and continued by road through Canada and the USA to New York City. A thoroughly entertaining documentary series (and DVD) and an interesting book were released to accompany the journey.

Three years later McGregor and Boorman regrouped to do it all again. This time their plan was to ride from John O'Groats at the northern-most tip of Scotland to Cape Angelhus, the southern-most point in Africa where the Atlantic Ocean meets the Indian, a journey of some 14,000 miles. Again it was all done by motorbike, a few ferry crossings excepted. 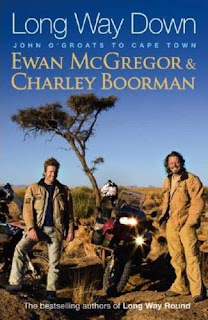 Where Long Way Round was entertaining from start to finish, Long Way Down feels a little off as a book. This is a huge adventure, involving the crossing of the most dangerous and unstable continent in the world from north to south, but it all feels a little slick and sanitised. The fun of Long Way Round was that Boorman and McGregor didn't know what the hell they were doing, and for all their preperations and precautions, the entertainment came from watching them grapple with the elements, deal with the people (friendly and not) they met along the way and exploring some of the remotest and least-well-known landscapes on Earth. Long Way Down is not really the same thing. Learning from the lessons learned on the prior trip, it feels like they've massively overcompensated. Their journey this time is timetabled almost down to the hour, and the constant need to be on time for ferry crossings or meetings with UNICEF charities takes a lot of spontaneity out of the trip, meaning less time for random stops or side-trips along the way. To be sure, the writers' highlighting of the excellent and eye-opening works being done by UNICEF in Africa is very worthy, but they aren't doing the cause any favours when it feels like 50% of the book consists of them whining about the timetable situation. In addition, because Africa is far more heavily populated and far more dangerous than the their prior trip across Asia, they tend to be accompanied by their support vehicles or even armed guards for long stretches, reducing the feel of 'two mates against the world on bikes' that made the first book a lot of fun. To be sure, no-one would want these guys put in danger for their entertainment, but the dynamic feels a little off. Maybe giving more focus to the other guys on the trip and making it more of a gang adventure rather than focusing on MacGregor and Boorman would have worked better.

Tellingly, it is in the second half of the book, once they're free of the ticking hand of the clock and can do their own thing, where the journey comes to life, more amusing anecdotes about the people and wildlife they encountered emerge and we get more of a sense of excitement about the whole trip. However, it comes a little too late in the day to make the book as good a read as Long Way Round.

Long Way Down (**½) is available now in the UK from Sphere Books and on 15 July from Atria Books in the USA.
Posted by Adam Whitehead at 15:46

There was a similar tv series with McGregor as well which I saw a while back. I had hopes for it, but was surprised to find it quite boring.