Peter David has had a stroke

The crappiest way to end the year. News has broken that novelist and comic book writer Peter David has suffered a stroke. 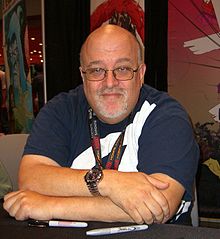 David has many accolades to his name, arguably most notably as the author who ended the "Is Pluto a planet?" debate by having the Borg destroy it in a Star Trek novel. He also picked up the numerous loose ends left dangling by the Babylon 5 TV series and resolved them in a particularly fine trilogy of tie-in novels in the early 2000s. He also wrote what is arguably the greatest TV tie-in novel of all time in Vendetta (a Star Trek: The Next Generation novel) and spent twelve years writing The Incredible Hulk, to considerable critical acclaim. I wish him a full recovery and for many more comics and novels to come from him in the future.
Posted by Adam Whitehead at 20:32

Damn. Here's hoping he sees a full and speedy recovery.

remember his Hulk run vividly, and I can't argue Vendetta being one of the best Trek novels.