The Hobbit: An Unexpected Journey

Many years ago, the dwarves of Erebor, the Lonely Mountain, were driven from their home by Smaug, last of the great dragons. Thorin Oakenshield, the grandson of the last King of Erebor, has vowed to reclaim his home and called upon the dwarven clans of Middle-earth to aid him. Rebuffed, he instead plans a daring raid of a few chosen dwarves to slay Smaug whilst he sleeps. To aid them, Gandalf the Grey has promised to recruit a skilled burglar: Bilbo Baggins, a hobbit of the Shire. Their journey will take them through forests and caverns, all the while being tracked by an old enemy of Thorin's... 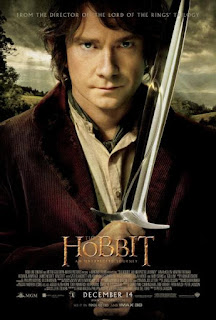 An Unexpected Journey is the first movie in a trilogy based on J.R.R. Tolkien's 1937 novel, The Hobbit. That's Tolkien's short novel which, by word-count, is just under a fifth of the length of The Lord of the Rings. There's been enormous controversy about director Peter Jackson's decision to split The Hobbit into three three-hour films, with a fear that there simply isn't enough story to warrant it and this will result in padding. That is the threat that constantly hangs over the film and to be fair, it mostly avoids it by making a major change: Jackson has decided to show in full Gandalf and the White Council's side-story to confront and destroy the 'Necromancer' of Dol Guldur (a storyline that takes place off-page in the novel). Whilst also controversial amongst fans, it does give Jackson a rich vein of story to mine to add to proceedings, but how successful this will be remains to be seen (this subplot is only really started in the film).

The movie opens with the older Bilbo (still played by Ian Holm) writing an account of his adventure for Frodo and narrating the destruction of the human town of Dale and the neighbouring dwarven mountain-city of Erebor by Smaug. We then have the traditional opening from the novel, with thirteen dwarves and the wizard Gandalf turning up on Bilbo Baggins's doorstep to recruit him for an adventure. By the time the young Bilbo (Martin Freeman) agrees to join the quest, a rather surprising forty minutes has passed. This sequence risks interminability, but Jackson takes advantage of the time to introduce the thirteen dwarves and give them some character traits missing from the source material. James Nesbitt's Bifur in the somewhat cynical joker of the pack, whilst Fili and Kili are the over-eager young guns out to impress their older peers. Dwalin is the bruiser and Balin the wise old - and somewhat pedantic - sage of the group (Ken Stott is excellent in the role). Bombur is fat and little more than that. The real impact is made at this stage by Richard Armitage as Thorin Oakenshield. Armitage is charismatic and has steely resolve and presence in his role, and is the standout performance of the movie (and, dare I say it, impresses more than even Viggo Mortensen as Aragorn in the original trilogy).

As well as showing the Necromancer stuff on-screen, Jackson has made some other changes to the story to increase the dramatic weight of events. Thorin now has his own nemesis, a mighty orcish warrior whose arm he cut off in battle. This warrior, long-thought dead, has returned and is now chasing down Thorin and his band (a bit like Lurtz in the movie version of Fellowship of the Ring, but a lot smarter and more continuously present). It's another change that I think some won't like, but as a dramatic device it worked fairly well at introducing some tension to the film. However, what was really distracting is that this orc has the exact same skin tone and texture as the Engineers in Prometheus and is likewise gigantic. His story arc is left unfinished at the end of the film, so we can assume he will return in the sequel (rather cleverly, as it provides a potentially better way of explaining a subplot in that film than Tolkien was able to do in the book).

Elsewhere the film feels a lack of cohesion: the Necromancer plot has little to do immediately with Thorin's quest, so every time we cut away to Radagast the Brown (a great performance by the ex-Doctor Who Sylvester McCoy) trying to resuscitate hedgehogs (!) or Gandalf discussing backplot with Saruman and Galadriel for what feel like nineteen hours, the movie flags. In fact, the dwarves get so bored of Rivendell (missed opportunity: someone saying, "On second thoughts, let's not go to Rivendell. 'Tis a silly place,") they just up and randomly leave. Once the dwarves are back on the road together and causing mayhem, the film perks up and more fun is had, even if sometimes accompanied by some unconvincing CGI.

The scenes in the goblin caves in the Misty Mountains are entertaining, but also daft. Barrie Humphries as the Goblin King works rather better than most were likely expecting (and there's a humourous nod to Gandalf's "You shall not pass!" moment from the original trilogy), but the extended battle-and-escape sequence is too slapstick to really present much tension. This contrasts to the successful scene where Bilbo meets Gollum (Andy Serkis, on fire as always) and acquires the Ring, which is brilliantly acted by both parties and features some nice tonal variations from comedy to menace and back again.

Overall, The Hobbit: An Unexpected Journey (***½) can be called a qualified success. It has some big problems that Jackson has not been able to overcome: the storyline is too slight to sustain three hours and even with the addition of extra storylines and characters, there are some scenes which feel like wheel-spinning for the sake of it (most notably at Rivendell). There is also a near-omnipresent use of CGI in almost every scene of the movie. The original trilogy worked best when the camera was allowed to film natural landscapes or when miniatures were used to depict locations and give them a sense of reality and weight. Here, CGI is much more freely employed, often with less regard for hiding the fact it is CGI. In particular, there is a dearth of truly awesome shots of the countryside of New Zealand in all its glory compared to the original trilogy: here, even many of the landscape shots have been bathed in CGI until they glow with lens-flare. Even in 2D and at 24fps, the film has a 'faker' sheen across it than the original films, which sometimes distracts.

Fortunately, Peter Jackson has learned from the mistakes of George Lucas and has remembered to include plenty of character moments to keep things more real. Armitage is awesome, as previously mentioned, but it's Martin Freeman's performance as Bilbo which anchors the movie. His character arc (and Thorin's, which develops in tandem) is well-handled and Freeman nails this icon in a way he didn't manage with Arthur Dent (in the disappointing Hitch-Hiker's Guide to the Galaxy movie). These character and thematic moments are less-successfully handled than in the original trilogy, but still give the film some dramatic weight and tension that keeps things interesting.

The film is on general release now and will be released on DVD and Blu-Ray - twice over - in 2013.
Posted by Adam Whitehead at 00:18

Wow! I envy you! I knew I wouldn't be able to see it right away, but perhaps next weekend.

Well, I think we all knew there would be problems with the films, as there were a few here and there with LOTR. But if I can say I had a good time, I'll count it as a success. Thanks so much for this review, Adam! It'll be interesting to contrast my own thoughts with yours in my head as I watch! :)

"Menace and back again"

I saw it today, and I had a great time. It can be hard to find it in 48 fps, but the effect worked really well for me.

Be grateful you didn't see the Radagast scenes in 48 FPS. The scenes where he was on his sled looked horrible in a high frame rate viewing, like outdated video game graphics quality.

On the other hand, some of the CGI looked better.

Am I the only one who watched the Goblin King scene and thought that he was going to threaten to read them some poetry and then throw them out of an airlock?

I agree that it works as a whole but that there are parts that don't.

I like your assessment of the film, Adam. While I didn't personally have any issues with the pacing or all the extra stuff (felt like I was being treated to an early Extended Edition), I can objectively see there were some problems. I didn't expect it to be perfect but I also didn't expect to be as impressed with it as I was. I was worried, and thankfully I left the theater with the warm glow of a visit back to Middle-earth.

I think that Martin Freeman and Richard Armitage's performances went a LONG way towards that warm glow. Wow, they were most impressive, especially later on in the film. If the next two are at least this good, we've got something special in the works.

Definitely not. I liked Viggo, but he had a somewhat whiny voice and lacked the gravitas to be a king. He was a fantastic Strider, but not a brilliant Aragorn.

Some of that is down to the script, as well. Aragorn's character was damaged a little by his tiresome self-doubt issues (not in the book), which is a problem Thorin never has.

Yep, can't follow you on that one. Viggo Mortenson was pitch-perfect both as a flawed Strider and as would-be king. The performance bears that out, in my opinion, but I think the idea is enhanced by watching all the extras and seeing the kind of influence he wielded on the set and the way in which he was an inspiration to the other actors in his embracing of the character and in his devotion to the craft.

I have to second that Wow - this is a first rate overview of both the book and the first of the three films. Personally I felt it hit the mark on the whole and although I saw half in 3D (sans glasses) and the rest in 2D I still enjoyed it. Hate it when you walk into the wrong theatre! I still love the book and will probably continue to re-read it every few years as ever. But I am looking forward to the rest of the films.