The Belly of the Bow by K.J. Parker

Shastel is a country owned and run by an academic foundation, whose bank holds the debts of its impoverished citizens in perpetuity. Spying an opportunity for profit, the Loredan Bank has taken over the nearby island of Scona and is undercutting the Foundation's economy, sparking a trade war that is in danger of turning very real and very bloody. For Bardas Loredan, living in seclusion as a bowyer in Scona's backwater, the last thing he wants is anything to do with the schemes of his ruthless brother and pragmatic sister. But he is soon drawn into the conflict, even as he comes to realise that his attempts to live a good life may be nothing more than a sham. 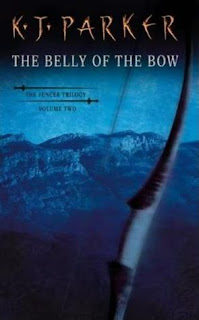 The Belly of the Bow is the second volume of K.J. Parker's Fencer Trilogy. At first glance, this is a slighter novel than Colours in the Steel. Whilst Colours centred around a massive siege and the attempts to defend a city, The Belly of the Bow is a much more personal story focused on the dysfunctional Loredan family. The war this time is more in the background, and played for maximum cynical impact. Parker's black humour and refusal to glorify the horrors of war combine to provide a damning indictment of violent conflict and the reasons for it.

As a personal, more character-focused story the novel takes a while to get going. The complex relationships between Bardas, his sister, brother and niece are built up steadily but the thematic point of the novel is elusive until a shocking late-novel development throws everything into sharp relief. The book is essentially a character study of Bardas Loredan, who believes himself to be the 'good' member of the family, a hard worker who sends money home to his younger two brothers on their farm and has always tried to do the right thing. As the novel demonstrates, Bardas is kidding himself (his previous careers as soldier and lawyer-at-arms being steeped in blood and mayhem) and his self-belief is a rather brittle thing. When faced with a revelation of a betrayal on an massive scale, his reaction isn't reasoned or understanding, but a cruel and merciless lashing out that is genuinely unexpected. 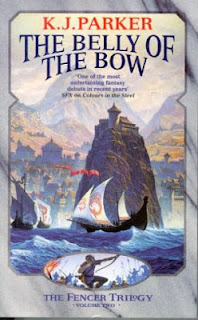 The novel pivots on this moment (which happens very late in the book) and doesn't fully work until you realise that moment - a moment of gut-wrenching horror that even George R.R. Martin might consider excessive - is coming. As such, the book works a bit better on re-reads. However, as well as Bardas the novel concentrates a lot on his brother, Gorgas. Gorgas is best described as an ex-sociopath who has genuinely reformed from being a violent lunatic and is now seeking to make amends for his past mistakes. Unfortunately, Gorgas is rather disturbingly single-minded in this attempt to seek redemption, and the crimes he commits to achieve it actually dwarf his original offence. The contrast between the two brothers (and Bardas's angry denials he is anything like his brother, which ring increasingly hollow as the trilogy unfolds) is a key point of the novel that Parker develops effectively.

As with much of Parker's work, the tone is often deceptively light-hearted whilst masking a cynical edge, the humour is jet black and the characterisation is strong, but takes a while to come to the fore. Also, as it standard, the novel is packed with information on the creation and use of a standard fantasy weapon of war, in this case the bow. These passages of mechanical engineering may appear skip-worthy, but Parker actually cleverly uses the bow as a metaphor for her(?) characters and the world they live in. Other characters from Colours in the Steel return and there is some more information on the Principal (less of a magic system than an ability to nudge future probabilities to get a more favourable outcome, but due to chaos theory this is wildly unpredictable), but the focus is firmly on the Loredan family and their issues.

The Belly of the Bow (****) is a less-obviously engaging novel than its forebear, but once the scope of Parker's ambition for the book becomes clear it turns into a much more impressive work. The novel is available now in the UK and USA.
Posted by Adam Whitehead at 10:46

Email ThisBlogThis!Share to TwitterShare to FacebookShare to Pinterest
Labels: k.j. parker, the belly of the bow, the fencer trilogy

A very thoughtful and detailed review.

A bit off topic but thought you might find this amusing:
http://fuckyeahscifiwomenofcolour.tumblr.com/post/37413846476/author-scott-lynch-responds-to-a-critic-of-the