On Boxing Day it was announced that Gerry Anderson had passed away at the age of 83. Anderson was one of the most famous figures in UK TV in the 1960s and 1970s, working on a number of science fiction and fantasy shows. However, he will always be closely associated with a number of children's series featuring puppets operating highly-detailed vehicles: Supercar, Fireball XL5, Stingray, Thunderbirds, Captain Scarlet and the Mysterons, Joe 90 and Terrahawks. 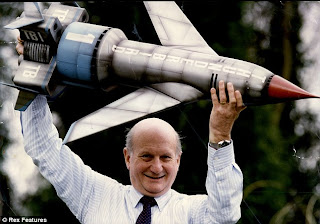 In addition to his puppet shows, Anderson created several live-action SF series: UFO, Space: 1999 and Space Precinct (as well as the non-SF The Protectors). Despite his fame and his shows' place in popular culture, he was unable to find a format with longevity: aside from Terrahawks, none of his shows lasted more than two seasons. Thunderbirds returned with a live-action movie in 2004 which Anderson was not involved with, criticised heavily and was panned on release. Anderson did produce a two-season revival of Captain Scarlet in 2005 (using CGI) which was critically well-received, but which was not a financial success.

Despite the setbacks, Anderson's shows were always worth watching. They usually presented a positive view of the future and of the ways that technology could improve people's lives, though tinged with caution over its misuse. His shows also had production values that defied belief for their day: the model effects (and endless, artistically impressive explosions) on Thunderbirds are particularly stunning for a series made in 1965. His 1970-71 TV series UFO (which inspired the 1994 computer game X-COM and its sequels and recent remake) was also notable for being aimed squarely at adults, with a dark theme of paranoia running through the series along with a much grimmer tone than his other work, a move which was very successful.


Anderson also had an influence on other shows. His work inspired Ron Thornton, the creator of the CGI on Babylon 5 and, later, Star Trek: Voyager, to make space scenes more colourful and original (Thornton later worked with Anderson on the new Captain Scarlet). Anderson's habit of putting highlights from the episode in the title sequence of each episode also led to the creators of the newer Battlestar Galactica to do the same thing in their show, somewhat controversially. His work was also very popular in Japan, where even a tribute anime to Thunderbirds was produced in the 1980s (called Thunderbirds 2086 with the permission of the company that produced the original show, but without Gerry Anderson's involvement).

In 2011 Anderson was working on a revival of Thunderbirds using CGI, but the status of the project became uncertain after he was diagnosed with Alzheimer's and had to retire. Hopefully, this project will be revived and introduce a new generation of fans to his work and legacy.
Posted by Adam Whitehead at 21:03

They re-ran Thunderbirds, Stingray and Captain Scarlett when I was a kid, I had great fun watching them with my dad. It always seemed strange to me that he wanted to work on live action so badly when his 'Supermarionation' allowed to produce SF that would never have been possible at the time (compare the effects in Thunderbirds with contemporary Doctor Who). I guess great artists never recognise their own crowning achievements.

As I understand it, the reason none of his shows lasted was mostly down to Lou Grade, who would create just enough episodes to syndicate in America and then cancel the show, moving on to another program which he could sell on for more money.