A superb map of Earwa from Scott Bakker's PRINCE OF NOTHING

Noted Prince of Nothing/Aspect-Emperor fan artist Spiral Horizon has created a highly impressive map of Earwa, the continent that serves as the setting for Scott Bakker's novels. 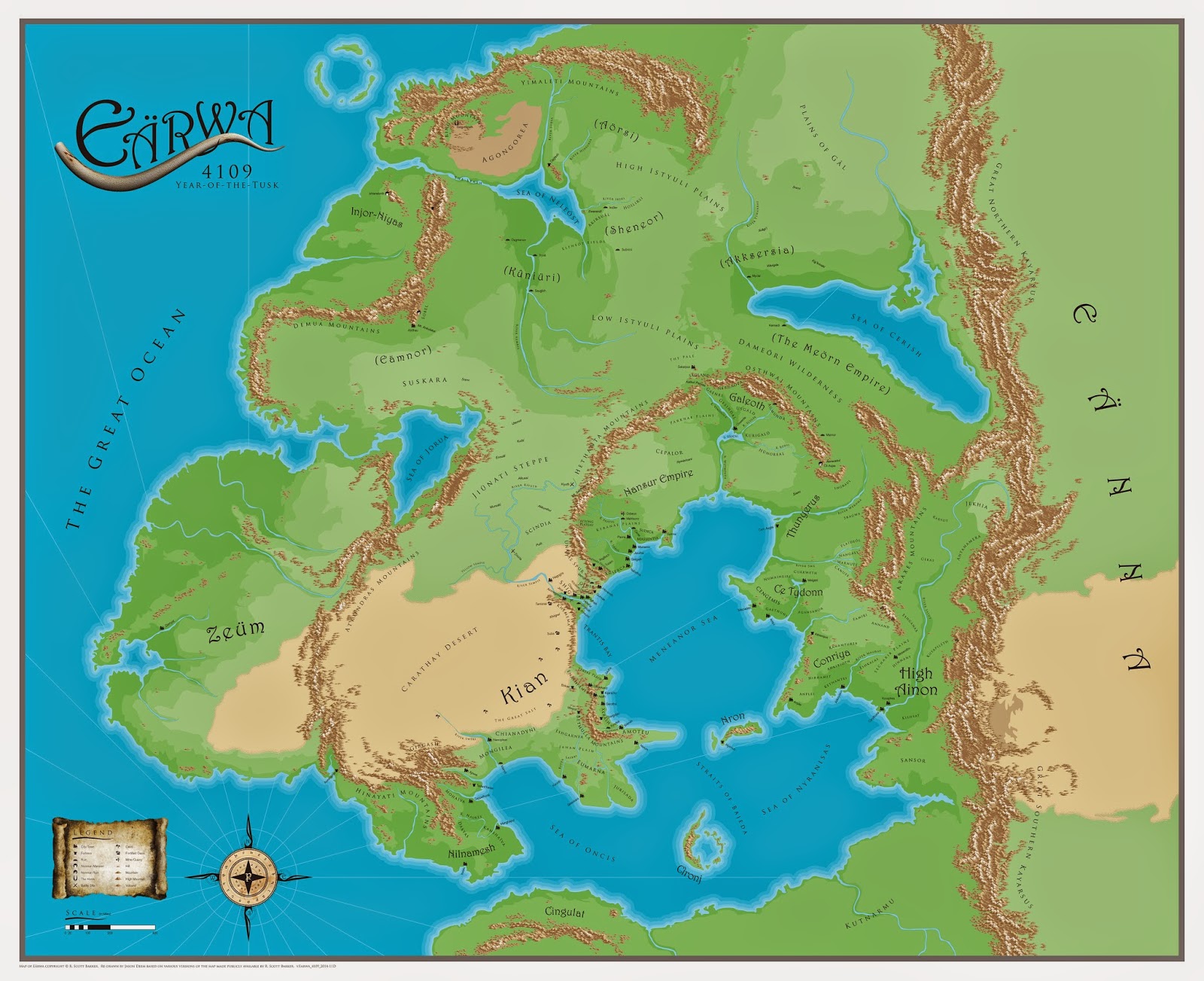 The map is based closely on the novels and also digital maps that Bakker has published on his website. The map depicts Earwa just as the novels are beginning, at the start of the Holy War. The maps use confirmed locations and details from all five published novels, although the scale is speculative. The novels and Bakker's comments have been mildly contradictory on matters of distance and size, and the scale represents a compromised 'best guess' of things until Bakker himself comments on the issue.

Meanwhile, Bakker has published his original rough working map of Earwa (drawn c. 1984) on his website. Curiously this map includes the 'mountain rings' shown on the digital maps which some fans had dismissed as graphical artifacts. However, these are now confirmed as deliberate. Whilst the rings around Golgotterath - presumably formed by the crash of the Ark of the Heavens, the bad guys' organic starship - have an easy explanation, the others do not. Curious. 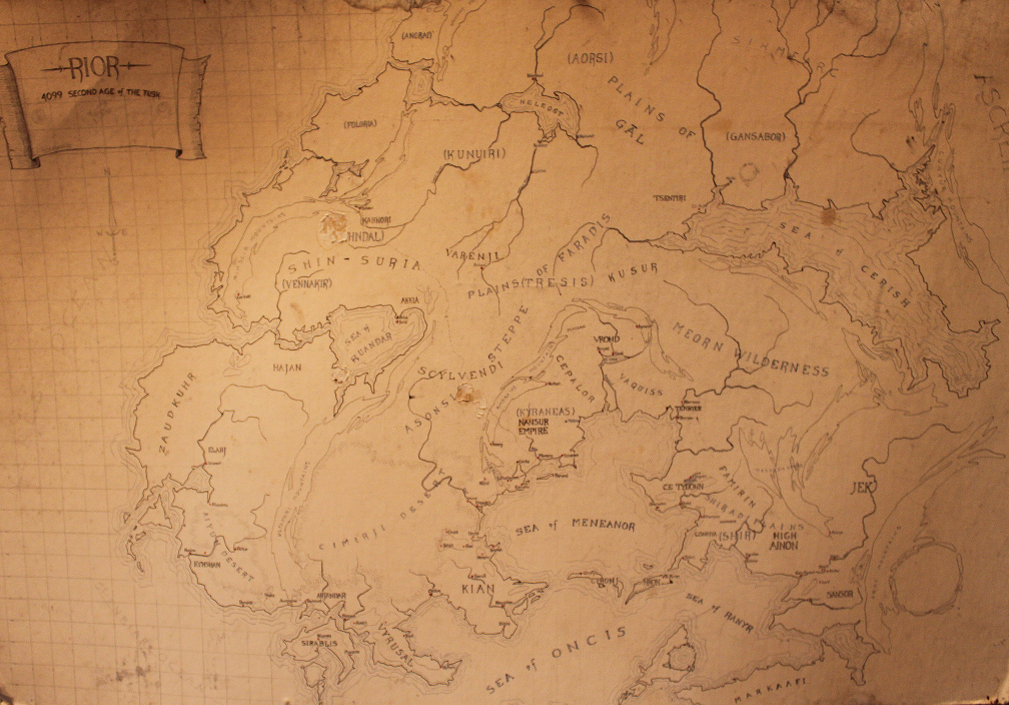 Bakker has also clarified confused reports that the Second Apocalypse mega-series will conclude with the publication of the final Aspect-Emperor book, The Unholy Consult. These were brought about by Bakker's claims that The Unholy Consult can conclude the entire series, despite previous claims that a further duology or trilogy would follow. Bakker has confirmed that his intention will always be to finish the final books, but without greater commercial success he will not be able to continue writing full-time and the final books will thus take a considerably longer time to come out. However, they will be done.

The Unholy Consult has been completed and is currently being edited. The novel's length - well over 300,000 words - has apparently led to the possibility of the book being split in half for publication. If this happens, the two new volumes would be called The Great Ordeal and The Unholy Consult. The series remains in the hands of Orbit (in the UK) and Overlook (in the USA), with Overlook also taking over Canadian publication after Penguin elected not to continue with the series. Publication plans for the new book, in whatever format, have not yet been revealed.
Posted by Adam Whitehead at 21:19

Email ThisBlogThis!Share to TwitterShare to FacebookShare to Pinterest
Labels: maps, news, r. scott bakker, the aspect-emperor, the prince of nothing, the unholy consult

Awesome. I just ordered a bumper sticker that reads, "Read R. Scott Bakker" I do my part to try and spread the word

Spiral Horizon's map is a thing of beauty.

So sad this series no longer seems to get the critical or commercial recognition it deserves. The Prince of Nothing series is what got me back into reading after Tolkien, because for a few years the only thing I could read was LOTR - until this came along everything else was just not as epic (hadn't heard of Malazan at this point!). I still rank it in my top 5 although I was in high school back then so I'm guessing it wouldn't be as awesome as I remember on a re-read 10 years later, but still I loved this world he created.

Just a heads up, in case you don't already know. There's more info about the map, which is a work in progress, from SH in this thread using the handle Somnambulist.

I just recently read the series and blogged reviews for each book. I will read and review the Aspect-Emperor series too. The Prince of Nothing is a true masterpiece, well worth re-reading. In fact I am planning to read it again after I finish 3 other series in my immediate reading stack. R. Scott Bakker is really brilliant. Have you seen the teaser chapters he posted from his new book? He published it on his blog, it's jaw-dropping awesome writing!

Tom Haynes: I'm sure this series will be just as awesome on a reread, even more so now that you're out of high school. This ain't Eddings we're talking about, there's a whole lot more under the surface.

This guy deserves more success than a LOT of the shite that passes for fantasy novels.
Achamian is one of the best wizards ever written in fantasy imo. A real human bean.
I hope they don't split the novel personally.

The Prince of Nothing series seriously strains my new commitment to only post positive comments online.

What an amazing map.

Tom Haynes, I couldn't disagree more. I guarantee a re-read would fairly blow your mind. From personal experience, and anecdotal evidence from others, the 2nd read through the series is almost like reading an entirely different work. The shear volume of hidden information you miss the first time is absolutely staggering.

@Tom
Well, this is Bakker's own fault IMO. The first trilogy was simply fantastic and epic in its scope and execution. The next books, starting with the Judging Eye, marked a steep decline in quality. Endless pages of quasi-philosophical ruminations, plot stagnation, blatant nods (read: rip-offs) to Tolkien (the Mines of Moria re-told) and a particular grating thing, hundreds of pages of the "heroes' journey without arriving". Of course this is only my personal opinion and tastes differ but it is no coincidence for me that the former publisher dropped the series. The drop in quality is just too obvious.

Nevertheless I sincerly hope for a return to glory for Mr Bakker and the series. I will check out the new book but will refrain from buying until I've read some respectable reviews. Twice burned..

Still waiting for your reviews of Neuropath and Disciple.

Started reading NEUROPATH and gave up after a few chapters. Bakker's premise is horrifying and effective, but I felt the quality of the writing was a major step down from his fantasy work.

I wouldn't mind trying DISCIPLE at some point, but with the to-read pile standing taller than my house and less time than ever to read, it'll be a long time before I get there.