Nineteen years ago, David Braben released the third game in his Elite series of space trading games. First Encounters was released ahead of schedule by the publishers, still unfinished and riddled with bugs. Braben and his team at the then-just-formed Frontier Developments sued the publisher, eventually winning an out of court settlement. But the damage had been done. Despite some patches to help fix the game post-release, it had gotten a bad reputation and sales were disappointing. 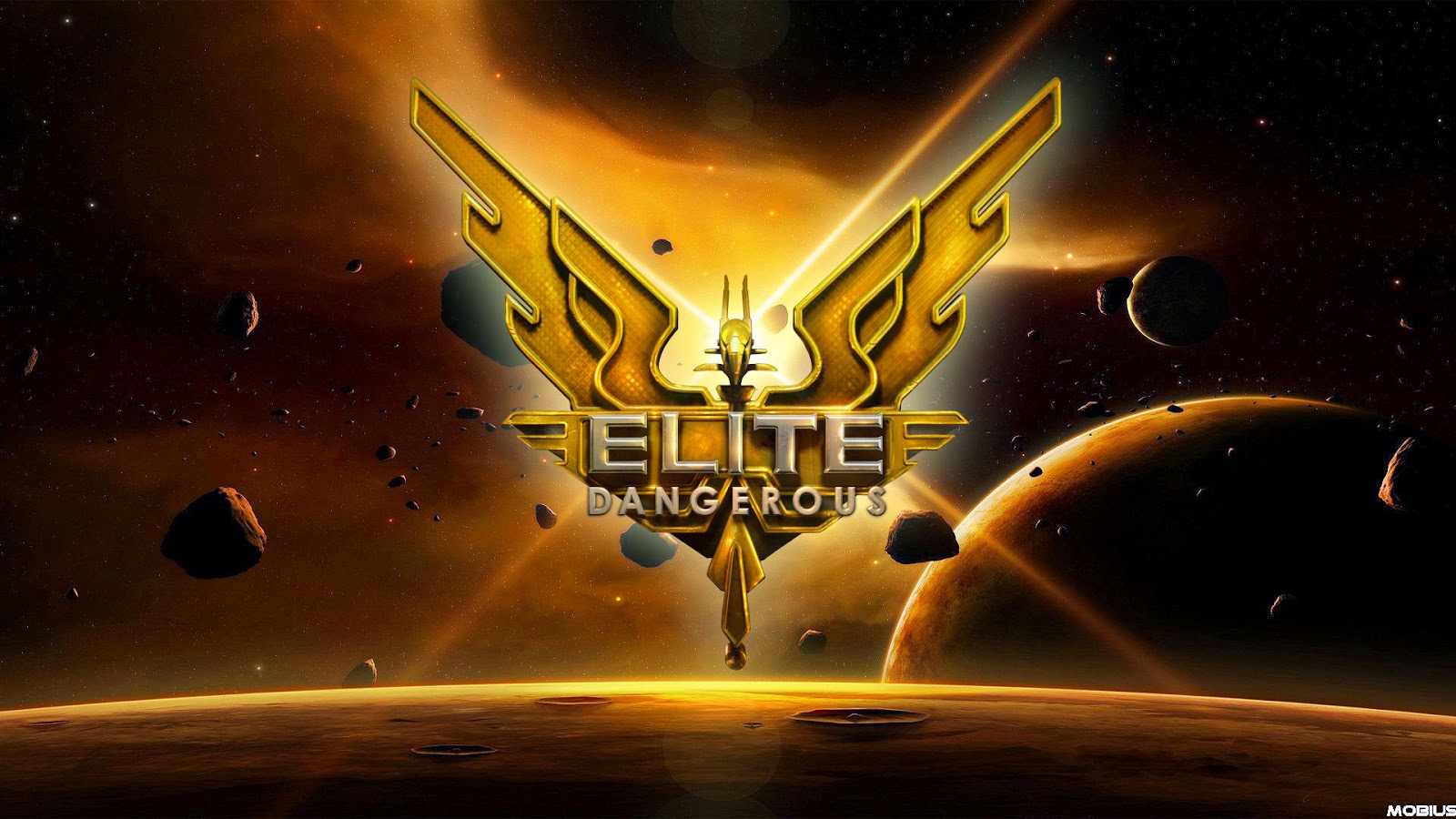 Braben decided not to repeat the mistake and would only release a fourth Elite game if publishers could be found willing to give him the freedom and time needed to make the game right. Despite several meetings and some interest, none were willing to do so. The fourth Elite game languished on the back-burner whilst Frontier Developments worked on numerous other games.

That changed in 2012 when the company took advantage of Kickstarter to fund a new Elite game. They raised over a million dollars and, combined with their own resources, they were able to create and develop the game independently, with no outside assistance. They threw open the doors of development, posting frequent updates and releasing an early access version of the game to backers.  Through multiple development periods, hundreds of players were able to see the game in action and report back on it to others. Whilst other space combat games promised everything including the kitchen sink, Frontier kept a laser-like focus on the basics: space travel, exploration, combat, mining and dynamically-generated missions. Other things, like landing on planets and walking around inside ships, was left for another day. In a remarkably short period of time - just over two years - the game's initial version was completed and released. 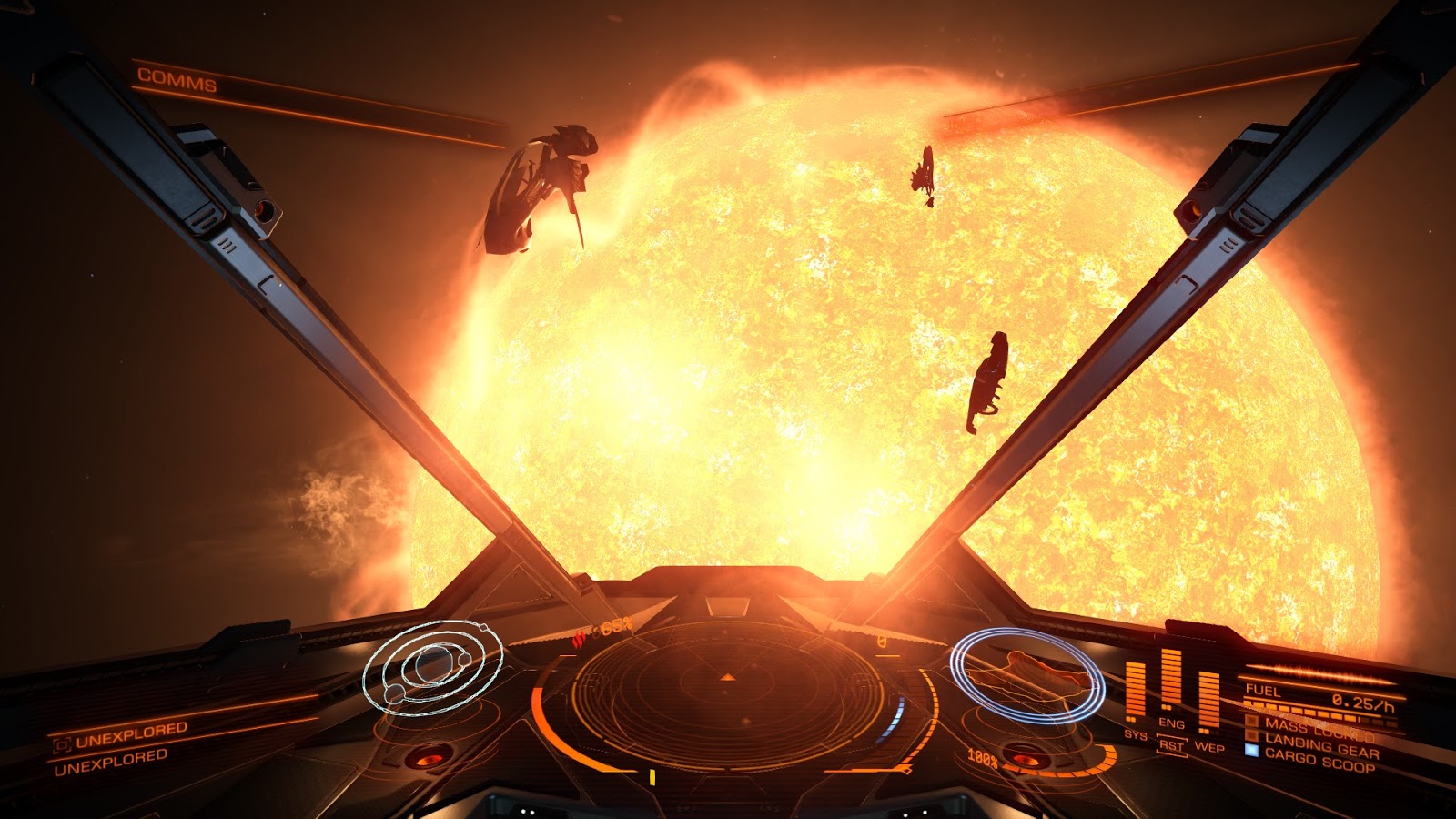 A conventional review of Elite: Dangerous is not really possible, at least not yet. In just ten days since release, Frontier have already released three major patches for the game and more are promised in the coming weeks, adding new control schemes, features and options. The game's storyline is rapidly evolving, changing and expanding. A new expansion next year will add the promised ability to land on planets, and it is whispered that the alien Thargoids are due to show up in force in the coming months. A review of the game will only be a snapshot of what it's like at the moment, not what it might be a few months down the line. 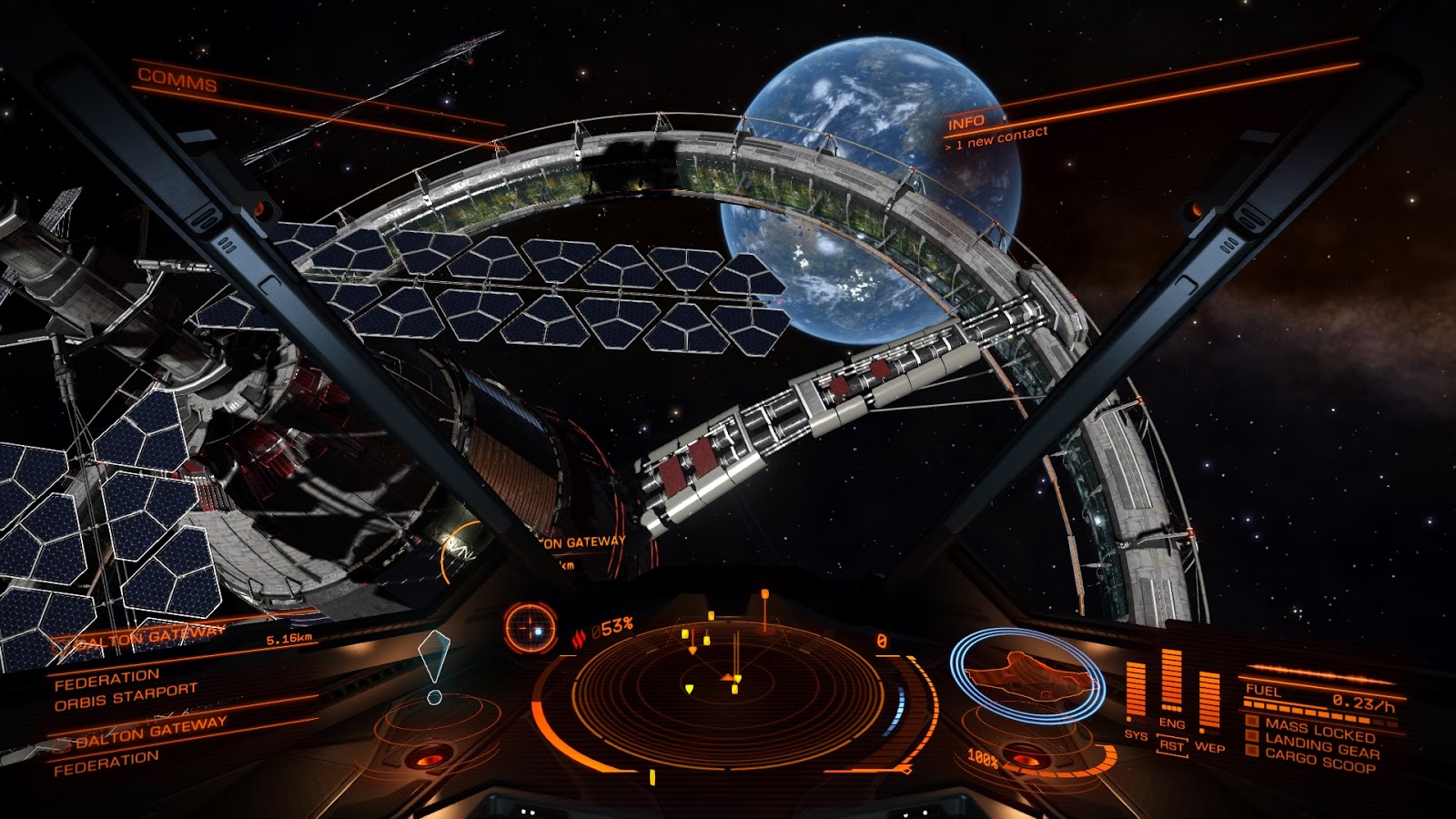 Still, there's enough meat on the initial release of the game to come to an early conclusion: this is easily the best space simulator game to be released since Freespace 2 way back in 1999. Given both Frontier and Braben's haphazard reputation for the quality of their previous games - even the previous Elite games were blighted by one serious design flaw or another - some cynicism was understandable, but Frontier have surpassed almost every expectation of them here. Having experimented with a fully Newtonian flight model in Frontier and First Encounters and discovering it wasn't very much fun to fly (especially not at interplanetary velocities), they have created an interesting fight model for Dangerous that mixes Newtonian physics with more fly-by-wire, jet fighter-like controls from space combat games. You can still enact a full Newtonian model at sublight speeds (by turning off flight assist), although this is still limited in speed to prevent the confusing morass of thrusting and counter-thrusting that the earlier games suffered from. Hardcore space sim gamers may be disappointed by this, but for many players it hits just the right spot between realism and fun. It's a particularly good fit for combat, allowing for some satisfying tactics as you spin and fire at enemy ships whilst continuing to fly in a different direction, use afterburners to enact a sudden change of direction and side-thrusters to avoid collisions at the last possible moment. Sublight flight and combat is rock solid, which is essential as they are the foundations of the game. 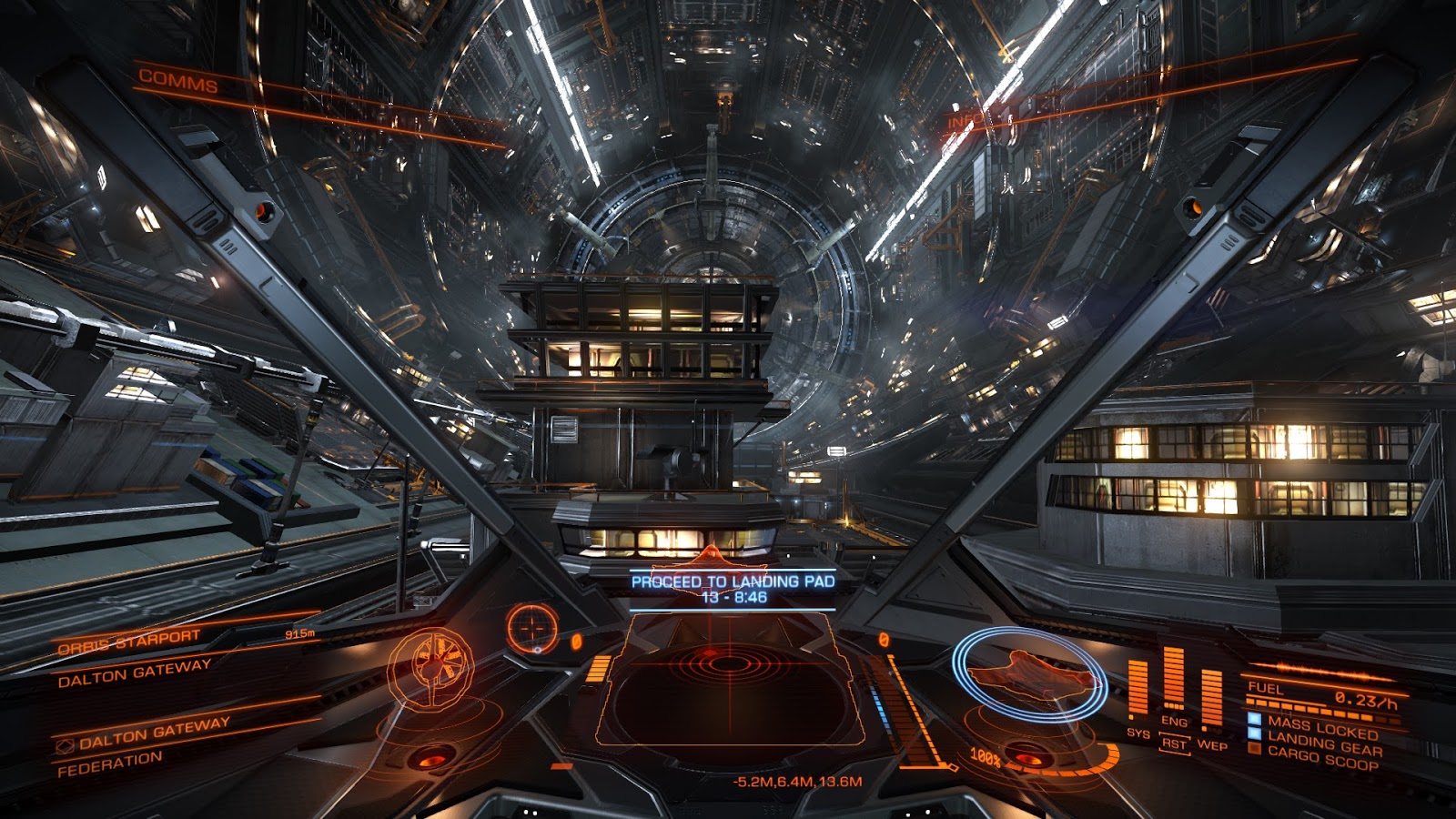 Slightly more awkward is the supercruise mode. This is the FTL drive that allows you to fly across systems in minutes rather than weeks, and is a compromise between the in-system microjumps of the original Elite and the time-acceleration of the second and third games. It's a cool feature to start with, allowing you to fly across systems quite fast, but soon the lack of an autopilot begins to get a little annoying. I get why they did this, as the autopilot in Frontier and First Encounters meant that the player pretty much had nothing to do unless combat erupted, reducing the player to a mere spectator for 90% of the game. However, constantly adjusting velocities (even within clear guidelines) and having to switch course to investigate nearby signal sources gets old after the first hundred or so trips. It's certainly not a dealbreaker, but it's an area Frontier probably should look at developing more to make less of a chore.

In terms of content, well, the entire Milky Way galaxy is in the same, with the 150,000-odd visible stars from Earth all in their correct positions. Stars with known planets have these in the correct orbits and enterprising players can even find the Voyager space probes on the edge of the Solar system in the position they really would be in 1,286 years time. The vastness of the game is both compelling and daunting. Using the galactic map is terrific fun, as you plot distances and courses, working out what route you should take to get to systems dozens of light-years away, and what trading runs and missions you can do along the route. There's a nice variety of missions and things to do in the game at the moment, from mining and courier work to mercenary contracts to the old favourite standby of trading. Unlike some of the previous Elite games Frontier have worked hard to make sure that whilst trading and mining are rewarding, you can do without them by simply doing the oddjob missions and still allowing you to get a lot of money relatively quickly. As you get richer you can upgrade to better and bigger ships (the most iconic ship in the series, the Cobra Mk. III, awaits you when you clear 300K) and take on more dangerous and challenging missions. 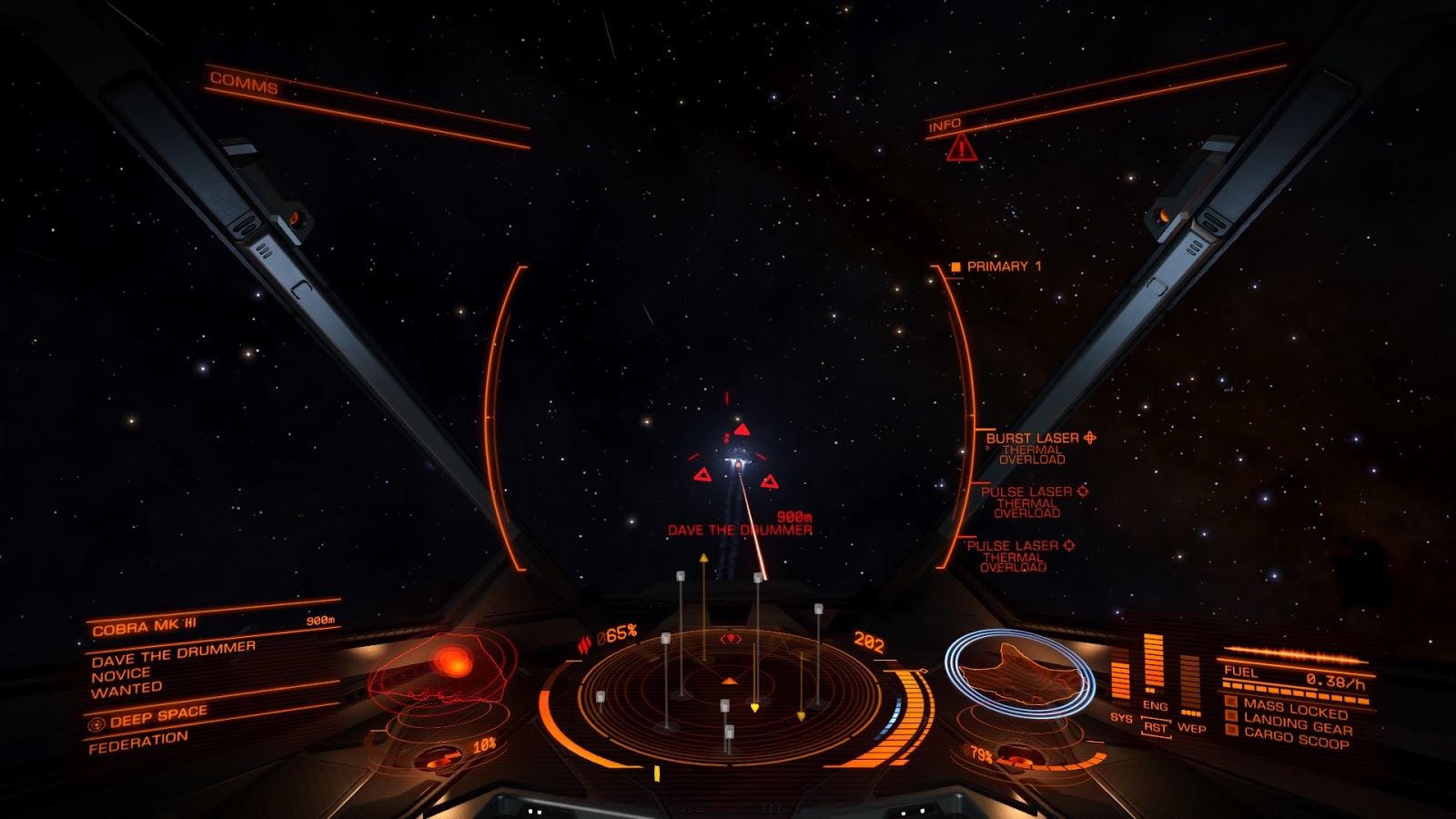 In terms of storylines, the game is pretty bare bones at the moment. There's a slave uprising going on in the Empire which players can support, and there's lots of dynamic storytelling possibilities in systems where the balance of power between factions is poised on a knife's edge. By doing jobs for one faction over another, you can even trigger wars and wide-ranging shifts in political power. A lot of this is more theoretical than actual at the moment, but if Frontier can deliver on the dynamic storytelling front the game will become a lot more compelling, not to mention justifying the last-minute removal of the offline mode.

In its current release, version 1.03, Elite: Dangerous (easily **** right now, if you need that score) is a highly compelling, gripping space sim game with a lot of content. I can see it getting a little repetitive after a few months if Frontier aren't able to deliver more new content on a regular basis, but if they can do that, then this could easily become the best space game of its generation.
Posted by Adam Whitehead at 20:50

I found the learning curve on this game a bit more than what I was expecting.

Got my first mission, went to target system and get blown up by some random NPC. I try again and can't get docking permission to enter a station so I can deliver some cargo or I end up in some weird escape velocity and get thrown off a few light years away. So far this game has been nothing but a pain in the bum.
Add to the fact that the default controls for the PC are horrible and all over the place. =/

the default controls are TERRIBLE. did the dev's even try and play their own game?
I just had a NPC blow me up for no apparent reason?

pain in the bum indeed. Im alsomt asking for my money back this game is so annoying.