Ursula K. Le Guin, one of the greatest writers of science fiction and fantasy of all time, has passed away at the age of 88. The cause of death has not been revealed, but it was known that Le Guin had been in poor health for several months. 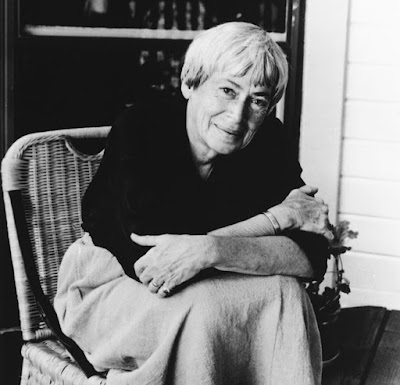 Le Guin's contributions to the field of science fiction and fantasy were legion, but she will be best-remembered for her seminal and defining Earthsea series, one of the earliest "YA" fantasy success stories, and several key and defining works of science fiction, most notably The Left Hand of Darkness (1969) and The Dispossessed (1974). She has won the World Fantasy Award, the Locus Award, the Hugo Award and the Nebula Award multiple times. Her fans and appreciators include Salman Rushdie, David Mitchell, China Mieville, Neil Gaiman, George R.R. Martin, Zadie Smith and Margaret Atwood.

Le Guin was born in Berkeley, California in 1929. She was the daughter of well-known academics, anthropologists Alfred Kroeber and Theodora Kracaw. She was raised in a happy family and inspired by her parents and their numerous academic friends, she started writing very early. Her first fantasy story was written at age 7 and by age 11 she'd started submitting short stories to magazines such as Astounding Science Fiction. Le Guin went on to achieve a BA in Renaissance French and Italian Literature and an MA in French and Italian Literature. She met and married Charles Le Guin in 1953, with whom she had three children, and she began publishing short fiction in the early 1960s.

“My imagination makes me human and makes me a fool; it gives me all the world and exiles me from it.”


In 1964 Le Guin published "The Word of Unbinding", the first story set on her signature fantasy world of Earthsea. In 1968 she followed it up with the first novel in the setting, A Wizard of Earthsea. The novel, unusually, attracted both tremendous critical acclaim and significant sales. She followed up the book with several sequels and other works set in the same world: The Tombs of Atuan (1971), The Farthest Shore (1972), Tehanu (1990), The Other Wind (2001) and Tales from Earthsea (2001).

A Wizard of Earthsea has been adapted for the screen twice. In 2005 SyFy produced Legend of Earthsea, which "whitewashed" the cast (in the original novel, the entire cast was dark-skinned) and lost all of the thematic subtlety and depth from the novel. The following year Hayao Miyazaki's Studio Ghibli released Tales of Earthsea, an animated film. Le Guin had enjoyed Miyazaki's My Neighbour Totoro and was keen to see him handle the movie, but was disappointed when he handed the project off to his son to direct, who in turn produced a more conventional action-adventure story with the resolution revolving around simply killing the villain (a choice Le Guin found boring).

“I do not care what comes after; I have seen the dragons on the wind of morning.”

Le Guin also had an ambitious cycle of future history stories, known as the Hainish or Ekumen novels. These novels were relatively individual in story and theme, but united by a shared (if not explicitly stated) history, partially defined by the creation of an interstellar communication device known as "the ansible" (a name cheerfully stolen by David Langford for his long-running SFF newsletter). The two-best-known works in this sequence are The Left Hand of Darkness, which explores the definition of humanity and identification on a world of shifting genders, and The Dispossessed, a lengthy and sustained interrogation of the left/right political paradigm.

Le Guin's other notable work includes The Lathe of Heaven (1970), about someone whose dreams intrude on and shape reality, and Lavinia (2009), her final novel, which explores the titular character from Virgil's The Aeneid.


“Love doesn't just sit there, like a stone, it has to be made, like bread; remade all the time, made new.”

In later years Le Guin found herself enjoying her status as an elder stateswoman of the genre. She praised authors coming up through the ranks, particularly Neil Gaiman and China Mieville, and forged a friendship with Canadian literary author Margaret Atwood. Atwood went through a phase of hating being called a science fiction author, but through several public debates Le Guin explored with her the idea that maybe it wasn't such a bad label after all (Le Guin herself struggled with the label when trying to be taken seriously as a literary author in the 1970s, before concluding it didn't matter).

Ursula K. Le Guin's output was modest compared to many other authors, but her impact on science fiction, fantasy and literary fiction was seismic. A Wizard of Earthsea, The Left Hand of Darkness and The Dispossessed are among the greatest works of speculative fiction ever written, her inspirational status in the field (especially to female writers, but to everyone who sought to layer greater themes and meaning into genre work) is unrivalled and her literary legacy formidable. She will be missed.
Posted by Adam Whitehead at 23:26

Email ThisBlogThis!Share to TwitterShare to FacebookShare to Pinterest
Labels: a wizard of earthsea, earthsea, memorials, the dispossessed, the left hand of darkness, ursula k. leguin

Came here as soon as I heard the news.
Yes, she will be missed.
Thanks for the write up.

RIP indeed. Thanks for putting this summary together.

[I hope the Nobel committee are kicking themselves...]

The only book I've kept from my adolescence (I'm now 48) was the single-volume trilogy of the first Wizard of Earthsea books. That says it all. RIP Ursula.