Two hundred years and one day ago, science fiction as we know it was created. 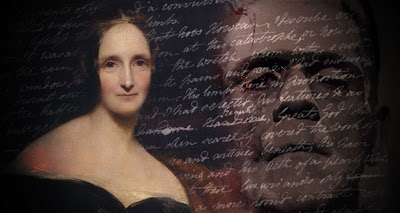 On 1 January 1818, Mary Shelley (nee Wollstonecraft) published her novel Frankenstein;, or The Modern Prometheus, a book she'd written two years earlier at the age of eighteen. The novel features the creation of an artificial lifeform through scientific processes. The book deals with the moral and ethical fall-out from this event, engaging with complex issues such as the rights of an artificial lifeform, slavery and the religious implications. The book was hugely popular on publication and remains so today; Isaac Asimov's Robot novels and short stories extrapolate on Shelley's premise, whilst every android and replicant from Lt. Commander Data to Roy Batty to Battlestar Galactica's Cylons grapple with the same issues.

Frankenstein's position as the first science fiction novel is occasionally disputed. The first extant work to  postulate the existence of alien life (and the possibility of military conflict with it) was True History by Lucian of Samosata (c. 150 AD). Jonathan Swift's 1725 novel Gulliver's Travels featured trips to remote corners of the globe to islands with internally-consistent (but otherwise purely fantastical) races and cultures. However, these works were not rooted in scientific plausibility or extrapolated on current knowledge, and instead were meant as comedies or satires. Isaac Asimov and Carl Sagan made arguments for Johannes Kepler's Somnium (1634) as the first true work of science fiction, but the book's narrative also features fantastical elements such as daemons which disqualifies it (arguments that the daemon may be some form of alien are not really substantiated). Margaret Cavendish's The Blazing World (1666) may hold a stronger claim as the first work of science fiction. Cavendish even wrote it as a way of attracting attention to her non-fiction work (most notably Observations Upon Experimental Philosophy). However, some hold that Cavendish's nods at science were more of an excuse to explore a world of talking animals, reachable by a portal at the North Pole.

However, Frankenstein's position as the first universally-recognised science fiction novel was assured by Brian Aldiss's seminal Billion Year Spree (1973), which argued that Frankenstein features the first time a protagonist makes a deliberate decision to use the scientific process to achieve a breakthrough to achieve an outcome with genuine scientific, philosophical and moral ramifications which remain relevant today.

In 1826 Shelley published The Last Man, a post-apocalyptic novel which postulates what happens to a group of survivors from a devastating plague that wipes out most of the population of the world. Shelley was probably inspired to write this novel by "The Year Without a Summer" in 1816, when she was writing Frankenstein, when there was a worldwide drop in temperature caused by a massive volcanic eruption at Mount Tambora in modern Indonesia. This period was marked by people believing the end of the world was at hand.

Science fiction is now entering its third century with Shelley's story remaining highly relevant, as the debates on stem cells, "designer babes" and genetic engineering all demonstrate.
Posted by Adam Whitehead at 17:40