According to an eagle-eyed viewer, evidence has emerged hinting that an adaptation of Joe Abercrombie's The First Law is in the planning stages in Hollywood, possibly at Sony (who, interestingly, also have The Wheel of Time in development). 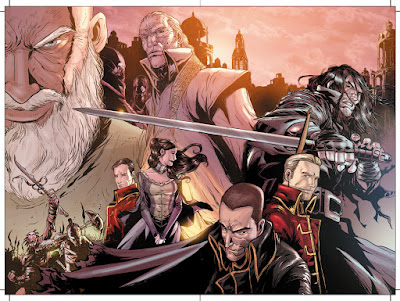 Rumours that a First Law TV or film project was underway began last year, with Deadpool director Tim Miller rumoured to be attached as a producer after he left the Deadpool sequel. Miller has since been attached to the latest attempt to get William Gibson's Neuromancer to the screen, but additional rumours have now put that project on hold as well, in the aftermath of the relative failure of Ghost in the Shell and Blade Runner 2049. Either way, Miller's name being attached as producer would be interesting.

The evidence is a leaked photograph from what appears to be a planning session for an adaptation of the book. Copies of The Blade Itself were in evidence, a map of the Circle of the World was pinned to a wall and whiteboards have breakdowns of scenes and characters on them. Another board has photographs of actors in costume from shows like Vikings and The Last Kingdom on them, showing potentially the visual look they'd be looking for. This could be relatively easily faked, of course, but it'd be quite a bit of work to go through.

According to IMDB, a First Law project is indeed in development with writers Jack Christian and D.J. McPherson (presumably not the singer-songwriter) attached, but neither have any prior writing or production experience, which would seem unlikely for a project of this scale and scope. This may have been a wishful-thinking project put up on IMDB (which can be edited by public users).

Still, all very interesting. If something is happening, I'm sure we will learn more soon.
Posted by Adam Whitehead at 23:03