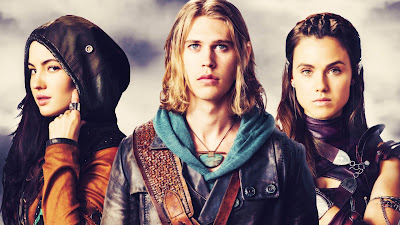 The TV series, based on the fantasy novels by Terry Brooks, debuted on MTV in 2016 before moving to Spike for its second season last year. Spike has been rebranded the Paramount Network, which is inheriting many of Spike's shows but not Shannara. The fantasy show featured extensive visual effects and location shooting in New Zealand, so was on the expensive side. With the second season (which, by looks alone, had already had a significant budget cut) bringing in only 500,000 viewers even after time-shifted and online viewings were factored in, it's unsurprising that Paramount was unwilling to move forwards with a third season.

The producers, Sonar Entertainment, may choose to shop the show to other channels, but the indifferent audience reaction, poor ratings and relatively high price tag make this unlikely.

The first season of The Shannara Chronicles was mediocre, but had flashes of good fun and had some good performances from the likes of Manu Bennett and Ivana Baquero. The second season (I've seen about half of it so far) was unfortunately notably inferior, looking considerably cheaper with much less story focus and spending too much time on the show's wooden lead.

Shannara follows Legend of the Seeker and Camelot into premature retirement and serves as a reminder to networks that if you want to build on Game of Thrones' success, you really need strong source material and writers who know what they're doing, not just deep wallets.
Posted by Adam Whitehead at 18:23

I didn't even get through the first episode, and I've always loved the Shannara books. I'm even one of the few who loved Sword of Shannara more than the others. Quality matters.

I must admit, I've always been baffled by this idea that the best way to emulate Game of Thrones, based on a well-written, complex and in many ways surprising fantasy series, is to concentrate on making shows based on badly-written, simple and predictable fantasy novels.

[for instance, Robin Hobb - both the Fitz books and the Liveship books would adapt really well to TV, and would be much cheaper than some fantasy series to film. (presumably they'd go with Fitz, for the greater potential number of seasons, but Liveships I think would probably be the more natural fit for TV).]

I can only assume the people in charge are just idiots, who don't bother properly researching their options...

good riddance. That show was an embarrassment. I could only get through maybe half the first season even trying very hard.

I really enjoyed The Elfstones of Shannara. The first season's attempt at an "adaptation" was so poor, I couldn't fathom watching the second. I mean, there was an episode where they went to a small town with electricity and were watching old episodes of Star Trek! Who thought this was a good idea? I for one am GLAD the show is dead. Maybe someday, someone who actually wants to film the stories Terry Brooks wrote will get their hands on them. The sooner we forget this show existed, the better.