WHEEL OF TIME showrunner tweets that he is rereading the books

Rafe Judkins, the Sony-appointed showrunner of their potential Wheel of Time TV series, has tweeted that he is rereading the first three books in the series, presumably as part of the prep work for the series. He also notes that he is reading Brandon Sanderson's Oathbringer as his current leisure reading. 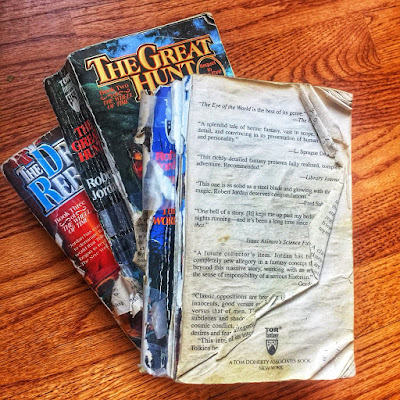 Although Sony have committed to producing the Wheel of Time TV show, they have not yet found a network production partner. According to strong rumours, they were close to a deal with Amazon TV which was then relegated by Amazon's decision to develop a Lord of the Rings prequel project instead. Although it's not impossible that Amazon would develop a second very expensive epic fantasy series (they can afford it), it would seem to make the project less likely.

Other possible partners mostly seem to be sewn up with their own fantasy projects: Netflix with The Witcher, Showtime with The Kingkiller Chronicle prequel series, Starz with American Gods (and Outlander), SyFy with The Magicians and Paramount with Shannara. That leaves some possibilities, such as CBS All Access (who need more content beyond Star Trek: Discovery, stat), AMC (although they are unlikely to be able to afford it) or FX.

FX is an interesting possibility, both for their own productions (including the high-budget, well-regarded Fargo), the fact they aired the "Winter Dragon" pilot/advert thing from three years ago and they are now owned by Disney, who may be interested in a big epic fantasy project, either for FX, Hulu or their new, adult-oriented streaming channel they are currently developing (which will have both a Star Wars live-action show and a Marvel Cinematic Universe series for its launch in 2019 or 2020).

It was FXx, not FX, that "aired" Winter Dragon. However, it was a paid airtime spot. Red EAGLE had purchased infomercial time and aired it themselves.