Fourteen years after the end of the Clone Wars, the Galactic Empire seems to be invulnarable. From Coruscant, a colossal bureaucracy rules over millions of worlds through thousands of warships and a vast number of troops. Resistance appears futile. But there are those who believe otherwise, and from the lowliest depths of the poorest planets to the halls of the Galactic Senate itself, a rebellion is taking shape. Fighting this rebellion will not be easy, or pretty, or easy, and to start it requires a single victory, small in scope but enough to start the avalanche. 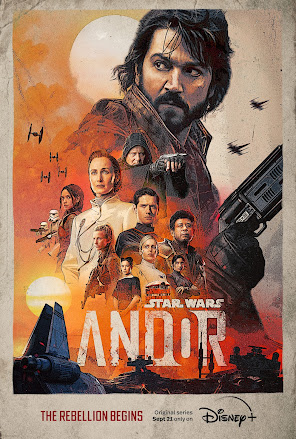 When Lucasfilm was putting together its initial package of live-action Star Wars TV shows, the one about Cassian Andor, a relatively low-key character from Rogue One, always seemed like the most random and least interesting. An Obi-Wan show? Sure, that makes sense. A show about Mandalorians? Cool. A Boba Fett series? Why not? But this guy? Diego Luna gave a great performance and there were some interesting edges around this more amoral, ruthless rebel operative, but he didn't exactly seem to be screaming out for more backstory.

Andor's first season proves that guess completely wrong, and unexpectedly emerges as the best of the live-action Star Wars shows to date, knocking the underwhelming Obi-Wan and disappointing Book of Boba Fett into a cocked hat, and even shading the fun Mandalorian. Coming across as the answer to the question, "What if Star Wars was on HBO?", Andor is a serious, adult SF drama about totalitarianism, the price of freedom, the perils of resistance and ultimately how the smallest acts can have huge ramifications.

The show nominally focuses on Cassian Andor, with Diego Luna returning to play a younger, cockier version of the character from Rogue One. Flashbacks reveal his backstory as a young child on a planet left ravaged by an unexplained disaster, whilst his present-day story sees him recruited by Luthen Rael (a fantastic Stellan Skarsgård) from his adopted homeworld of Ferrix to take part in a rebel raid on the planet Aldhani. The raid triggers a massive series of reprisals by the Empire, with the Imperial Security Bureau sending its best agents to track down those responsible. Andor absconds from the cause the first chance he gets, only to wind up, ironically, getting arrested and sentenced to an Imperial prison facility under a false identity. There he has to learn to become a leader and a facilitator for his fellow inmates, and sets about recruiting the reluctant floor manager Kino Loy (an outstanding Andy Serkis) to his cause.

However, one of the show's smartest moves is using Andor as the connective tissue between the ground-level story of how the Empire is crushing the common people, exemplified by Andor himself, and a much higher-level story in the Imperial Senate, where Mon Mothma (Genevieve O'Reilly reprising her role from Rogue One and Revenge of the Sith, the only high-profile actor apart from Luna and Forest Whitaker as Saw Gerrera to return from the films) is trying to simultaneously present herself as a harmless, bleeding-heart irritant against the Emperor's tyranny whilst secretly funding the establishment of the Rebel Alliance. When the financial web she's spun to carry this out is abruptly broken, she urgently needs to find a way of covering her back before the Empire discovers and destroys the Alliance before it can even get going.

In some senses Andor is an atypical Star Wars show: there's only a single, brief space battle and only a few ground-based action scenes. Much of the show seems to revolve around taut conversations between desperate individuals. The Empire is frequently presented as a mildly boring bureaucracy packed with functionaries just trying to get through the day so they can go home, rather than psychopathic maniacs. One major storyline revolves around financial dealings and shadow accounts and distasteful criminal deals like an episode of The Wire. It's also a decidedly more adult show: sex is alluded to more than in most Star Wars material, we get our first blink-and-you'll-miss-it bit of swearing in the franchise and character motivations are much more the focus, rather than cool spaceships or droids (though we do get at least one great new spaceship and a somewhat sympathetic robot with B2EMO).

It's a bold step but also a necessary one. Star Wars is now a transmedia franchise that is clearly never going to entirely stop this side of the end of human civilisation, but it can't do that if it doesn't broaden its tonal horizons and become a much broader church than what it has been up until now. Lucasfilm has been reluctant to do that - after hiring Phil Lord and Christopher Miller to make a more comedic Star Wars movie with Solo, they panicked when the directors did exactly that and fired them - but seems to have now gotten the message. How far this will go remains unclear: will we eventually get Star Wars the romantic comedy (no, Attack of the Clones does not count) and Star Wars the horror franchise? Maybe. But starting that broadening with Star Wars: The Prestige Streaming Showcase isn't such a bad idea.

Andor works because it shows us in a very real way how day-to-day life in the Empire works. It doesn't actually appear to be that bad, as long as you keep your head down and work hard and don't speak out, and you might even get a promotion and fancy you can work inside the system to your family's benefit, or try to make things better. But the insidiousness of the Empire is clear, as it beats and crushes the spirit out of people slowly, day by day. Star Wars has always nodded a little at Nineteen Eighty-Four with its depiction of the Empire, but that influence is much stronger here, with a bit of Brazil-esque surrealism thrown in as well (particularly with Syril Karn's story). The effort it takes for people to "wake up" and realise they have to fight is startling, but once that ball starts rolling it becomes difficult to stop.

Andor does have some flaws. The pacing is deliberate and measured, and for the most part that works well. However, there's at least one episode's worth of material that could have been shaved off to make an even tighter, sharper show. There's also some creaky continuity gaps between Andor and the rest of the franchise: The Bad Batch established that resistance movements against the Empire began almost immediately after its founding (with Andor character Saw Gerrera playing a leading role!), and Rebels, set almost simultaneously with this show, seems to suggest the Rebel Alliance should be much further along the road to being the spaceborne insurgency we all know. Having the Rebellion in a much more nascent form here doesn't seem to be quite right. Others will bemoan a Star Wars show without more action, or one they can't perhaps as easily sit down to watch with their kids.

That said, it's hard to argue with quality. Andor's first season (****½) is an impressive, adult science fiction drama that interrogates many of the ideas and premises of the Star Wars franchise that we haven't seen in live-action before (some of the novels and video games have trodden this kind of ground, though), and restores hope to a franchise that was in danger of becoming moribund.

The season is available to watch now worldwide on Disney+. A second season is in production for airing in 2024.

Thank you for reading The Wertzone. To help me provide better content, please consider contributing to my Patreon page and other funding methods.
Posted by Adam Whitehead at 21:56

Great review and I couldn't agree more with your thoughts on the show. It was brilliant and I can't wait for more.

" the Rebel Alliance should be much further along the road to being the spaceborne insurgency we all know"
There is nothing that says that that process happens at different speeds in different parts of the galaxy...